GREENFIELD—When drivers refuse to stop for police, most agencies agree officers should chase after them.

But what's the best way to end a pursuit?  FOX6 Investigators show you the aggressive and controversial technique that has local police chiefs split.

Every year, police in the Milwaukee area chase after hundreds - even thousands - of drivers who refuse to pull over. And some say the longer they allow a chase to go on, the more likely it is something bad will happen.

And that's why Greenfield police are focused not just on starting pursuits but ending them.

"What we are trying to do is stop that chase as early as we can," said Ray Radakovich, Assistant Chief of the Greenfield Police Department.

How they stop a chase is literally a matter of life and death.

"I mean, you don't have to kill somebody just for a red light," said Jaimie O'Brien, whose son died in a crash after leading police on a high-speed chase in 2018. Police say Nicholas O'Brien rolled through a red light, then refused to stop when an officer tried to pull him over.

"They are the ones that are going to hit and kill people," Radakovich said. "Those are the people we need to stop," 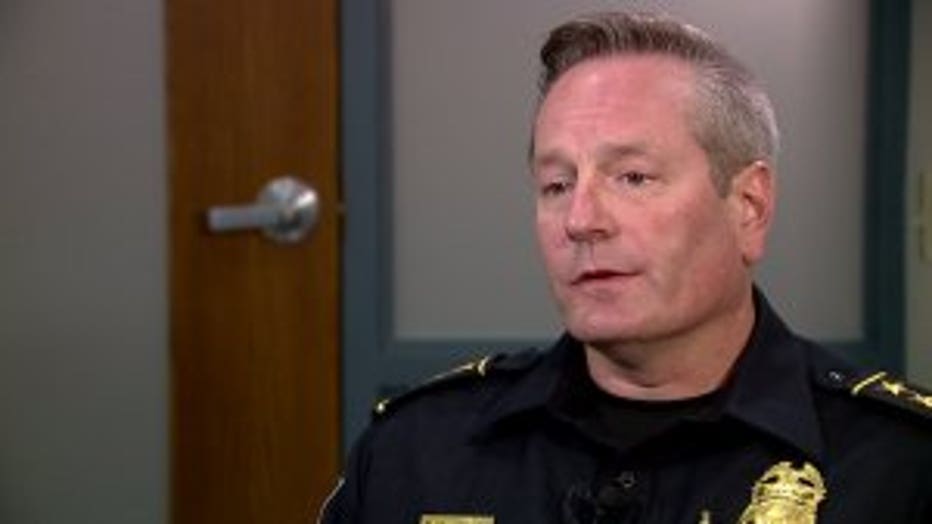 Most departments allow officers to use tire deflation devices, such as 'Stop-Sticks,' to disable a fleeing vehicle in hopes the driver will stop and surrender peacefully.

Some agencies allow officers to set up roadblocks or to "box-in" a moving vehicle with squad cars. Some also allow for squad cars to guide a fleeing vehicle in specific directions - a technique called 'channeling.'"

But a FOX6 Investigation of 20 local police agencies finds only a handful allow their officers to perform PIT maneuvers.

"The PIT is not something to be taken lightly," Radakovich said. 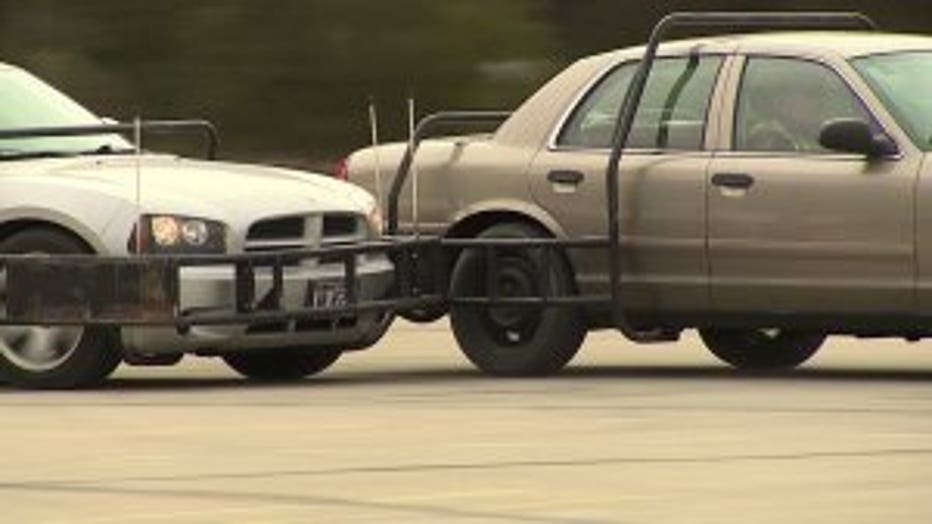 Most departments prohibit officers from ramming into suspect's cars, except in extreme situations that warrant the use of deadly force. Radakovich explains, however, that the PIT maneuver is not a 'ramming' technique. It's controlled contact.

"The softer you can touch the car the better," Radakovich said. "Break that traction and cause it to spin."

For years, the Wisconsin State Patrol has trained officers across the state on how to do PITs safely, but our investigation finds most agencies in Milwaukee County still don't allow them.

Of the 20 agencies we polled, fewer than half (7) send officers for PIT training. And just three (3) of those departments do 95 percent of all PITs in the county: West Allis, Glendale, and Greenfield. 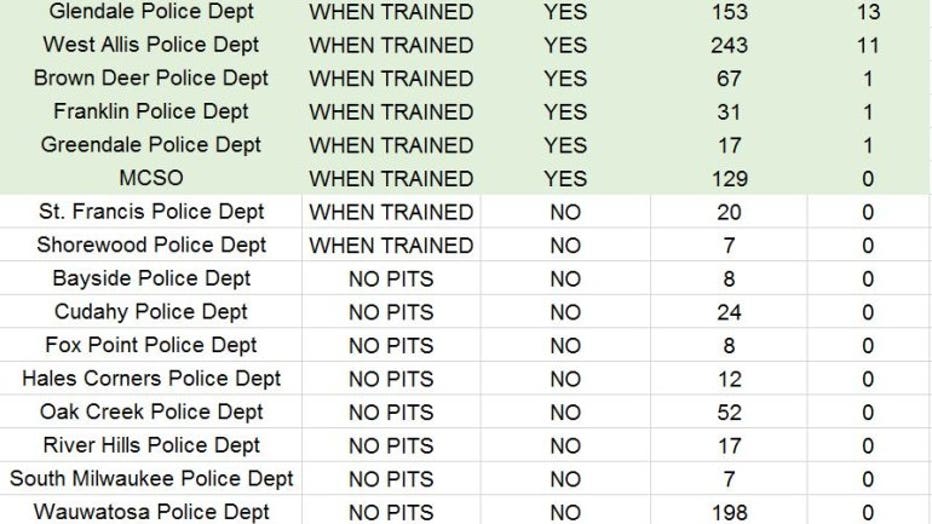 Greenfield alone has attempted at least 34 PIT maneuvers for the past two years.

"We're not going to let you just drive away from us," Radakovich said.

Last fall, Greenfield officers used the PIT maneuver while pursuing a van full of suspects wanted in a string of retail thefts in three states. In this case, the fleeing van flipped onto its roof and struck a highway light pole. But the aggressive stop resulted in arrests and criminal charges against four men accused of stealing more than $1 million worth of merchandise.

Some drivers weave and change speeds to keep officers from getting in position. Others regain control and keep going anyway.  Still, others careen across medians or slam into fixed objects putting innocent bystanders- even passengers in the fleeing vehicle--at risk.

"There is just too much potential for bad things to happen," Weber said. 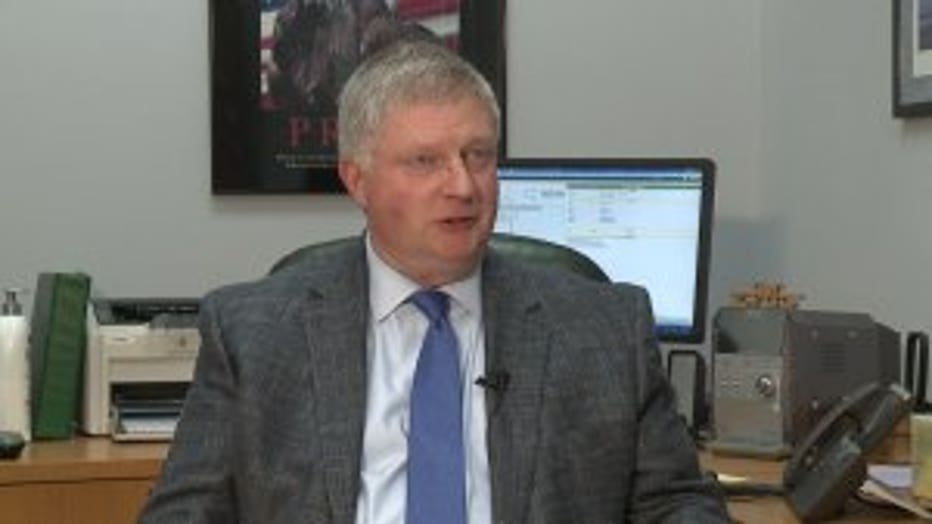 Wauwatosa Police chase more than 100 vehicles every year, third-most in Milwaukee County.  But Chief Barry Weber won't allow his officers to do PITS.

"I have said from day one we are not doing that here. Just not going to do it," he said.

For one thing, there's the cost.

"We have a 30 or 40 thousand dollar squad car owned by the taxpayers basically and we do damage to that," Weber said.

"Maybe the guy swerves or speeds up or something and we do it wrong, we are putting our cop in a possible deadly force situation," Weber said. 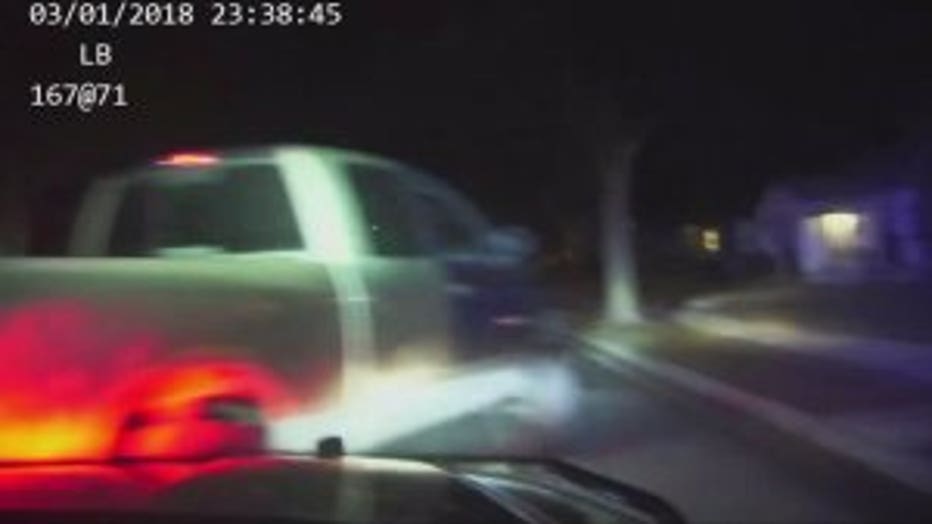 On March 1, 2018, Greenfield Police Officer Nicholas Meyer used a PIT maneuver to stop a fleeing vehicle after the driver refused to comply with a traffic stop. The PIT was performed at 62 mph, sending the truck crashing into a tree. The vehicle's op

That's what happened two years ago when Greenfield Police say a truck rolled through a red light then took off when an officer tried to stop him. The high-speed pursuit through narrow, tree-lined streets ended near 25th and Ohio in Milwaukee. Greenfield Police Officer Nicholas Meyer pulled up along the right side of the truck, snapped his steering while to the left, causing the truck's rear wheels to swing out to the left. The truck hurtled out-of-control, sideways into a tree.

"Car's up against the tree, it's a pretty bad crash," Officer Meyer said over his police radio moments after the violent impact.

25-year-old Nicholas O'Brien was killed. His father, Jaimie, still can't understand why the officer picked that location to perform a PIT - a residential street lined with large trees and small front yards.

"This is not a place to be doing a PIT maneuver at 62 miles per hour," O'Brien said. "Either you're gonna hit a tree or a house."

"Can't comment on that," Radakovich said when asked about the crash by the FOX6 Investigators.

While it's been nearly two years since the crash, Radakovich says the window for a civil lawsuit is still open. However, Milwaukee County District Attorney John Chisholm cleared Officer Meyer of any criminal misconduct, writing that his "actions were privileged." Chisholm cited Meyers' extensive training as an "extremely important" factor in his decision.

"Our philosophy is that everybody from the chief to the newest officer is trained," Radakovich said.

But the agency that conducts that training recommends PITS only be used at low speeds. Our investigation finds, even after the fatal crash two years ago, Greenfield officers have continued to conduct high-speed PITS. One at 53 miles per hour. Another at 54. Still others at 56, 66, even 73 miles per hour.

Greenfield allows officers to perform PITS at any speed.

"That didn't seem like a very practical limit to have," Radakovich said.

Last fall, a Greenfield officer pitted a reckless driver into a tree. It was a strikingly similar crash to the one that killed Nick O'Brien. Only, this time, the driver survived.

"If you don't want to have negative contact with police, don't commit a crime," Radakovich said.

"We all want to catch some bad guy. Don't get me wrong," Weber said. "We want to do that. But at what cost?"

"What's your end goal?" Radavoich asks. "If we don't utilize these things, we are simply following a car around the city at high rates of speed." 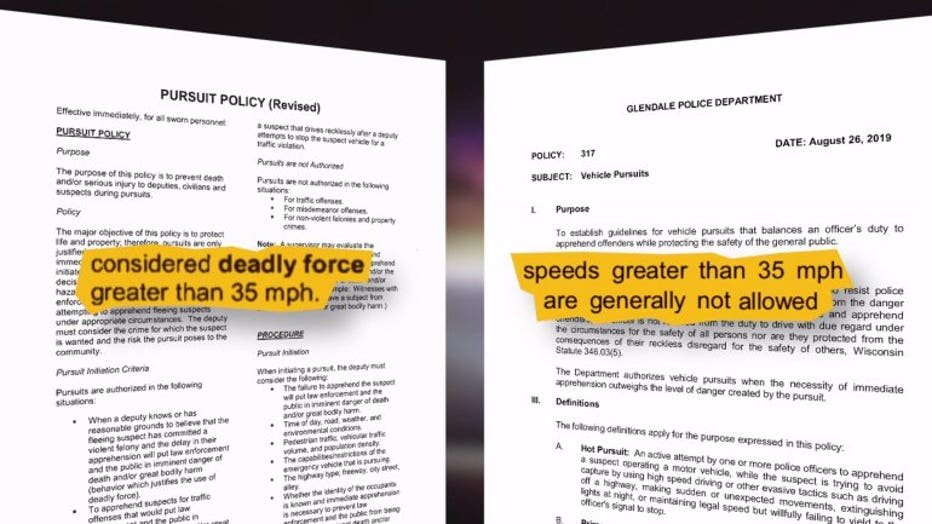 The Wisconsin State Patrol limits its own patrol officers to using PIT maneuvers at speeds of 35 mph or lower unless the situation justifies the use of 'deadly force.' The Milwaukee County Sheriffs Office and Glendale Police have the same limit. Gree

According to data from the Wisconsin State Patrol, between September 2018 and August 2019, Greenfield Police performed 25% of all PIT maneuvers Statewide. More than half of those PITs took place during pursuits that started with a traffic violation, like speeding or running a red light. Only three involved a known felony suspect.

As for the cost, Greenfield police say "it's not cheap," but could not provide an actual dollar figure for PIT maneuver related damage. Instead, the department provided FOX6 with more than 150 pursuit reports it has submitted to the state over the past 2 years. Those reports include damage estimates for squad cars, pursued vehicles and damage to property or vehicles not involved in the pursuit.

Those records show Greenfield Police pursuits have resulted in an estimated $300,000 worth of damage, more than half of which involved chases with a PIT maneuver. That includes more than $70,000 dollars in damage to Greenfield squad cars from PITs.