Robert Verhelst, a fireman who took part in the search and recovery efforts after the twin towers collapsed, explains what the 9/11 RIde of Hope is and why it's so important to first responders. (Source: LiveNOW from FOX)

As Americans commemorate the 20th anniversary of the Sept. 11, 2001, terrorist attacks, a group of cyclists will be wrapping up their five-day, 225-mile journey raising awareness of the compounded daily trauma experienced by first responders.

The Quell Foundation is calling it the 9/11 Ride of Hope and it will take 20 active, retired and surviving family members of first responders from New York City to Arlington, Va. Many of the participants responded to the terrorist attacks two decades ago.

Robert Verhelst, a fireman who took part in the search and recovery efforts after the twin towers collapsed, is traveling with the group. Reflecting on his arrival at Ground Zero in the wake of the attacks, Verhelst said he wasn’t ready for what he saw as a 23-year-old.

RELATED: Americans asked to honor 20th anniversary of 9/11 through service

"Your hope goes away," Verhelst explained. "You start to ask yourself a lot of ‘why’ questions, and a lot of those questions never have answers."

According to Kevin M. Lynch, CEO and president of the Quell Foundation, first responders are more likely to die by suicide than in the line of duty.

"These Americans who have dedicated their life to protecting, and saving ours, are taking their own at unprecedented rates," Lynch explained in a news release. "The deteriorating mental health of our country’s first responders is at a critical point."

Verhelst said the Ride of Hope aims to change that, bringing together a group of people that share one of the most infamous traumas and creating a space to talk about them. 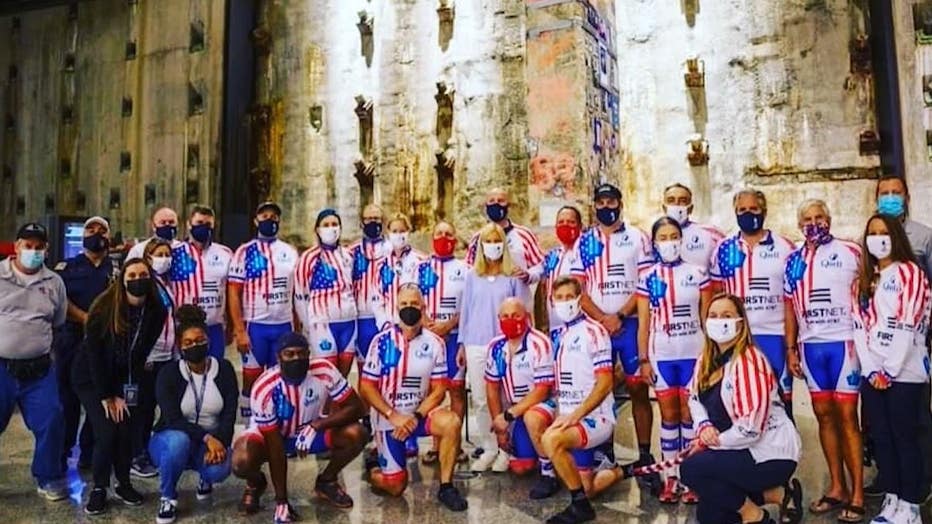 The 9/11 Ride of Hope will take 20 active, retired and surviving family members of first responders on a bike ride from New York City to Arlington, Va. (Source: The Quell Foundation)

But beyond erasing the stigma of mental health among themselves, the ride is raising awareness among their active-duty peers along the way.

RELATED: Never forget: A timeline of events on September 11, 2001

Funds from the ride will go toward the development of the Quell Foundation’s first responder mental health preparedness and training program.

RELATED: 9/11 Victims Compensation Fund: Where does it stand?

He said after spending many years feeling lost, one of the things that restored his hope was focusing on the positives, such as the unity that swept the nation in the aftermath of the attacks.

"One of the positives that I did finally realize from that day was all the people that came together for the common purpose of moving forward as humans," Verhelst said. "We didn’t have any gender, race, creed, age, political affiliation. We all moved forward together. And when the 20th anniversary of 9/11 happens, people need to look at that and go ‘we can do this again, we can move forward together.’"