CALEDONIA -- Family members of a 39-year-old father and his nine-year-old daughter who were tragically killed by a drunk driver in a rear-end crash on Friday, November 25th in Caledonia issued a statement on Sunday, November 27th -- and they said the six-year-old girl hurt in this crash has been released from the hospital.

39-year-old Kevin Dalley and nine-year-old Emily Dalley were killed in the crash that happened around 4:45 p.m. Friday.

Kevin Dalley was traveling with his nine-year-old daughter and his six-year-old daughter on 4 Mile Road, when police say a drunk driver rear-ended their vehicle at a high rate of speed when they slowed to make a turn on Old Farm Road.

Kevin Dalley and Emily Dalley were killed. The six-year-old girl was hurt.

"It's the holiday season and their holidays will never be the same," said Lieutenant Gary Larsen, Caledonia Police Department. "All because some guy has to go out drinking and do something horrible."

A relative said Kevin Dalley and two of his three daughters were returning home from a Thanksgiving dinner when their car was hit.

The alleged drunk driver involved in the crash, a 25-year-old Racine man, was arrested on two counts of homicide by intoxicated use of a vehicle. This is his second OWI.

"There's nothing that will put their lives back together," said Larsen. 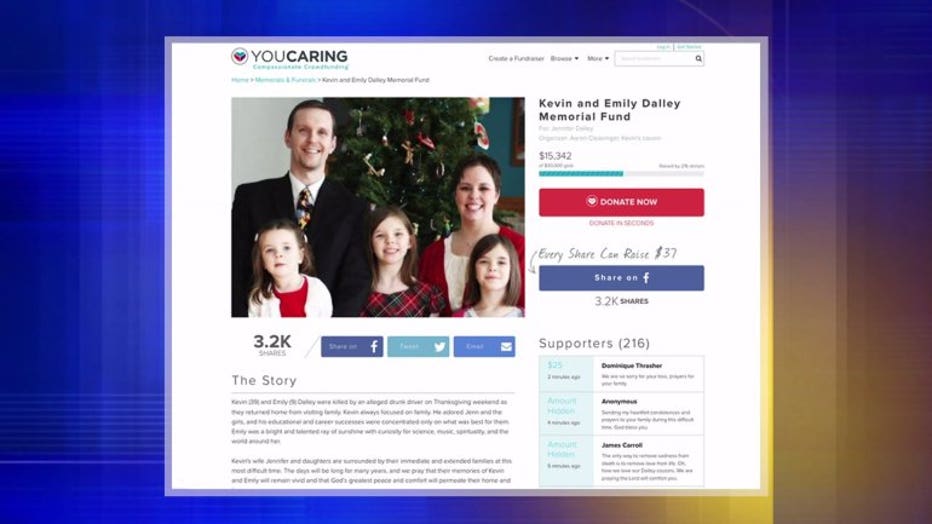 Kevin (39) and Emily (9) Dalley were killed by an alleged drunk driver on Thanksgiving weekend as they returned home from visiting family. Kevin always focused on family. He adored Jenn and the girls, and his educational and career successes were concentrated only on what was best for them. Emily was a bright and talented ray of sunshine with curiosity for science, music, spirituality, and the world around her.

Kevin's wife Jennifer and daughters are surrounded by their immediate and extended families at this most difficult time. The days will be long for many years, and we pray that their memories of Kevin and Emily will remain vivid and that God’s greatest peace and comfort will permeate their home and lives.

Kevin is my cousin and a good friend. All funds will be donated directly to Jenn and the girls to use for college and life expenses. Please donate any amount if you can. If you cannot donate, hold your loved ones close and pray for Jenn, her girls, and Kevin’s family at this time.

Below is the latest update on the fundraising site, posted Sunday:

"Wow, I'm awestruck by the care, concern, and donations for Jenn and the family. I've been contacted by so many of you who want to express your love and support. Coworkers, friends, community members, reporters, and strangers have each been sincere and respectful. This means so much to the family. Thank you.

I originally set it up as a college fund and stated that it was to be used for "college and life expenses." I've heard from so many who don't want to limit Jenn and the girls with the funds -- she will know best what her family needs. College and education funds are at the top of her list, and I changed the title of this fundraising page and updated the content. This remains a memorial fund to honor Kevin and Emily, and all money received will be provided directly to Jenn for her family."