January 9 had been expected to be the first possible date for same-sex weddings due to a four-week waiting period since the landmark law was passed. But the two couples were married in Sydney and Melbourne on Saturday after being granted permission to waive the notice period.

Lauren Price, 31, and Amy Laker, 29, exchanged vows in Sydney because their families had to travel from Wales in the U.K. to attend what was to have been their commitment ceremony. 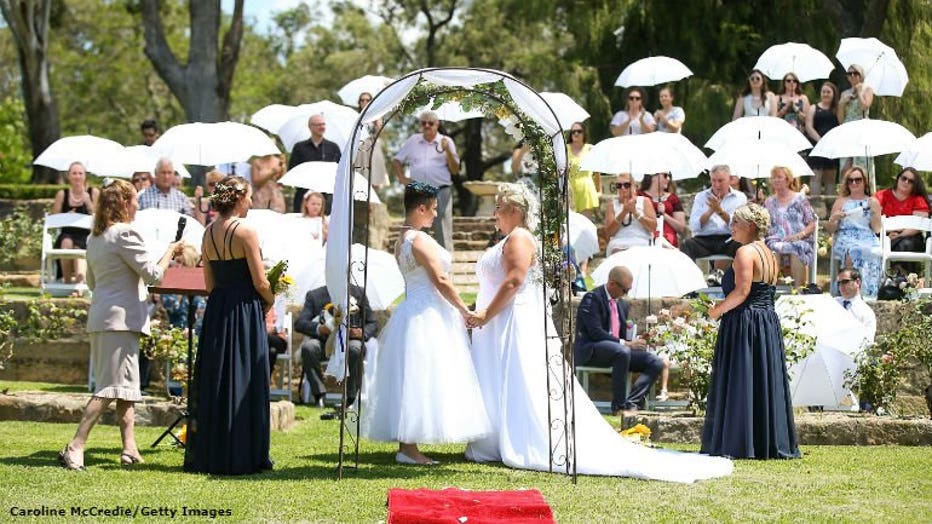 SYDNEY, AUSTRALIA - DECEMBER 16: Same-sex couple Amy Laker and Lauren Price say their vows on December 16, 2017 in Sydney, Australia. Lauren and Amy are the first gay couple to be legally married in Australia, after same-sex marriage was legalised on

Amy and Elise McDonald were given an exemption to marry in Melbourne since their relatives also had flown in from overseas.

West Australian couple Anne Sedgwick and Lyn Hawkins were due to wed on Sunday after being together for 40 years. They were given dispensation as Hawkins, 85, is in the final stages of her battle against ovarian cancer.

"Anne has been very supportive through all this and marrying her, it's Anne's way of saying 'let's finally do this,'" Hawkins told website Perth Now.

On Monday, Cas Willow, 53, and Heather Richards, 56, will marry in Melbourne. Willow is receiving treatment for breast cancer, which has spread to her brain.

The couple, who have been together for 17 years, say marriage will make their last precious few weeks or days together "complete."

"It means our relationship won't just be tolerated, it will be accepted," Richards said.