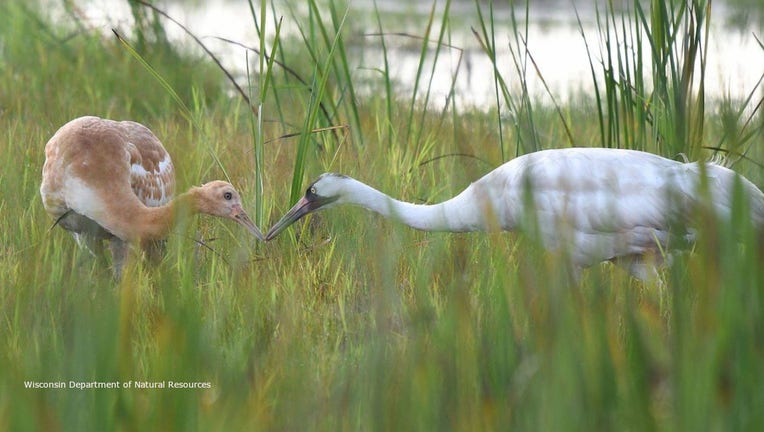 HORICON, Wis. - The first known whooping crane to survive a Wisconsin winter has made history again, officials with the Wisconsin Department of Natural Resources reported, in becoming a mother.

According to a news release posted on the DNR's website, the crane came to Wisconsin in October 2017 after being born in Maryland, raised there by parent cranes. She was released at the Horicon National Wildlife Refuge in Dodge County with the hope she would follow an adult crane and migrate, but that did not happen.

Efforts to capture her and fly her south in an airplane were not successful.

DNR officials noted she became a Facebook favorite as anxious fans tuned in to track her survival.

She would, indeed, survive, and in fall 2018, headed south for the first time to winter in Illinois.

DNR officials say she's returned to Wisconsin every summer since -- pairing up with another crane and building a successful nest at Horicon National Wildlife Refuge in 2020. Their offspring was hatched in mid-May.

The young wild whooping crane marks the first chick to hatch and fledge from Horicon Marsh -- coming three years after its mother survived overwintering during one of the state's coldest and longest winters.

In mid-August, mother, father and their young crane were photographed by pilot Bev Paulan as part of efforts to monitor whooping cranes and their young hatched in the wild.

It's important to note, according to the DNR, whooping cranes are endangered, and there are only 849 in the world.