BEIRUT - Lebanon’s state-run news agency says 16 employees at Beirut’s port have been detained over this weeks explosion that killed more than 100 people and wounded thousands.

The National News Agency quoted Government Commissioner to the Military Court Judge Fadi Akiki as saying on Thursday that 18 people have been questioned so far. All of them are port and customs officials, as well as individuals in charge of maintenance at the hangar where 2,750 tons of explosive materials have been stored for years.

Akiki said that the investigation began shortly after the blast occurred on Tuesday evening and will continue to cover all suspects in the explosion.

Residents of Beirut vented their fury at Lebanon’s leaders Thursday during a visit by French President Emmanuel Macron, blaming them for the deadly explosion that ravaged the capital. Lebanon's customs chief told The Associated Press the Cabinet was warned in the past year that a stockpile of explosive chemicals stored at the port was dangerous.

For many Lebanese, Tuesday’s blast was the last straw after years of corruption and mismanagement by a political elite that has ruled for decades.

The blast, which killed more than 130 people, wounded thousands and left tens of thousands homeless, is believed to have been caused when a fire touched off a stockpile of 2,750 tons of highly explosive ammonium nitrate that authorities left sitting in a warehouse for years — despite a customs official’s repeated warnings. 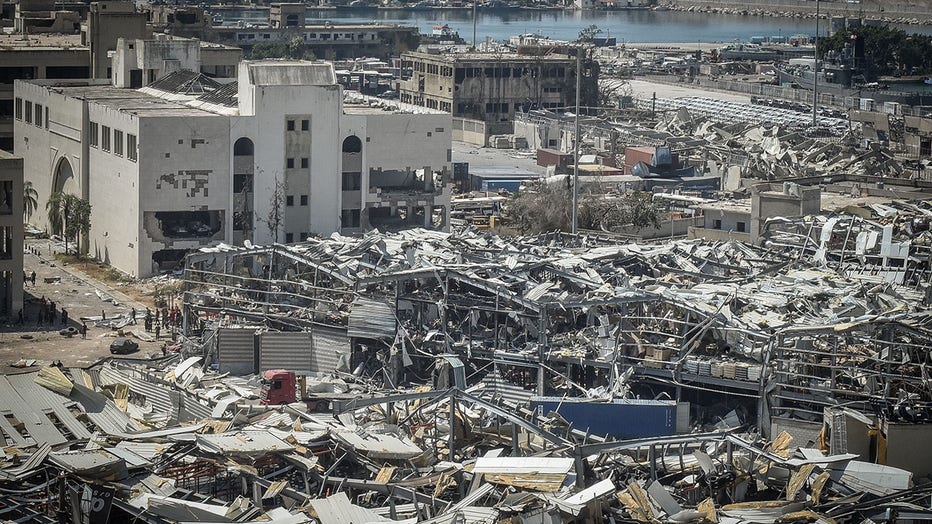 Damaged buildings are seen the day after a massive explosion at the port on August 5, 2020 in Beirut, Lebanon. According to the Lebanese Red Cross, at the moment over 100 people died in the explosion and over 4,000 were injured in explosion at Beirut

Macron announced that France will organize a conference in the next few days with European, American, Middle Eastern and other donors to raise money for food, medicine, housing and other urgent aid.

But he warned Lebanon's political leadership that he wouldn’t give “blank checks to a system that no longer has the trust of its people.” He called on them to create a "new political order.”

He promised a “clear and transparent governance” so that the aid goes directly to the population and aid groups.

In startling scenes, Macron — whose country once was Lebanon’s colonial ruler — presented himself as a champion for the Lebanese to push change on their leadership.

After visiting the devastated port, Macron walked through one of the worst-hit neighborhoods, Gemmayzeh, down a street lined with wrecked buildings. Notably, none of Lebanon’s top politicians have toured residential areas damaged by the blast, though President Michel Aoun and others did visit the port.

On the narrow street, a crowd gathered around Macron and shouted their anger, chanting, “Revolution!” and “The people want to bring down the regime!” — slogans used at mass protests last year. 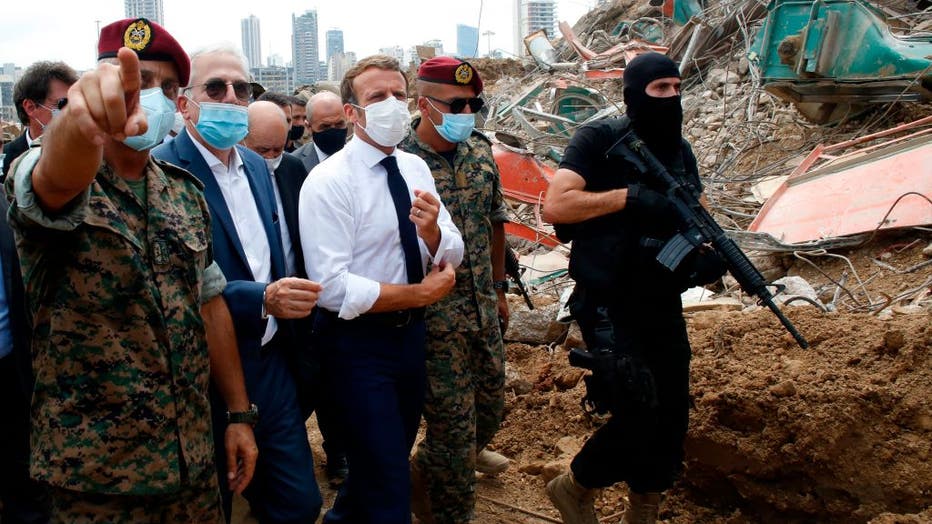 French President Emmanuel Macron (C), surrounded by Lebanese servicemen, visits the devastated site of the explosion at the port of Beirut, on August 6, 2020 two days after a massive explosion devastated the Lebanese capital in a disaster that has sp

Macron told them he would speak to Lebanon’s political leaders.

“I will propose to them a new political pact this afternoon,” he said. “I will be back on the first of September and if they can’t do it, I will keep my responsibility toward you.” He also promised that French aid would be given out with transparency and “will not go into the hands of corruption.”

One woman shouted at Macron, “You are sitting with warlords. They have been manipulating us for the past year.” He replied, “I’m not here to help them. I’m here to help you.” They then hugged.

Hours after Macron left Gemmayzeh, Justice Minister Marie-Claude Najm tried to become the first Lebanese government official to visit the area, only to be driven out by protesters.

“Resign, you criminal! Would you accept anything less if your sister were among those killed?” one protester shouted at her. As she was about to respond, another sprayed her with a water hose. She left as protesters chanted, “Revolution!” and “Resign.”

Later, Macron met with Aoun and the prime minister and held a gathering with the head of the main parliament blocs. 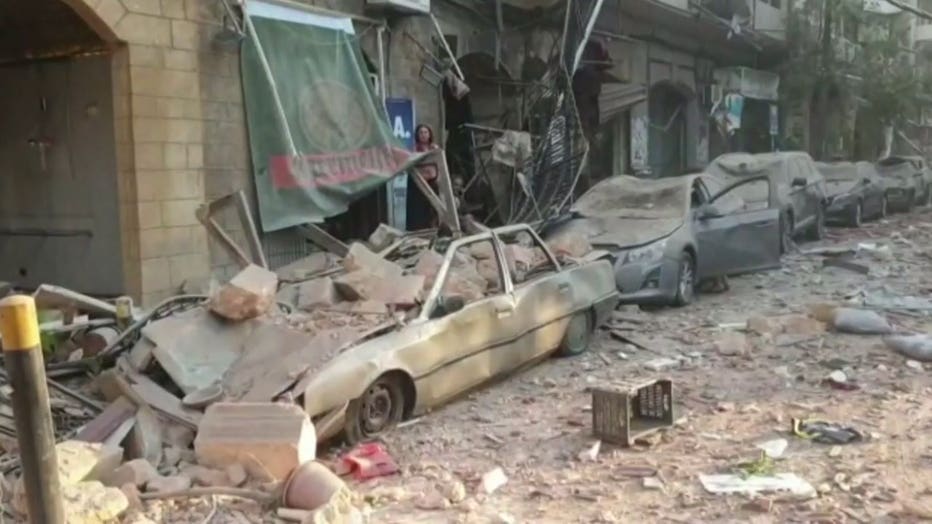 Damage in Beirut, Lebanon following an explosion on Aug. 4

There have been widespread pledges of international aid to Lebanon, which was already mired in a severe economic crisis that has crippled its ability to rebuild from the blast. However, the international community has been reluctant to offer support to the notoriously corrupt and dysfunctional government.

Lebanon’s various factions, including the Iran-backed Hezbollah militant group, have ruled the country since the 1975-1990 civil war. Almost all the country’s public institutions are divided up among the factions, which use them as patronage generators for themselves and their supporters. Little actual development is put into the institutions and anything that requires joint action often becomes mired in bickering. As a result, even basic services like electricity and trash collection are a shambles.

Losses from the blast were estimated by Beirut Gov. Marwan Abboud to be between $10 billion to $15 billion. He also said nearly 300,000 people are homeless.

The disaster may also have accelerated the country’s coronavirus outbreak, as thousands flooded into hospitals. Tens of thousands have had to move in with relatives and friends after their homes were damaged, further raising the risks of exposure. Lebanon on Thursday reported 255 new infections, bringing the total to 5,672 cases, including 70 deaths.

The head of Lebanon’s customs department, Badri Daher, told the AP that State Security, one of Lebanon’s main security agencies, had been conducting an investigation the past year into the stockpile of ammonium nitrate that had been stored at the port since it was confiscated from an impounded ship in 2013.

During the investigation, the agency sent reports to the Cabinet, state prosecutor and other state institutions about the danger of the material.

Security officials were not immediately available for comment. But if correct, it would be the first evidence that top level officials were notified of the presence of the large amount of ammonium nitrate — a component of fertilizers that is highly explosive — kept so close to residential areas.

Daher confirmed that he had sent a letter in 2017 to a judge warning of the danger and asking for guidance on what to do with the material. He said he and his predecessor sent six letters but never got a response.

'There is nothing left:' Milwaukee woman with ties to Beirut shares details of devastating explosion

One Milwaukee woman who works remotely for a Beirut television network spoke to FOX6 News about the devastation in the city following an explosion on Aug. 4.

President Trump: Massive explosion in Beirut was likely an 'attack'