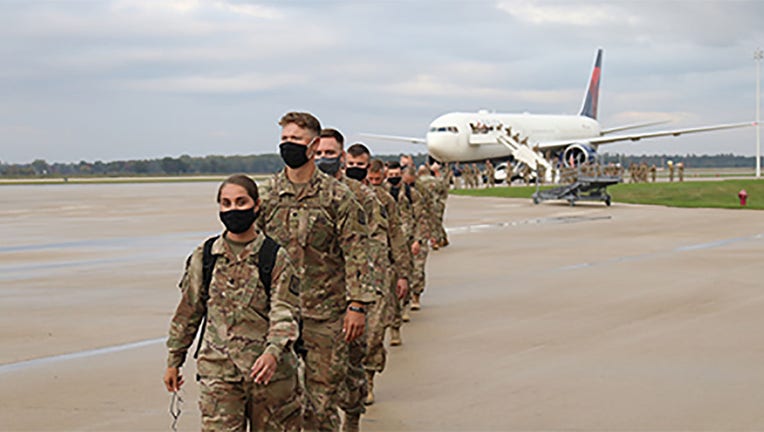 The soldiers returned from a nearly 12-month deployment supporting an Indiana National Guard engineer battalion in Afghanistan and the Middle East.

“We haven’t seen this much green in an entire year,” one Soldier called out to another as they walked from the commercial airliner which brought them to Volk Field, Wisconsin to an awaiting hangar for their welcome home ceremony.

“It’s a lot of green,” the other Soldier agreed.

They served at 21 bases spread across seven countries, ranging from Afghanistan and Iraq to Syria, Jordan, Saudi Arabia, and Kuwait. There they improved existing facilities, completed construction projects for others, or deconstructed facilities no longer needed for the mission. 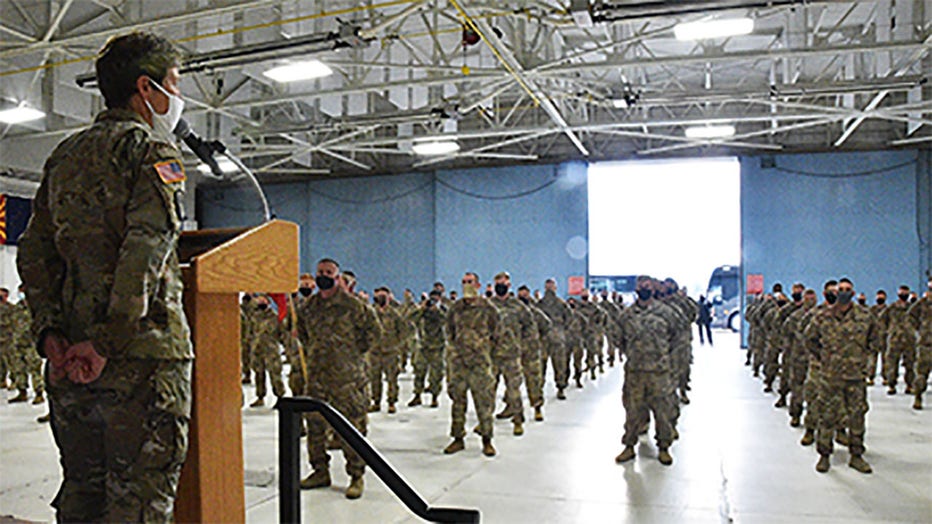 The COVID-19 pandemic affected their mission, restricting personnel and equipment even as they helped build a COVID hospital in Afghanistan.

Capt. Joseph Tadisch, 829th Engineer Company commander, kept his remarks brief but made sure to thank his Soldiers for their efforts over the past year.

“Everyone’s positive attitude and dedication helped make this experience great,” Tadisch said. “If we look back at all the things we accomplished and endured, we should be proud. We’ve always left the foxhole better than we received it, and I thank you for that.”

“We are grateful for folks like you who answer the call time and time again to go overseas and support our nation’s affairs,” Evers said. “You’ve accomplished much, represented Wisconsin well, and conducted yourselves with honor and professionalism during this unique and challenging mission.”

“I couldn’t be prouder of the job you did overseas, and it’s great to have you back in the state of Wisconsin,” Conde said.

Brig. Gen. Joane Mathews, Wisconsin’s deputy adjutant general for Army, told the returning unit she imagined what they were thinking when their plane landed at Volk Field — the desire to be home.

“I want you, when you get home to give your sons, your daughters, your husbands, your wives, your family members a huge hug, and give them one for me,” Mathews said, “because I want to thank them so much for supporting you while you were deployed.”

Staff Sgt. Kalyn Collins, a truck driver and squad leader with the 829th, reunited with his wife at the Wisconsin Army National Guard armory in Mauston after the ceremony. He also met his seven-month-old daughter for the first time.

“I don’t know how to really describe it in worlds, I suppose,” Collins said, noting that after his first deployment he came home and celebrated with family and friends. “But this time I come home and I have a daughter.”

“It feels so good to have him home,” his wife Sarah said. “I’m just so excited to see him as a father.”

Video chats helped them stay in touch during the deployment.

“I think that’s what really helped a lot,” Collins said. “It was really a godsend, I guess, having the technology to see her.”

At the armory in Spooner, Wisconsin, Jaclyn Feicke waited to reunite with her husband, Sgt. 1st Class Anthony Fiecke, a platoon sergeant.

“He’s been gone for about a year and a half, so it’s going to be strange having him back,” Jaclyn said, “but [I’m] very excited. It’s about time.”

The homecoming coincided with their son Sven’s third birthday.