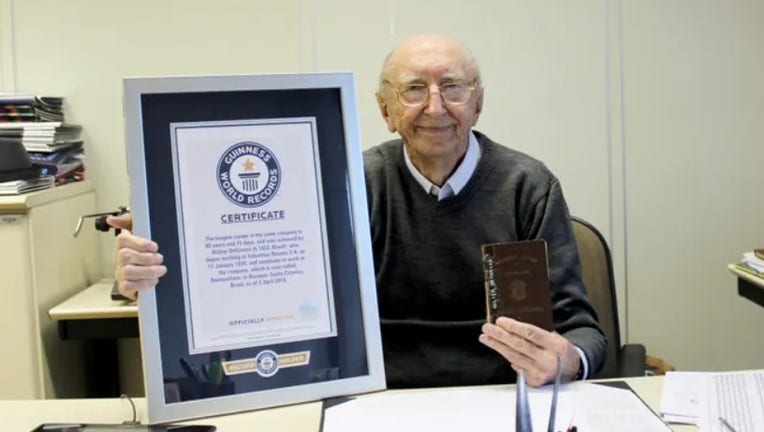 A Brazilian man has broken the Guinness World Record for working at the same company for 84 years and 9 days.

100-year-old Walter Orthmann's accomplishment was verified by GWR on Jan. 6, according to the organization.

GWR said Orthmann started working for ReneauxView, a textile company, as a shipping assistant when he was 15 years old on Jan. 17, 1938.

Orthmann was born in Brusque, a small town in Santa Catarina, home to a large German population. GWR said he would walk to school barefooted and was described as "an exceptional student with a brilliant memory and attention to detail."

However, he then began to look for work due to financial problems at home. He applied for a job at ReneauxView, which was then called Renaux S.A., and was hired because he was proficient in German.

He was then promoted to a sales position and then became a sales manager.

"Walter believes that the best part about having a job is that it gives you a sense of purpose, commitment and a routine.," GWR said in an article.

Orthmann turned 100 years old on April 19 and celebrated his birthday with the company, family, and friends.

He's described as being in good health with excellent mental clarity and memory. GWR said he enjoyed a calm life and exercises everyday. He also commutes to the office.

"I don’t do much planning, nor care much about tomorrow," he said in a news release. "All I care about is that tomorrow will be another day in which I will wake up, get up, exercise and go to work; you need to get busy with the present, not the past or the future. Here and now is what counts. So, let’s go to work!"