MILWAUKEE - March marks the beginning of severe weather season for Wisconsin. Historically June is Wisconsin's most active month when it comes to tornadoes. But the threat begins to ramp up in early spring.

As a state, Wisconsin averages 23 tornadoes per year. But between 1844-2014, February is the only month without a recorded tornado incident, according to the National Weather Service. So what county in southeast Wisconsin is historically the safest from tornadoes?

When looking at tornado track data between 1950-2017 from The Midwestern Regional Climate Center (MRCC), it shows a unique pattern that makes southeast Wisconsin's tornado potential so interesting. There has been almost no strong to severe tornadoes that have reached Lake Michigan other than 1974 twister through Sheboygan County. We have had tornadoes reach incredible strengths like the EF5 in 1996 near Fond du Lac, which is as strong as anything that can happen in the Great Plains. But then there's a dramatic cut-off near the lake. 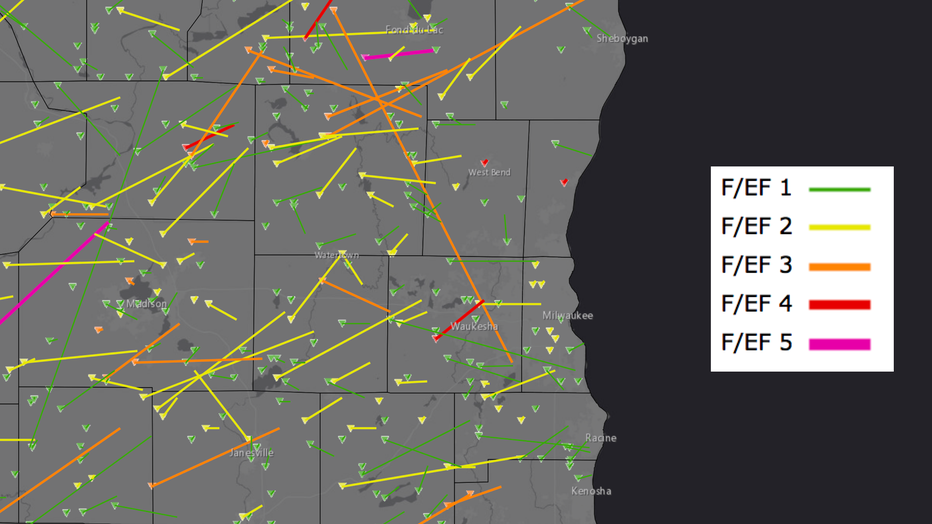 Tornado tracks from 1950-2017 color-coded depending on maximum wind speed. EF1 being least to EF5 being the greatest wind speed.

Almost every county along the lake lacks any historical long-tracking tornadoes especially Ozaukee County. Counting EF-0 tornadoes, Ozaukee County has only had four tornadoes between 1950-2017 -- but only one EF-1 and an impressive EF-4 in 1964.

It is important to note the Enhanced Fujita Scale was introduced in 2007 with slightly different parameters to the Fujita Scale that began in 1971. While it could simply just be chance when comparing every county in southeast Wisconsin, Ozaukee County is the safest county to be in in terms of tornado potential. 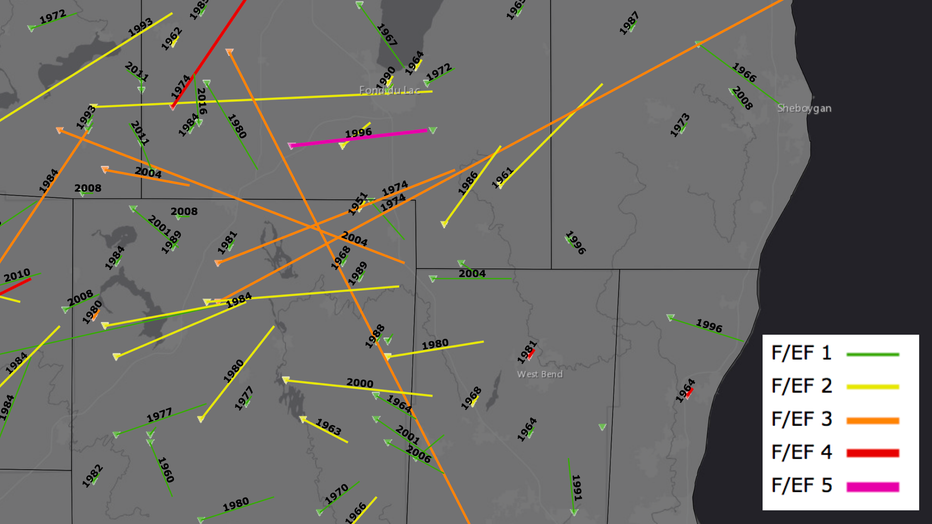 But why is this? Your first guess might be Lake Michigan itself and you're absolutely right. In the spring and early summer, the lake's waters are generally much cooler than the surrounding air temperature. This keeps nearby communities noticeably cooler from inland locations. While cold fronts will still spark up thunderstorms, the decrease in atmospheric stability caused by the cooler lake air is likely the main reason tornadoes fall apart before getting much farther east. While more research and data would need to be analyzed to come up with any definitive reason, it is an interesting weather phenomenon that helps keeps parts of southeast Wisconsin safer from tornadoes than other areas in the state.

Another interesting tidbit is between 1950-2017 there have been no deaths caused by tornadoes in Ozaukee, Milwaukee, Kenosha, and Racine counties. It is another statistic we can likely thank Lake Michigan for.

Gov. Tony Evers signed off Wednesday, March 24 on the Ho-Chunk Nation’s plans to open a casino and entertainment complex in Beloit.