MILWAUKEE — Heavy rain and fierce winds downed trees, damaged buildings and left tens of thousands of people without power in Wisconsin on Saturday as a heat warning remained in effect for parts of the state.

Two injuries were reported in Trempealeau County. And We Energies said it could be days before power is restored to about 70,000 customers in the Green Bay region.

"I was so scared, I really thought I was going to die," Lisa Gast told WLUK-TV. Gast, of Mountain, was driving through Friday's storm on her way home from work. "I wanted to get home to my family."

Lionel Longsine of Mountain was more concerned about getting a generator for his wife, who was released from the hospital days ago and can't breathe on her own without power.

"She's got cancer in her right lung," he told WLUK. Trees in the roadway made him feel stuck. "We're trapped in our town and we can't get out."

The National Weather Service said Friday's storm produced at least one tornado. Warning coordination meteorologist Jeff Last told The Associated Press that an EF1 tornado touched down in Marathon County at about 8:30 p.m. on Friday, demolishing a barn and damaging a couple hundred trees.

The same storm produced straight-line winds in Marinette and Langlade counties and Last said the National Weather Service has received reports of possibly thousands of trees down in heavily forested northeastern Wisconsin.

Storm survey teams were working to confirm whether other storm damage may have been caused by tornados, Last said. There were no additional confirmed tornados at midday Saturday.

The U.S. Forest Service said portions of the Lakewood-Laona Ranger District on the Chequamegon-Nicolet National Forest were damaged. Several camping areas and trails were closed due to down trees and impassable roads.

As of Saturday afternoon, about 140,000 Wisconsin customers were without power, according to information compiled from multiple utility companies. We Energies' website shows more than 70,000 customers were affected in the Green Bay area.

We Energies said the storms caused so much damage that it will have to rebuild part of its network, and customers in that area could be without power for days.

The power outages also affected about 6,000 We Energy customers in southeastern Wisconsin, including the Milwaukee area, which was under an excessive heat warning until Saturday night.

The cities of Milwaukee and Waukesha posted a list of cooling sites online, where residents could go to stay safe in the intense heat.

Meanwhile, other residents were cleaning up after Friday's storms snapped trees in half. 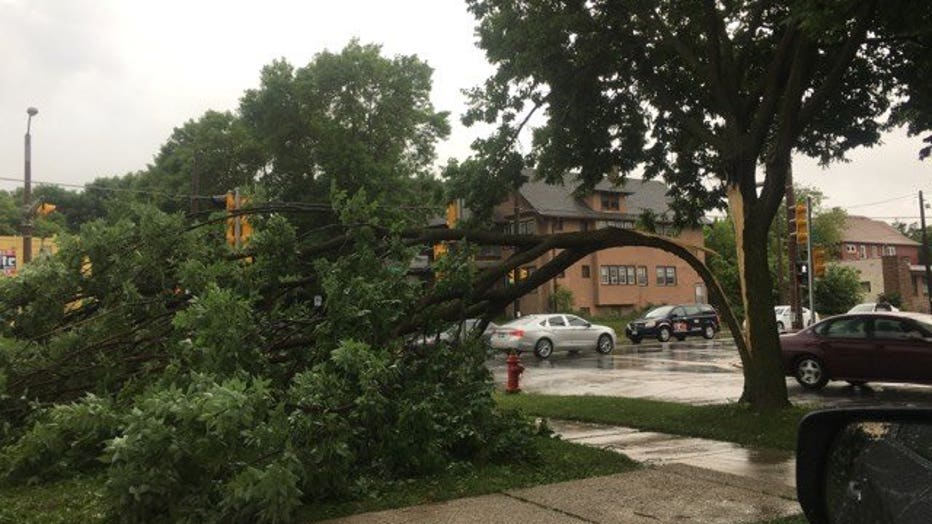 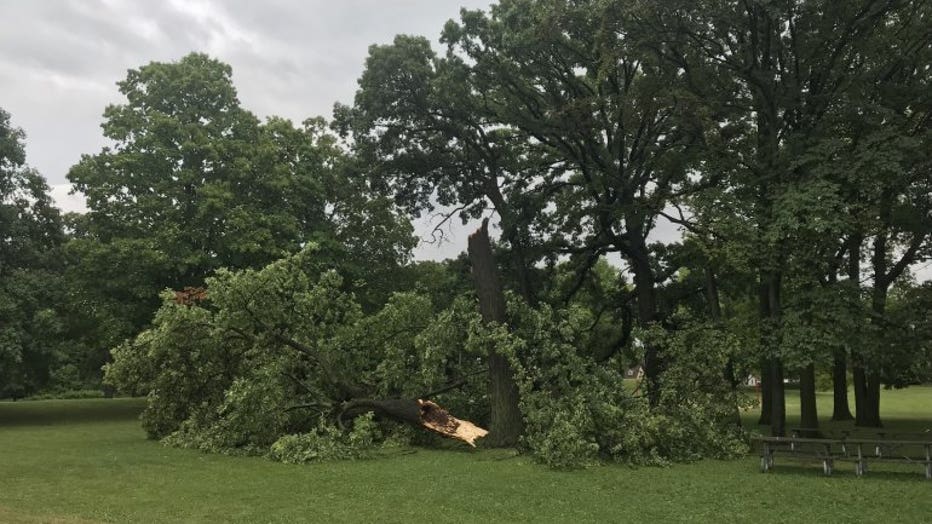 Tree down at McGovern Park 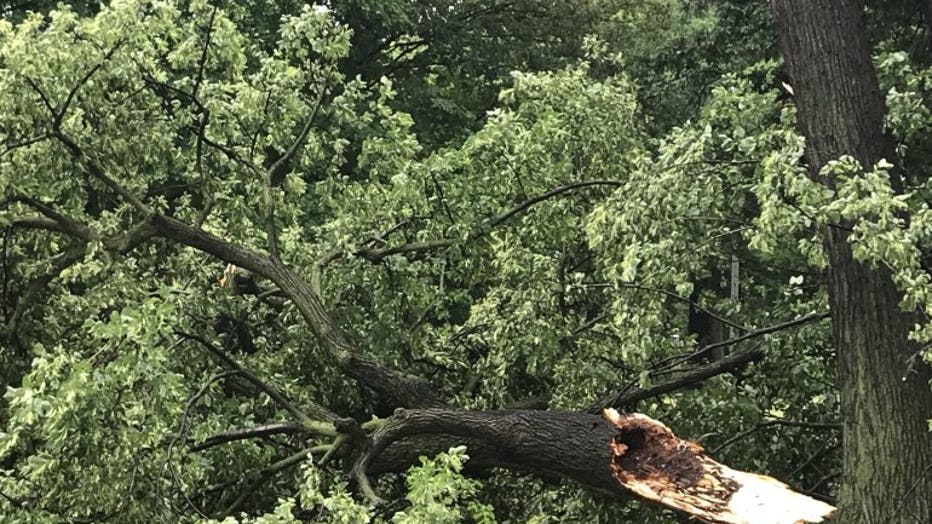 Tree down at McGovern Park

Mike Kapocius told the AP he was at his lake home in Elcho, about 100 miles (160.93 kilometers) north of Appleton, on Friday when winds began to pick up and "we were seeing the trees move in directions they've never moved before." After a tree limb hit his patio door, his group took cover downstairs.

They emerged to see what Kapocius described as widespread devastation. Multiple trees had been snapped and roads were impassable. On Saturday, he and a group of guys used chain saws to clear the roads enough so emergency vehicles could get through. 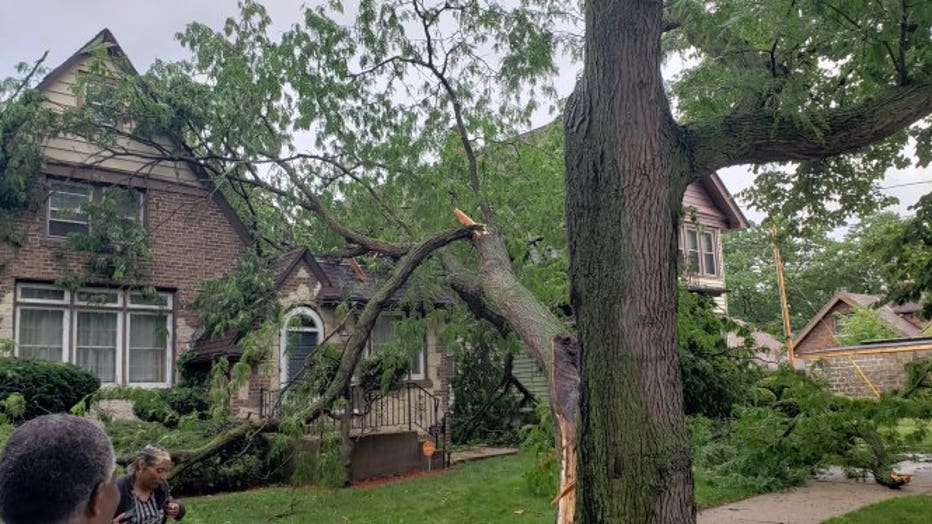 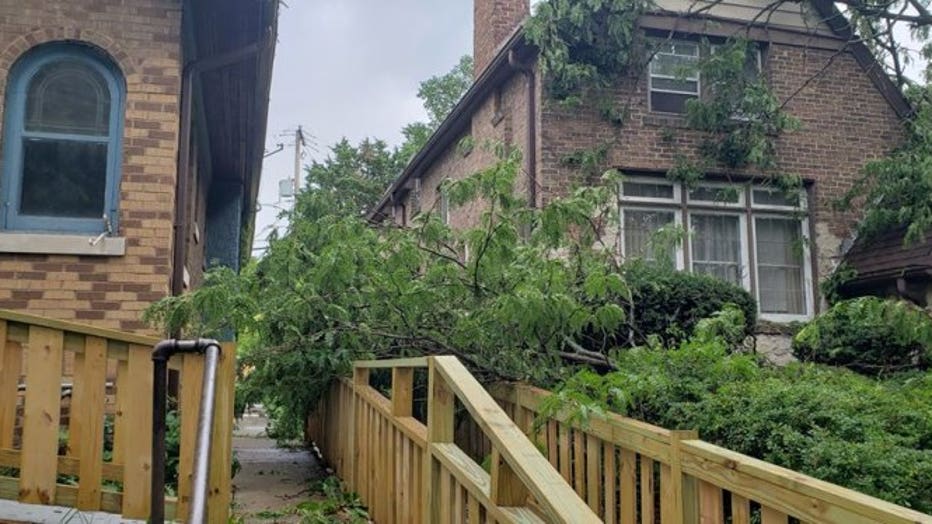 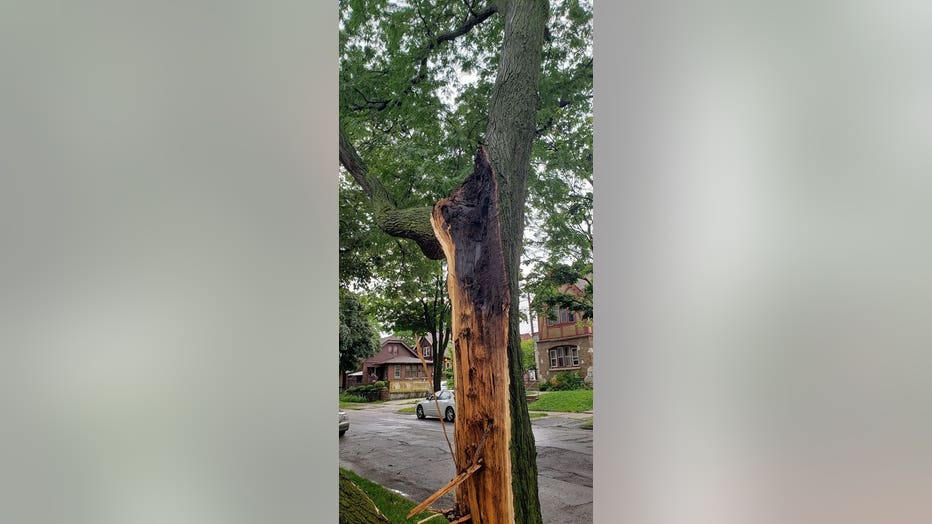 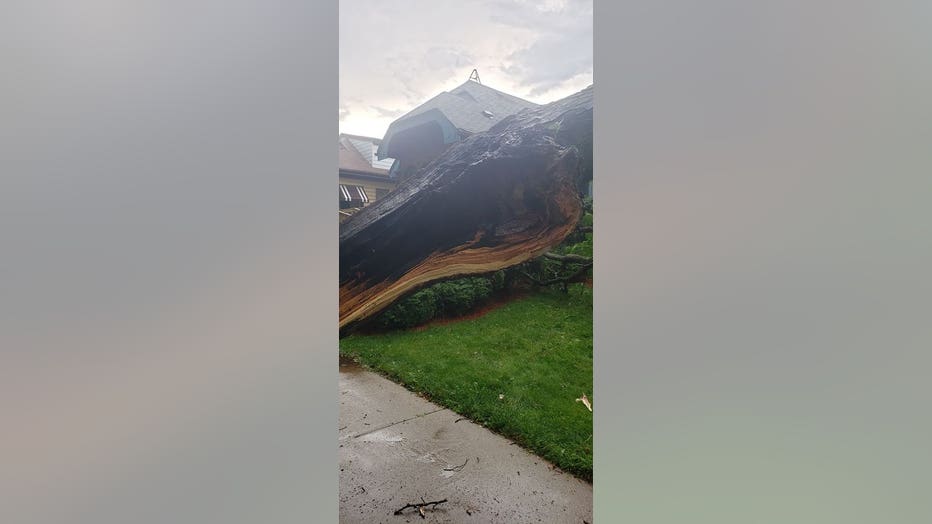 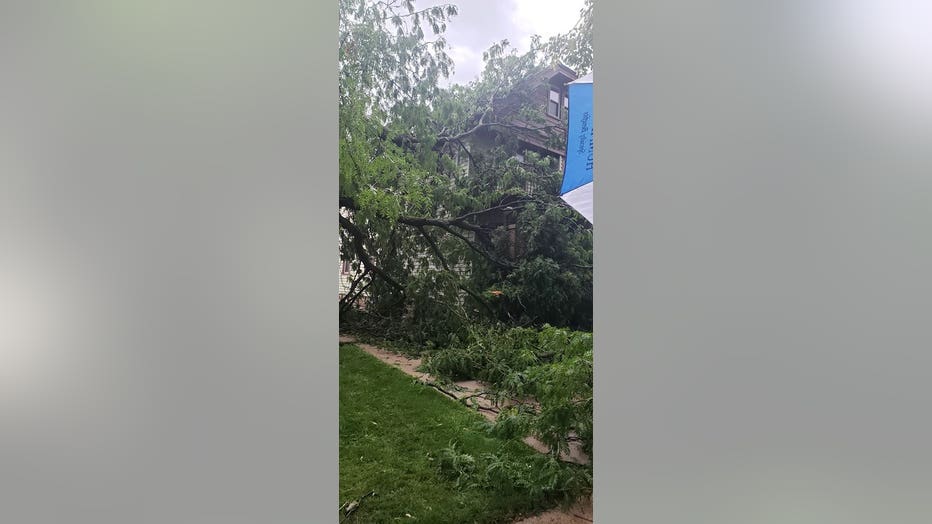 "The devastation is just brutal," he said.

The Trempealeau County Sheriff's Office said the county fair was evacuated twice due to Saturday's storms.

Two injuries were reported in the county: One woman in Galesville was cut by flying glass when a window blew in, and a man in the town of Gale was hit by a tree that fell into a camper.

The sheriff's office said a fatal crash on Friday also may have been due to the weather, but that is still being investigated. And WSAW-TV reported that fire officials in Wausau are investigating whether a lightning strike caused a mobile home fire that left one man dead.