March snowfall is nothing uncommon, even snow in April happens from time to time but what isn't common is the lower totals we've been getting.

Going back to 2013 we've had it pretty easy when it comes to March snowfall for the last five years. Before Thursday morning, March 31, we had only seen 2.5" for the entire month. And we just added 1"-2" on top of that but on average Milwaukee receives 6.6" during the entire month of March, so once again we've come short. 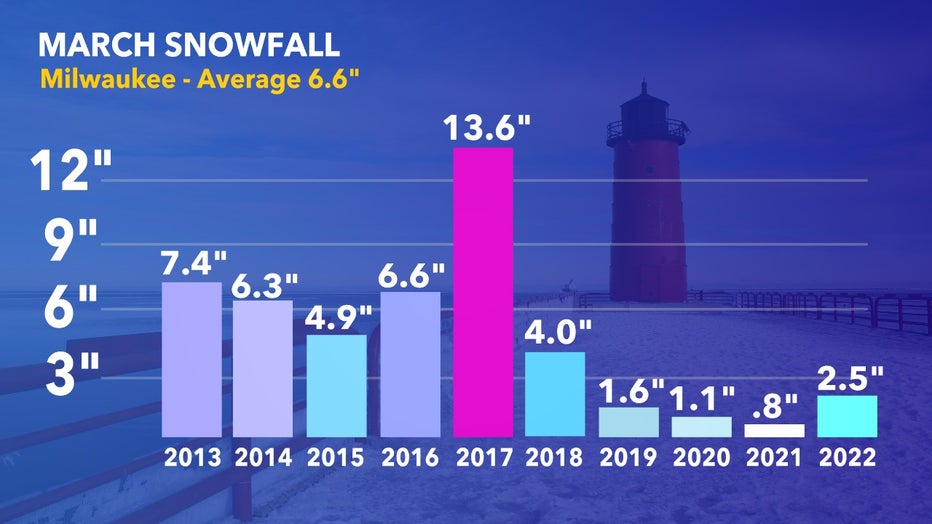 March snowfall by year going back to 2013

In just a ten-year window you can see how sporadic snowfall can be for the first month of meteorological spring. 2017 takes the cake as the most extreme, however, it's nowhere near our record. In March 1881, Milwaukee received 52.6" of snowfall, that's more than what we typically see in an entire year!

To put it simply we've had it easy when it comes to snow in March. Thursday, March 31 snow is an inconvenience, but it's not all a negative.

March snowfall is typically followed by quick melting that soaks deep into the soil This extra boost of moisture will continue to help our drought situation.

Snow tapers off in SE Wisconsin