The latest round of damaging weather in the central U.S. came a day after violent storms killed one person and injured at least 130 in Indiana and Ohio.

Mark Duffin, 48, learned from his wife and a television report that the large tornado was headed toward his home in Linwood, Kansas, about 30 miles (48 kilometers) west of Kansas City. 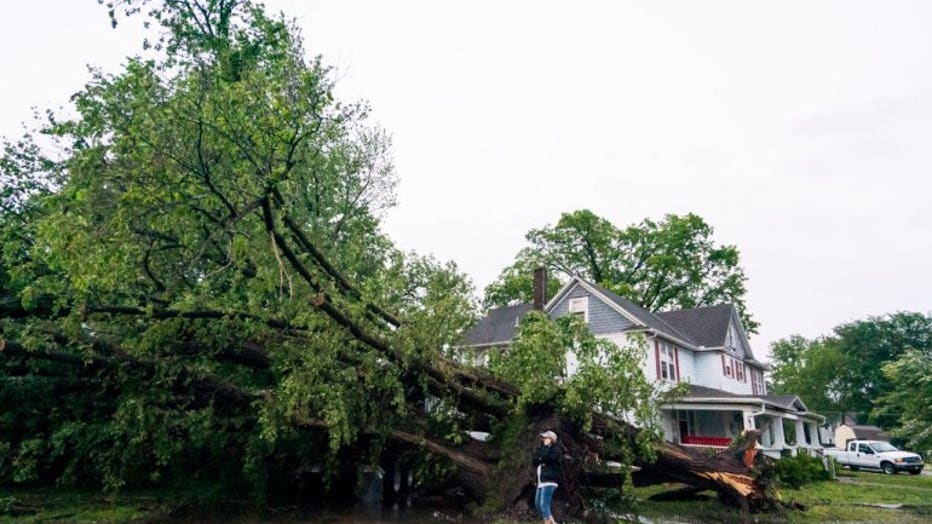 LINWOOD, KS - MAY 28: A tornado toppled a tree onto a semi truck on May 28, 2019 in Linwood, Kansas. The Midwest has seen extensive severe weather this spring with widespread flooding and multiple tornadoes. (Photo by Kyle Rivas/Getty Images)

The next thing he knew, the walls of his house were coming down.

Duffin told the Kansas City Star that he grabbed a mattress, followed his 13-year-old to the basement and protected the two of them with the mattress as the home crashed down around them. 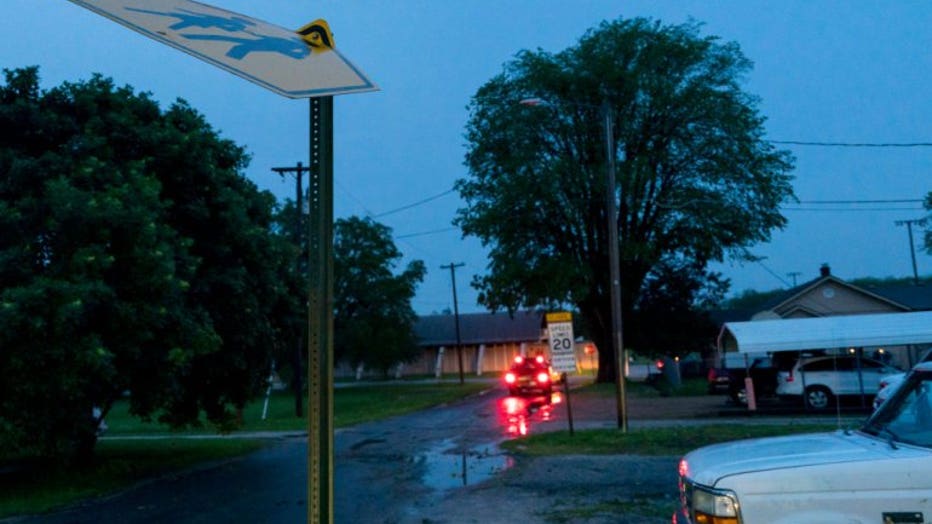 LINWOOD, KS - MAY 28: Trees and signs were damaged after a tornado struck the city of Linwood on May 28, 2019 in Linwood, Kansas. The Midwest has seen extensive severe weather this spring with widespread flooding and multiple tornadoes. (Photo by Kyl

At least a dozen people were admitted to the hospital in Lawrence, 40 miles (64 kilometers) west of downtown Kansas City, Missouri, and home to the University of Kansas, hospital spokesman Janice Early said. Damage also was reported in the towns of Bonner Springs and Pleasant Grove.

But the Kansas City metropolitan area of about 2.1 million people appeared to have been spared the direct hit that was feared earlier in the evening when the weather service announced a tornado emergency.

The storms in Kansas City Tuesday were the 12th straight day that at least eight tornadoes were reported to the National Weather Service. The last such stretch was in 1980. The weather service website showed at least 27 reports of tornadoes on Tuesday, most in Kansas and Missouri but also in Pennsylvania and Illinois. 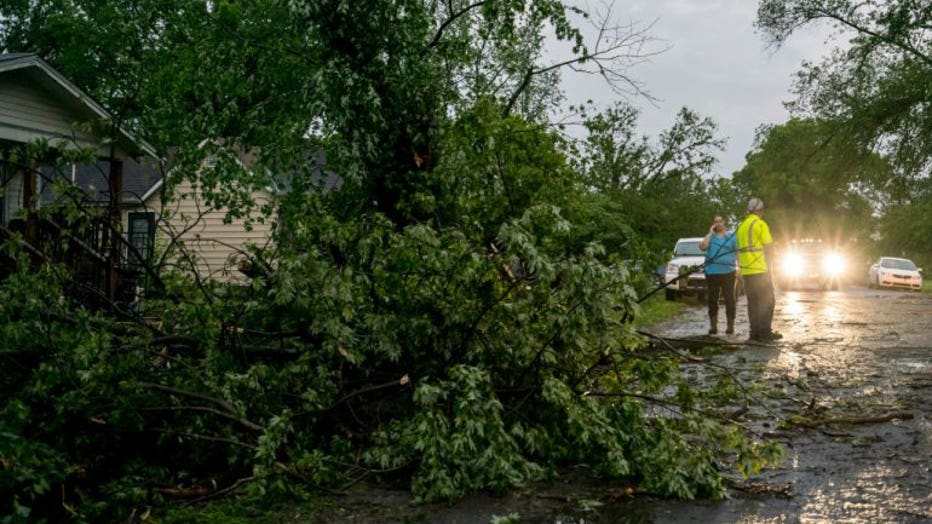 LINWOOD, KS - MAY 28: Citizens of Linwood assess the damage from a tornado on May 28, 2019 in Linwood, Kansas. The Midwest has seen extensive severe weather this spring with widespread flooding and multiple tornadoes. (Photo by Kyle Rivas/Getty Image

After several quiet years, the past couple of weeks have seen an explosion of tornado activity with no end to the pattern in sight.

Tornadoes also were confirmed in eastern Pennsylvania and the National Weather Service issued a tornado warning for parts of New York City and northern New Jersey.

The winds peeled away roofs — leaving homes looking like giant dollhouses — knocked houses off their foundations, toppled trees, brought down power lines and churned up so much debris that it was visible on radar. Highway crews had to use snowplows to clear an Ohio interstate.

Some of the heaviest damage was reported just outside Dayton, Ohio.

"I just got down on all fours and covered my head with my hands," said Francis Dutmers, who with his wife headed for the basement of their home in Vandalia, about 10 miles (16 kilometers) outside Dayton, when the storm hit with a "very loud roar" Monday night. The winds blew out windows around his house, filled rooms with debris and took down most of his trees.

Tornadic winds weren't the only problem. Several water rescues were reported in northern Missouri. In sparsely populated Putnam County, officials urged everyone to stay off roads because flooding was rampant after the county got 2 inches of rain in 20 minutes Tuesday night.

Hannibal, Missouri, officials were just beginning to assess damage Wednesday, hours after torrential rain proved too much for the storm sewers, causing a break that resulted in water damage to buildings in the historic downtown area.

The rain is expected to cause yet another spike in river levels. The Mississippi River already is approaching all-time records at several Missouri and Illinois communities.

Outbreaks of 50 or more tornadoes are not uncommon, having happened 63 times in U.S. history, with three instances of more than 100 twisters, said Patrick Marsh, warning coordination meteorologist for the federal Storm Prediction Center. But Monday's swarm was unusual because it happened over a particularly wide geographic area and came amid an especially active stretch, he said.

As for why it's happening, Marsh said high pressure over the Southeast and an unusually cold trough over the Rockies are forcing warm, moist air into the central U.S., triggering repeated severe thunderstorms and tornadoes. And neither system is showing signs of moving, he said.

Scientists say climate change is responsible for more intense and more frequent extreme weather such as storms, droughts, floods and fires, but without extensive study they cannot directly link a single weather event to the changing climate.