MILWAUKEE -- Probably, at some point in your life, you've seen a weather map similar to the picture below. It has red Ls and blue Hs all over the place, representing low and high pressure. Looking deeper into how pressure shapes our weather, you'll find it's the whole reason we get wind in the first place. 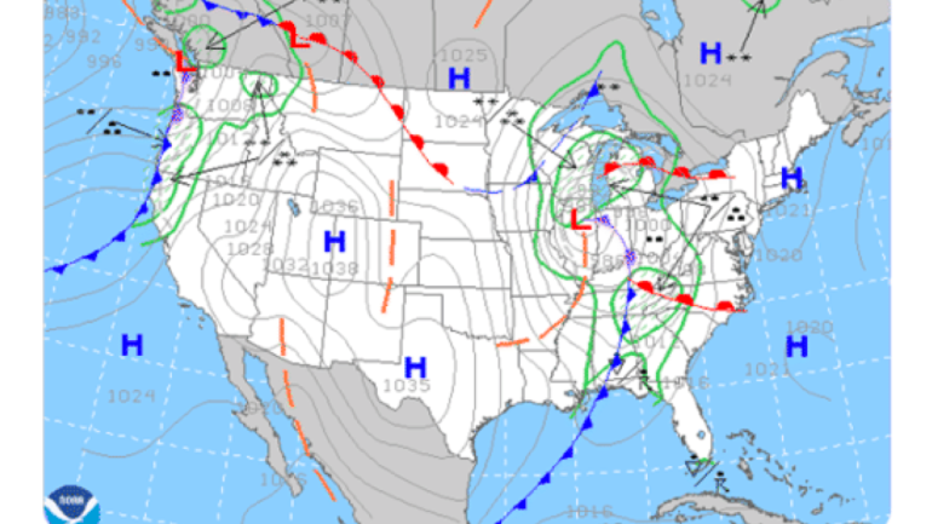 If you take a balloon at the center of high pressure and release it, of course, it'll go up if it's filled with helium, but also it will head towards the low. Air moves from high to low pressure. It's the path of least resistance, and acts as a force on the balloon. This force is called the Pressure Gradient Force. 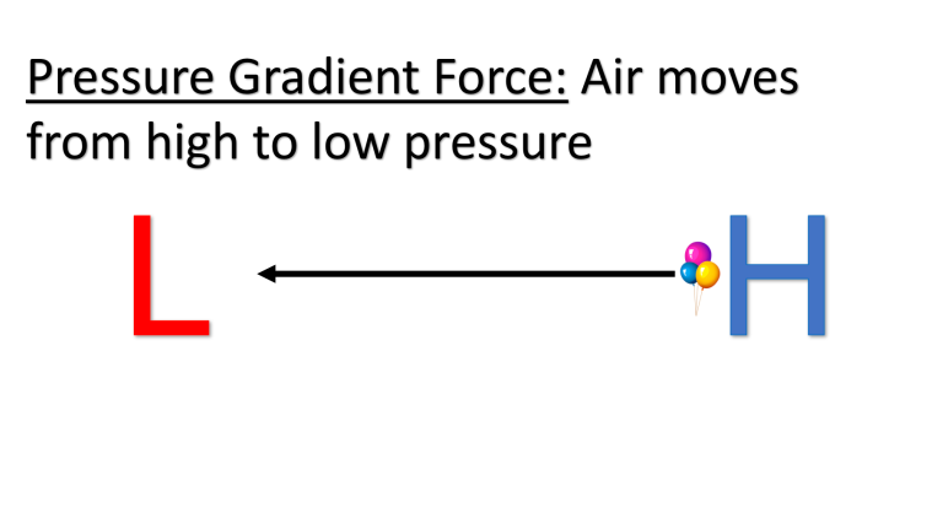 If the Pressure Gradient Force was the only thing, the balloon would go right to the low, but it doesn't. That's due to two more very important factors. 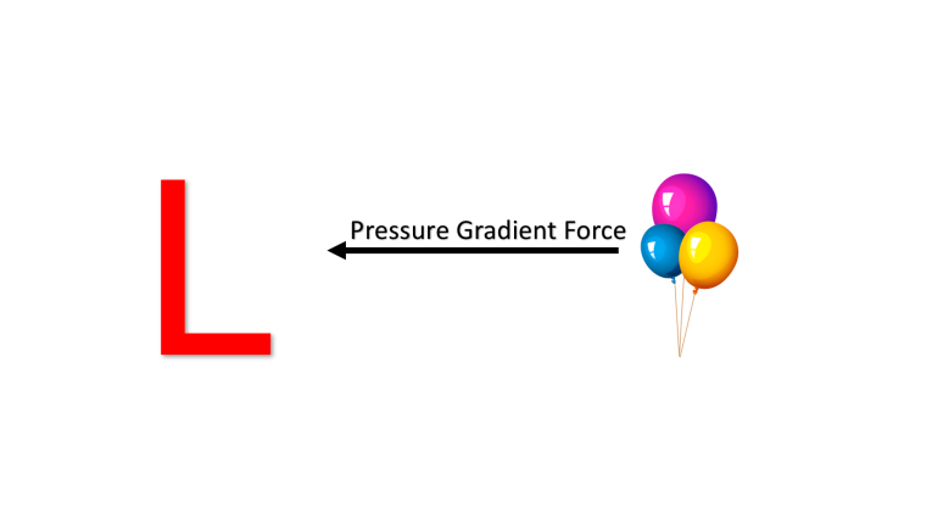 The Coriolis Force acts on all objects not solidly attached to the Earth over long distances. Air and water are impacted by this over hundreds of miles. It is a myth this is why your toilet rotates differently, depending on what hemisphere you're in. The Coriolis Force is caused because of Earth's rotation, and makes objects over long distances shift to the right of their motion in the northern hemisphere. 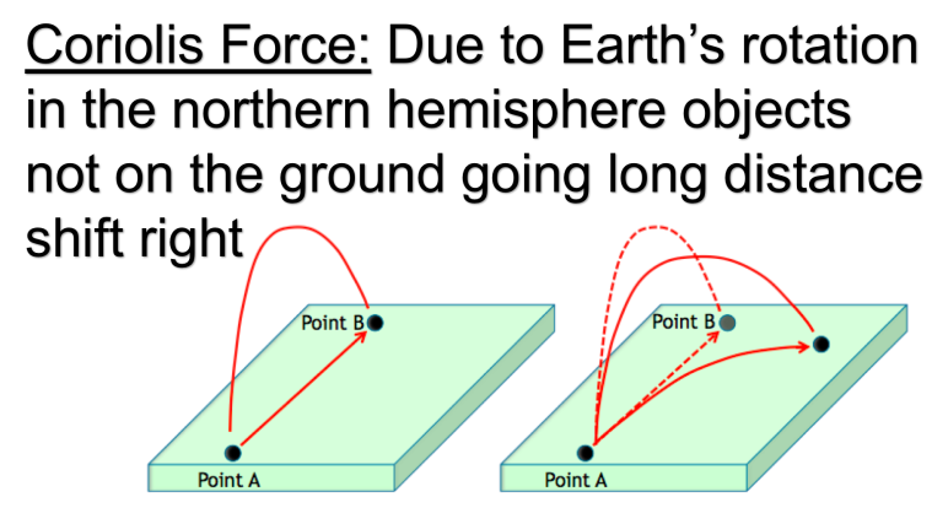 Adding the Coriolis Force to the Pressure Gradient Force, you now have the balloon having one force no longer acting straight into the low, but there is one more factor to consider. 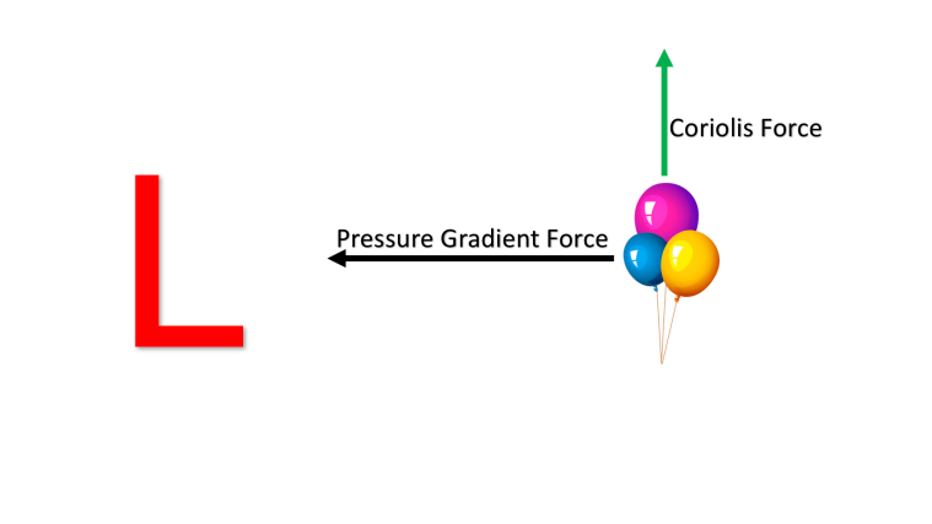 Pressure Gradient Force and Coriolis Force demonstrated on the balloon

Friction impacts all moving things on Earth -- your tires, your shoes, even running water all experiences a force in the opposite direction of its motion. Air is no different. Friction acts in the opposite direction of the Pressure Gradient Force. Closer to the ground, air has obstacles to overcome, which slows it down. High up in the atmosphere, there are no objects, thus, wind speeds higher in the air are much faster. 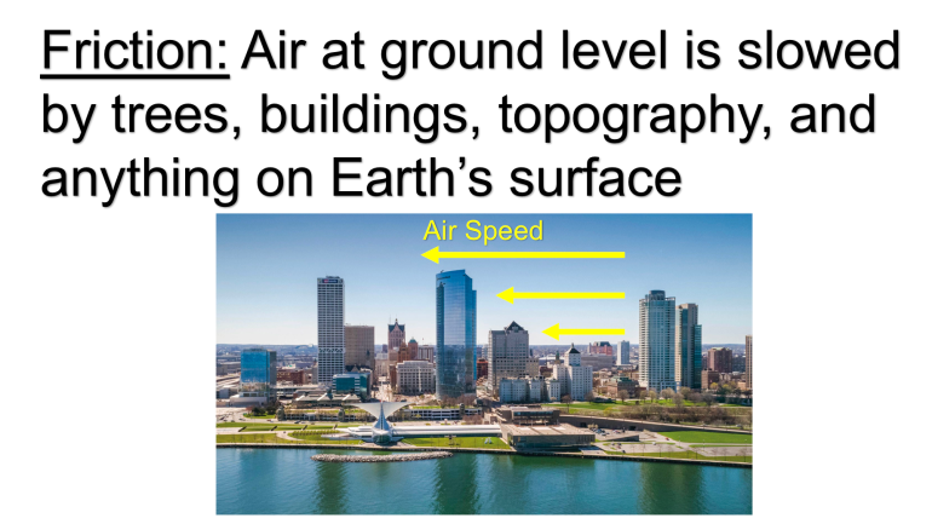 Now, we have three different forces acting on the balloon. Pressure Gradient Force, Coriolis Force and friction all act on the balloon at the same time. Pressure still wins out, but the other forces cause the balloon movement to veer to the right. 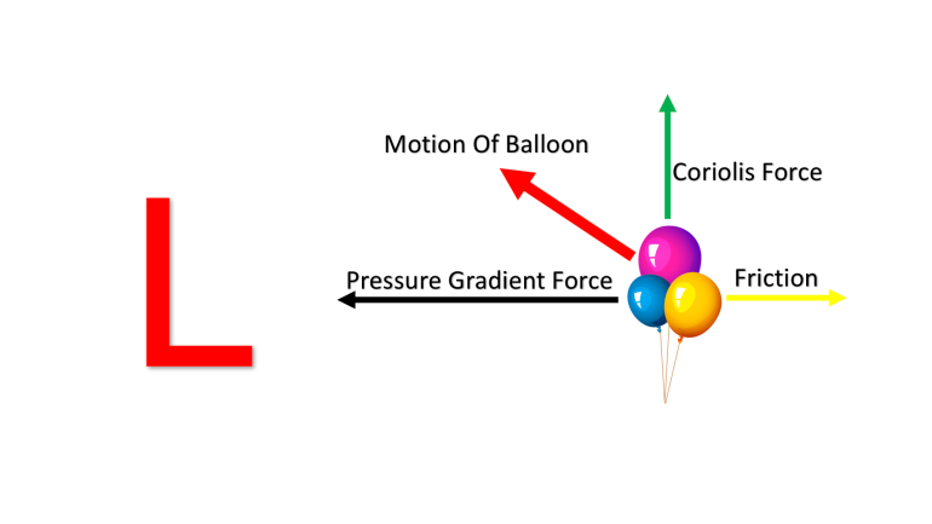 Balloon motion now that we take all three forces into account

If you imagine three balloons surrounding the low and did the same experiment, you'd get a counter-clockwise motion of the balloons. That's exactly how air moves around a low, like a giant toilet bowl! 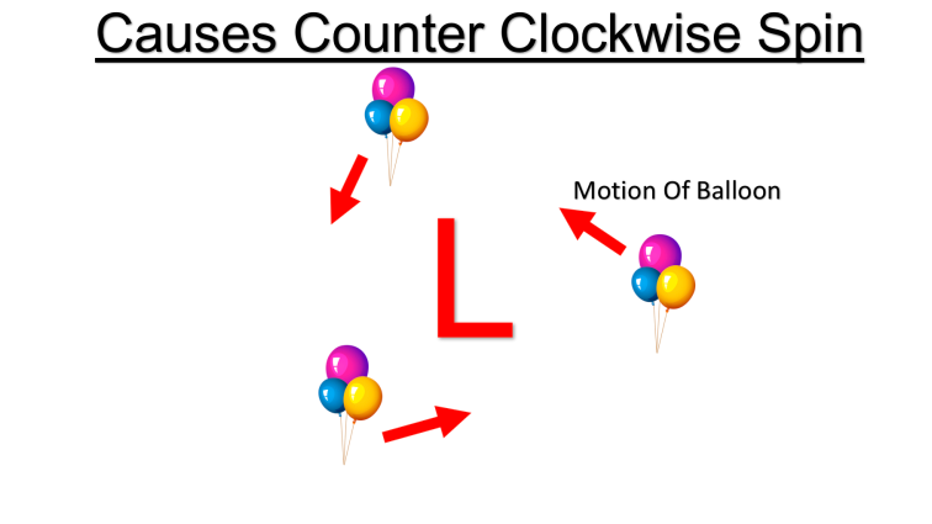 On our weather maps, you'll see the general motion of rain and wind around a low following this counter-clockwise pattern.  Generally speaking, warm air is drawn up from the south on the right side of the low, while colder air is drawn down from the north on the backside of the low. This is the reason we get warm and cold fronts! 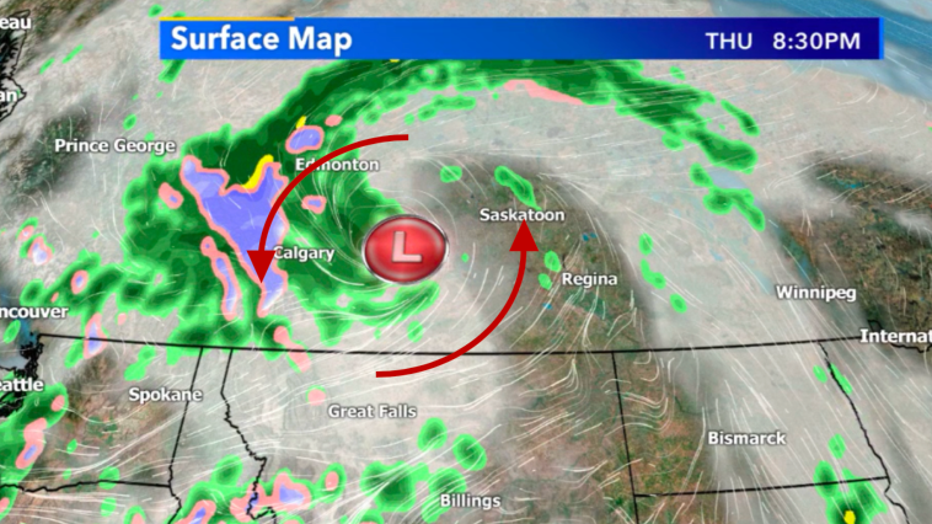 Counterclockwise rotation of air around a low on a surface map 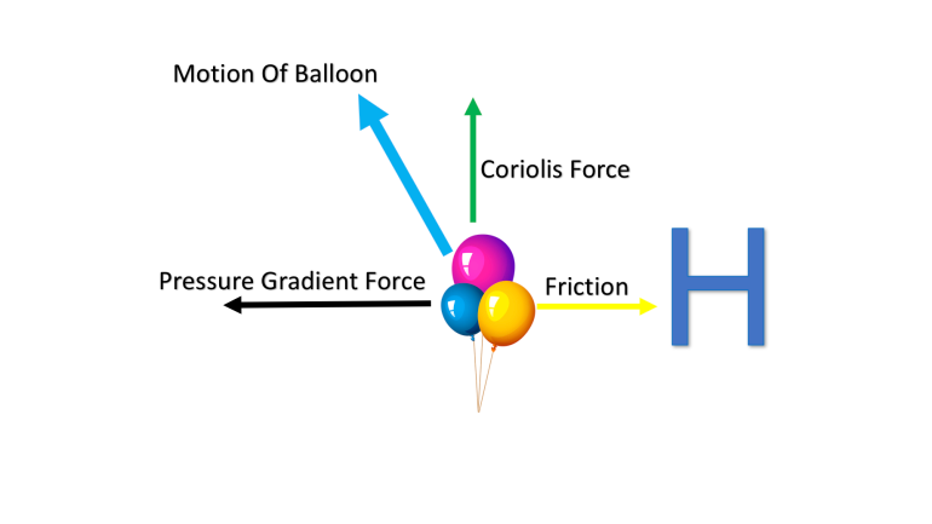 Similar to the previous low example, if you released three balloons at different locations around the high, you'd get a clockwise rotation away from the high. 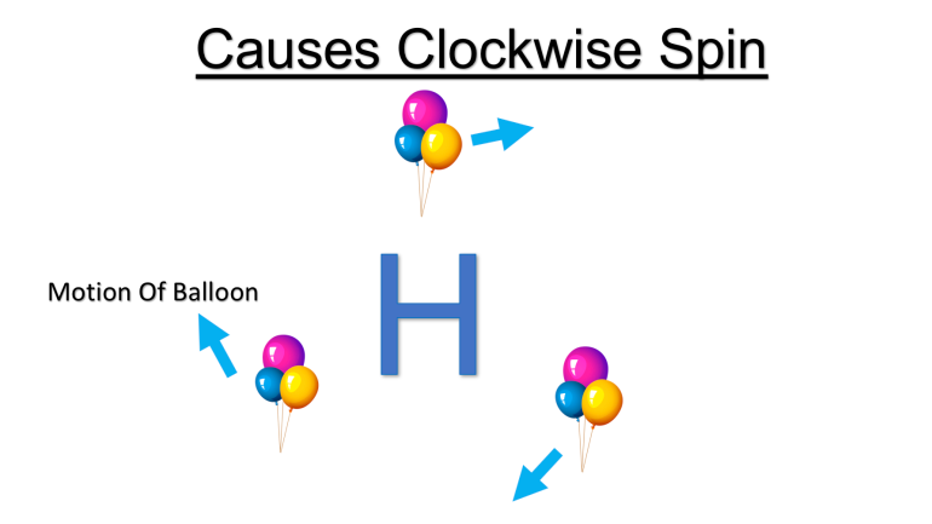 This is why on weather maps, you see air moving clockwise around and away from high pressure. On the left side, you typically get warmer air being drawn up from the south, and on the right side of the high, you get colder air coming down from the north. 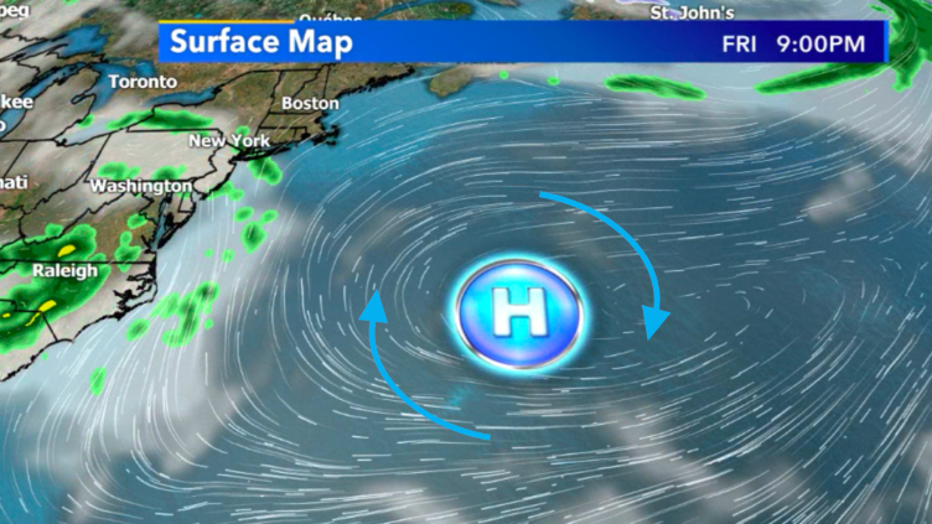 The pressure of the Earth is always changing and moving 24/7. Without pressure variations, we wouldn't get wind. Without wind and the motion of the atmosphere, we wouldn't have weather.