Between Dec. 5-12, Milwaukee will be entering a period of our earliest sunsets of the year. By Saturday, Dec. 5 the sun will set at 4:16 p.m. giving us only 9 hours and 9 minutes of daylight total. This isn't our shortest time of daylight, however. 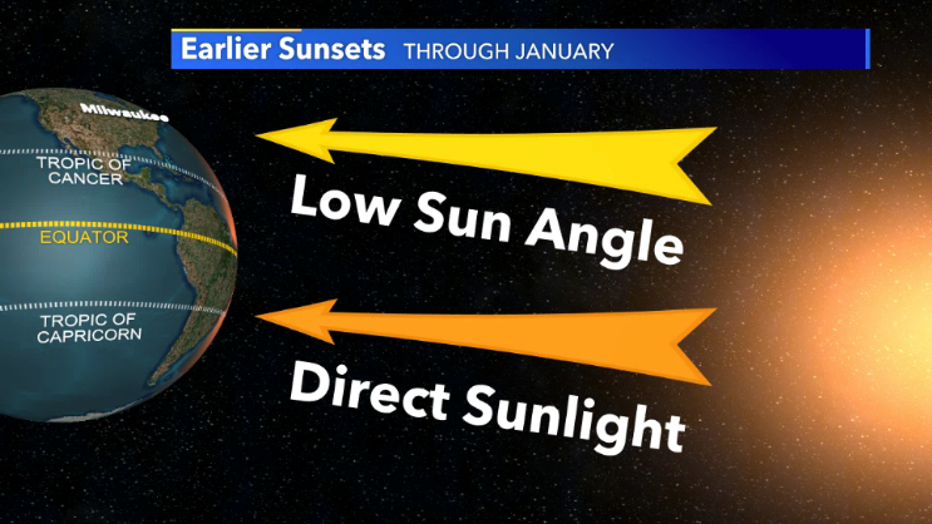 While we'll be soon having our earliest sunsets, we still have to wait a while for our shortest period of daylight. That won't occur until the Winter Solstice on Dec. 21 where we'll only have 9 hours of daylight in southeast Wisconsin.

At that same time, countries along the Tropic of Capricorn will be having their longest period of daylight of the year in the southern hemisphere. This is due to the Earth's rotation on an axis.

During Wisconsin's winter, the angle of the sun is lowest on the horizon, and is why our daylight hours are so short from Nov. through Feb.

Surprisingly, during winter in the northern hemisphere that is actually when the Earth's elliptical orbit is closest to the sun. This further proves how the seasons are not due to proximity to the sun during our orbit but instead based on the angle of the earth's rotation.