CAPE CANAVERAL, Fla. — SpaceX's chief said Wednesday that the first launch of its big new rocket is risky and stands "a real good chance" of failure.

Founder Elon Musk told a space station research conference Wednesday that he wants to set realistic expectations for the flight later this year from Cape Canaveral. The Falcon Heavy will have three boosters instead of one, and 27 engines instead of nine, all of which must ignite simultaneously. No one will be aboard the initial flights. When it comes time to add people, Musk said, "no question, whoever's on the first flight, brave."

While the moon may not be in Musk's personal travel plans, he said in response to a question that he'd like to ride one of his smaller Falcon rockets to the International Space Station in maybe three or four years. SpaceX plans to start ferrying NASA astronauts to the orbiting outpost, using Falcon 9 rockets and enhanced Dragon capsules, by the middle of next year. SpaceX now uses the Dragon capsule to deliver supplies to the space station. 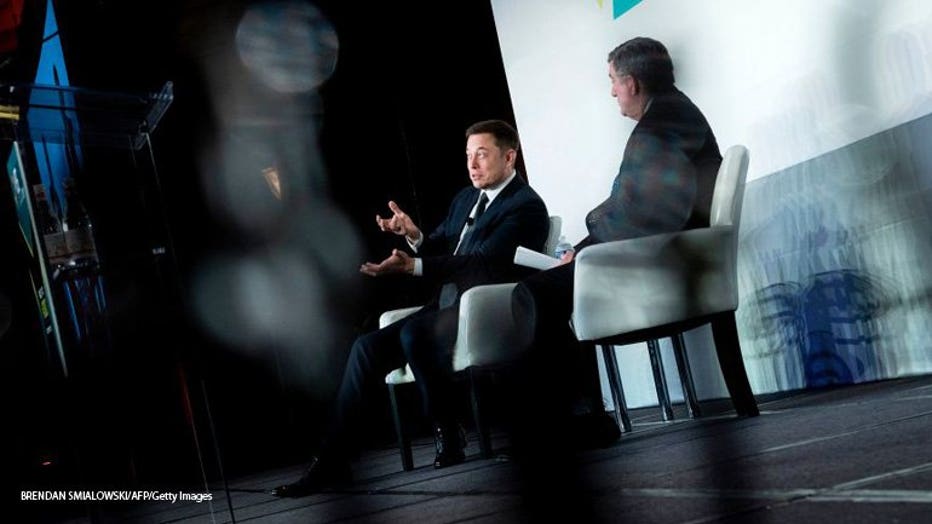 Speaking for over an hour at the Washington conference, Musk encouraged people to go to Cape Canaveral for the Falcon Heavy launch. "It's guaranteed to be exciting," he promised, getting a big laugh.

"There's a lot of risk associated with Falcon Heavy, real good chance that that vehicle does not make it to orbit," he said. "Major pucker factor, really, is like the only way to describe it."

Building the Falcon Heavy has proven harder than SpaceX envisioned, according to Musk. But it will be capable of lifting more than double the amount of payload into orbit than the current Falcon 9, and also hoisting a SpaceX Dragon capsule into a loop around the moon.

As for Mars, Musk said he favored friendly competition for getting astronauts to the red planet. NASA for years has supported an international effort. Musk said it would be better to have at least two or three-country coalitions striving to get there first and making the most progress.

He praised the model used by NASA in the commercial crew program, in which both SpaceX and Boeing are developing capsules for flying space station astronauts. Americans have not launched from home soil since the last shuttle flight in 2011, instead forced to use Russian rockets. The crew Dragons will parachute into the ocean just like the cargo Dragons; land landings were scrapped because of the work needed to make everything safe.

Musk said he's updated his long-term plan for colonizing Mars to make it more economically feasible. The vehicles will be smaller, although still big. He promised to share his evolving ideas at a September conference in Australia.

"Going to Mars is not for the faint of heart," Musk stressed. "It's risky, dangerous, uncomfortable and you might die. Now do you want to go? For a lot of people, the answer is going to be hell no, and for some, it's going to be hell yes."