If you were in southeast Wisconsin on February 2, 2011 you probably have some image of the crazy scene outside burned into your memory. As one of my friends told me weeks after the snow “I hit the garage door button and as the door went up, the wall of snow never seemed to stop!”

Some day when I reach a ripe old age I hope to have the chance to tell my grandchildren the story of the Groundhog’s Day Blizzard. By then the story will likely be exaggerated. I’ll describe the snowdrifts as towering over 2 story homes, the winds as strong as a hurricane, and the temperature colder than the Ice Bowl. So while the memory of that day is still relatively fresh (and accurate) here is my personal recollection of that day, though it’s no more special than the story of anyone else who still had to work that day.

I popped out of bed around 2:30-3am anxious to gaze out the window. But before navigating my way through the pitch black room I heard it, the roar of winds gusting over the house. I took in my first glimpse of the ongoing blizzard and it didn’t look all that bad. Of course at that moment I was in a cozy house and not yet face to face with the elements. 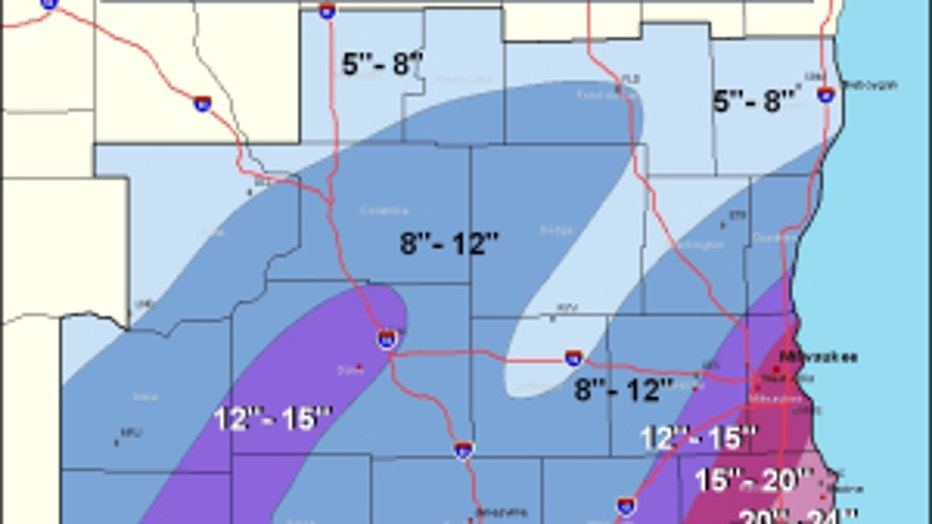 The garage door opened around 3:30am revealing a deep snowdrift piled at the end of the garage. But my greater concern was the much taller drift of compacted snow at the end of my driveway aided by a passing snowplow. Still, I wasn’t too worried. I drive an old Jeep with good ground clearance. And since I’ve driven it across a frozen Lake Winnebago without ever getting stuck, surely a few hours of snow wouldn’t be an issue.

I made it about 4 feet before stalling in the snow.

After digging out twice and throwing the shovel in the back of my car just in case, I was on my way. It was a lonely stretch of Brown Deer Rd. The only other cars I remember seeing were commercial plow drivers who tried to make their way into the parking lots of local businesses. Most of these plows/trucks got stuck with the first push into the lots, leaving the tail end of the truck dangling into the right lane of traffic. The road itself varied from visible pavement to 3 foot drifts. I weaved around the drifts and stalled plows getting to the station shortly after 4am.

My duty that morning was to assist Rob Haswell until 9am when I would take over the weather office. I jotted down info coming back to our station from reporters placed around the viewing area. One of the funnier scenes came from Angelica Duria in Racine, an area that picked up over 20”. Angelica stands a few hairs above 5 feet and was reporting from an area with drifts up to her eyeballs. Though it was unintentional, if we ever want to make a snowstorm look really bad, all we have to do is send our shortest reporter to the deepest snow! Even while standing in an open area, the snow often came up to her waist!

Keeping a path clear on the weather deck was no small challenge. Rob and I ended up shoveling a narrow path with just enough room for one meteorologist. The only problem was we were both on the deck, broadcasting at the same time. When I finished talking and turned to look at rob I had to keep from laughing since our noses were about 10” from each other. I had to keep my elbows braced to my side, sticking one out would have knocked him or me into the snow!

We stayed on the air until 1pm. By then the snows had tapered and gusts up to 60mph had subsided. I stuck around a short while longer to help Vince Condella  prepare his shows before heading home. A long day was coming to an end. Now all I had to do was clear out my own driveway.