Prescribed burns: Why Wisconsin is behind on the trend

Wisconsin has a complicated history with fire. This stigma has prevented the state from unlocking the ecological potential it has for wildlife in natural spaces.

MILWAUKEE - In the last 150 years, Wisconsin has been the site of some of the most extreme fires and land-use changes in United States history.

Settlers cleared forests, erased prairies, and wetlands, and shaped the land to provide livelihoods for farmers. Over time land management practices of Native Americans were pushed aside and forgotten. As a result, invasive species, declining threatened species, and habitat loss have become common.

It's not all doom and gloom as one of our biggest foes, fire could be our biggest ally when it comes to land management and stewardship in the future. "The single most cost-effective management tool that we have." Peter Dourkop, Ecologist with the Wisconsin Department of Natural Resources.

Prairies, woodlands, wetlands, and even farm edges were historically burned with prescribed fire but why did that all stop? 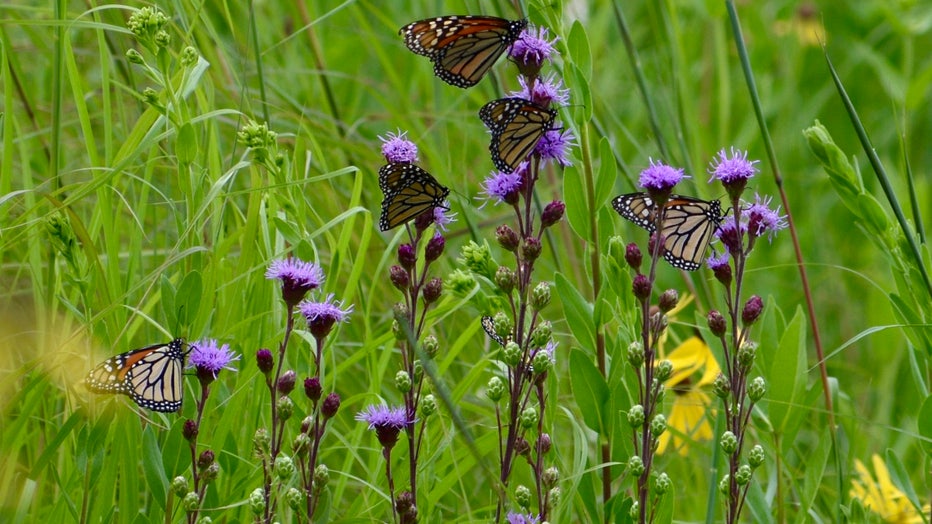 100 years of fire suppression resulted from years of catastrophic fires across the Great Lakes. Land-use changes in unprecedented scales, drought, and poorly designed cities made fires such as the 1871 Peshtigo Fire all too common. The Peshtigo Fire occurred the same day as the Great Chicago Fire and was even more deadly.

Over 1,200 people died and millions of acres burned. Entire towns were whipped off the map in hours. This hellscape you typically envision out west in mountainous wildfires but this extreme fire behavior happened right in our own state. 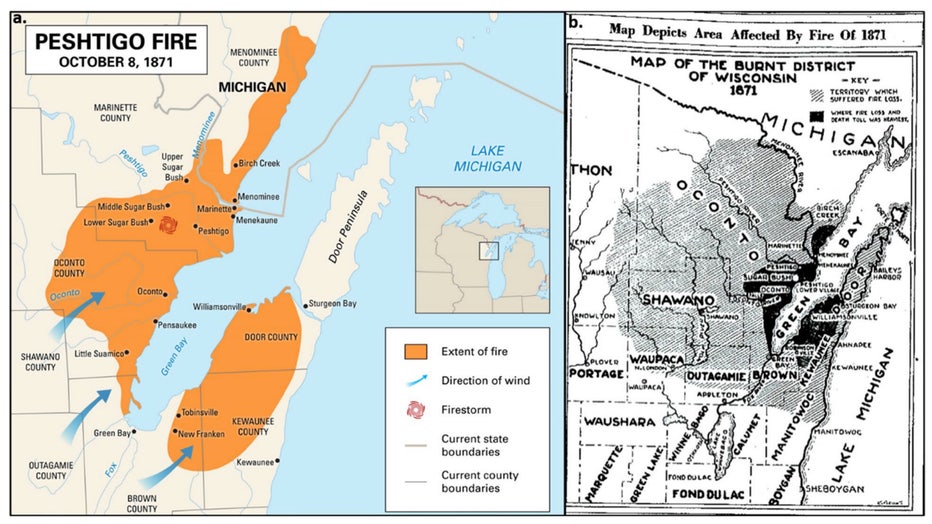 Understandably fire in the eyes of early Wisconsinites was bad and had to be stopped no matter what.

Jed Meunier a research scientist for the Wisconsin Department of Natural Resources ads, "After WW2 we added a whole new capacity for it (fire suppression), we added pilots wh knew how to fly and an abundance of planes and we put them to good use by detecting and suppressing fires."

With fire suppression, our land quickly changed. Woody species started taking over. Prairies started to become overrun with pioneer plants such as poplar and invasive such as buckthorn had nothing to slow it's spread in woodlands.

Wisconsin on a yearly basis averages around 25,000 acres of burns a year according to Meunier. In comparison to other states such as Kansas and Florida, they do over 1,000,000. "We should be burning a million acres per year according to my research", Meunier ads. Links to some of his research can be found at the end of the article. 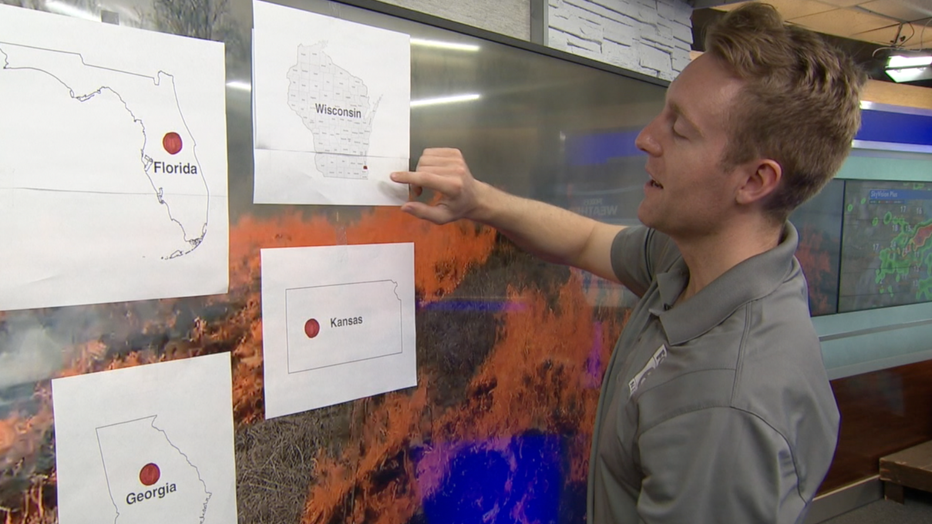 Red dots in Florida, Georgia, and Kansas represent 1,000,000 acres in size then compare that to how much Wisconsin burns. Not even ⅓ of Milwaukee county proportionally.

Once fire is returned to the landscape the benefits can be quite rapid. Native species in prairies and woodlands have deeper root systems than ornamental Asian or European species. They're perfectly adapted for our long winters and harsh summers but over browsing from deer and fire suppression prevent natives from standing a chance against the less palatable invaders.

Clearing your land of buckthorn, honeysuckle, and other non-native species is the first step before you can even begin prescribed burns.

Oaks, big blue stem, leadplant, silphiums and many other species have roots that extend well over 10ft into the ground. This literally stores carbon deep in the ground and locks it away for decades, "More reliably than forests alone" according to Dr. Dan Carter landowner services coordinator for the Prairie Enthusiasts.

Tallgrass prairies and Oak Savannahs are ecosystems that need fire to sustain themselves which was what much of Wisconsin was pre-settlement. Other than wetlands Oak Savannahs can host the most expansive biodiversity in the state when it comes to plants, insects, birds, amphibians, and mammals. 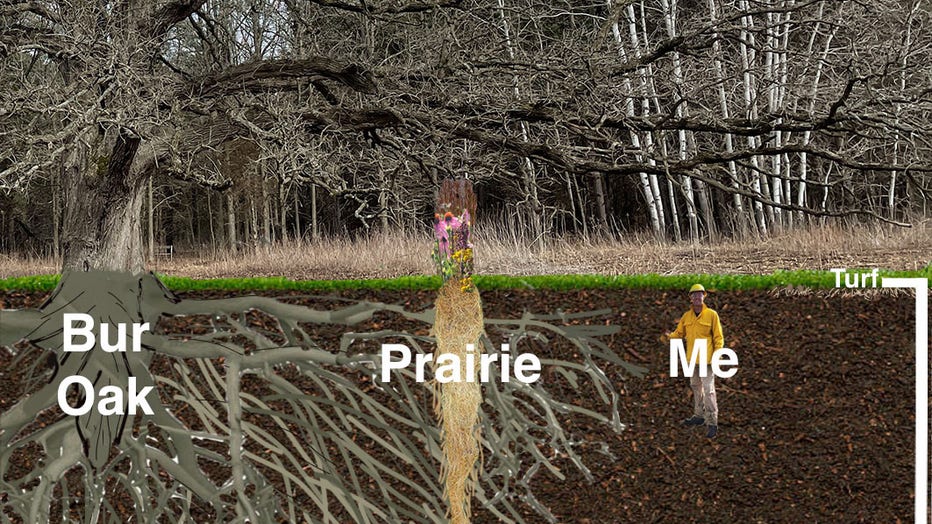 While not perfect to scale this image depicts root length by depth between a Bur Oak, Prairie, myself, and turf grass.

Before you even think about doing a prescribed burn contact your local prescribed fire council, link at the bottom of the story. It is important to be trained or have trained personnel leading your burn. You can't just go start fires all over the place and expect positive results. Each is carefully planned and staffed to ensure safety.

Once ready to put fire on the ground "Weather is the single driving factor for how we're going to do our operations", Peter Dourkop Ecologist with the Wisconsin Department of Natural Resources.

Wind and moisture levels dictate fire behavior the most and coordination with meteorologists is a priority before any prescribed burn. Knowing the weather for that day can allow you to control fires in desired areas and not put people, structures, and property at risk. 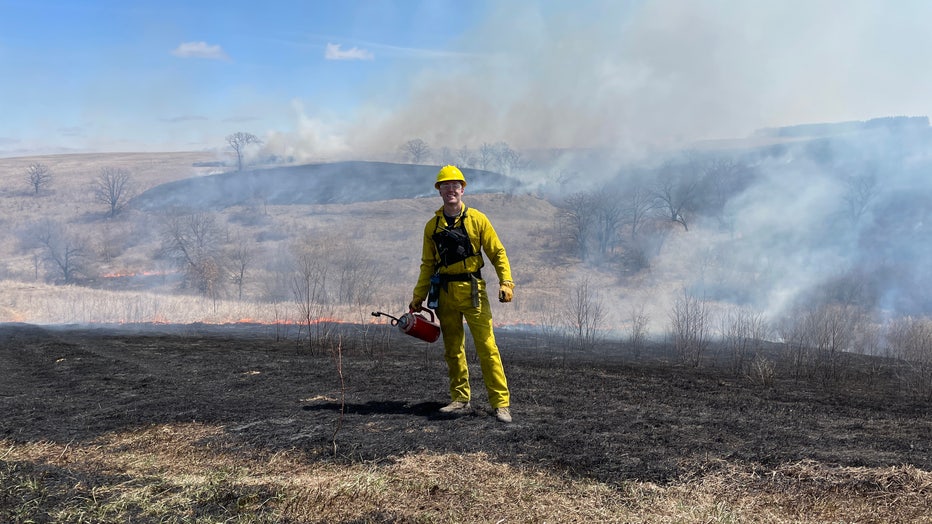 The Wisconsin DNR, Nature Conservancy, Prairie Enthusiasts, and most land managers that use fire do a typical concentric ring fire head fire sequence.

Once weather is favorable for safe conditions personnel ensure a fire perimeter is well established and clear of debris that could let fire escape into unwanted areas. With water and tools ready they begin with a backing fire, which is a fire backing into the wind and moving slowly.

Establishing black right away is key to act as a buffer between fire and areas you want to keep unburned. The fire crew will continue to move the fire outwards on the downwind line while making sure nothing is escaping behind them. 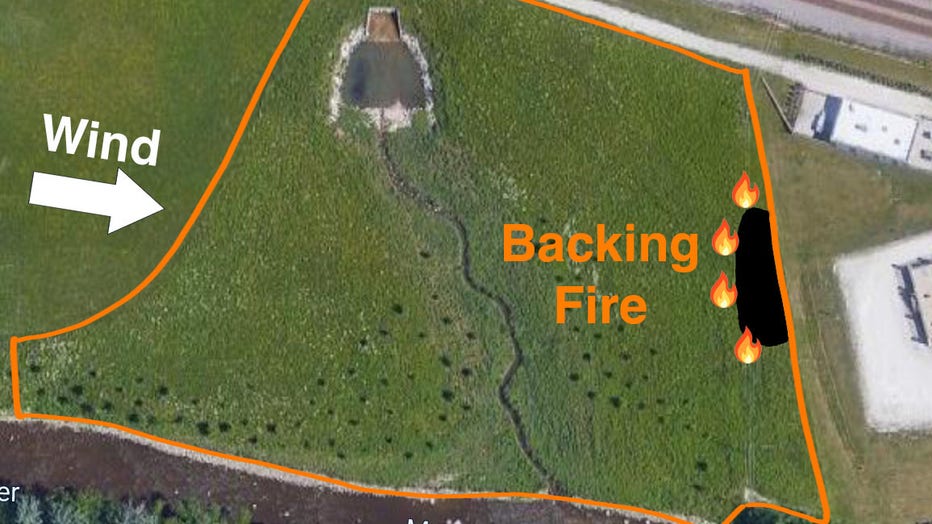 Backing fire is the first step in prescribed fire, fire moves slowly into the wind.

Once they reach the corners of the burn unit personnel burn parallel to the wind. This is called a flanking fire, it is more intense but still can be safely added to the backing fire to expand the blackened area throughout the unit. 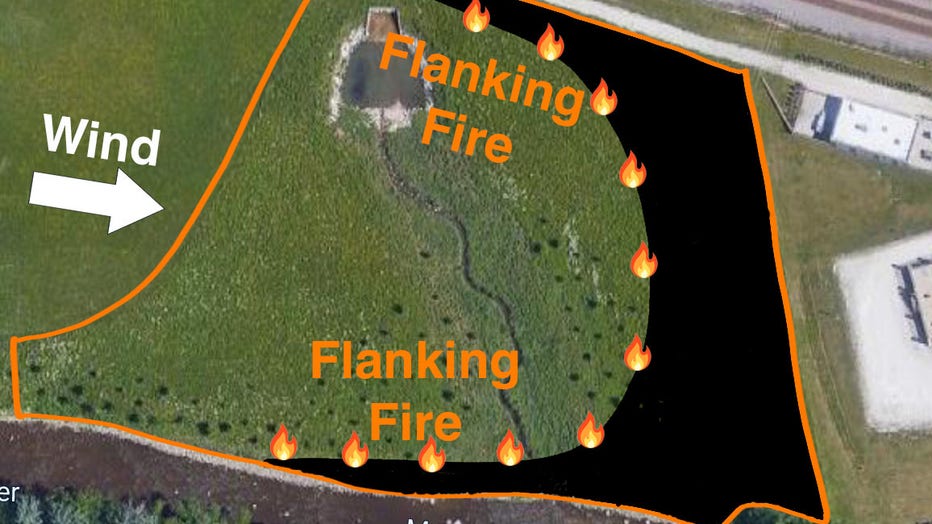 Once the upwind corners have been reached and the flanking fire has moved in a safe distance from the fire perimeter a head fire is set. Wind fans these flames higher and faster than a flanking and backing fire which is why it's important to do this step last once black is established well around it.

This also produces a strong updraft that can help reduce smoke at lower levels of the atmosphere. 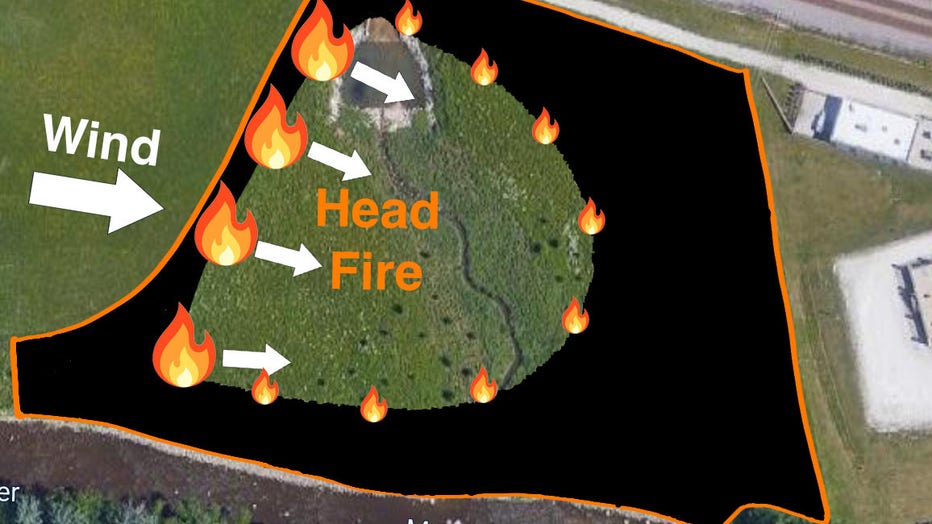 Head fire is the last step and is the fastest, most intense portion of the practice

With fire regiments, native species thrive. By reducing and suppressing fire on our landscape we have unintentionally harmed the biodiversity of the state and have made land management a lot more expensive than it has to be. 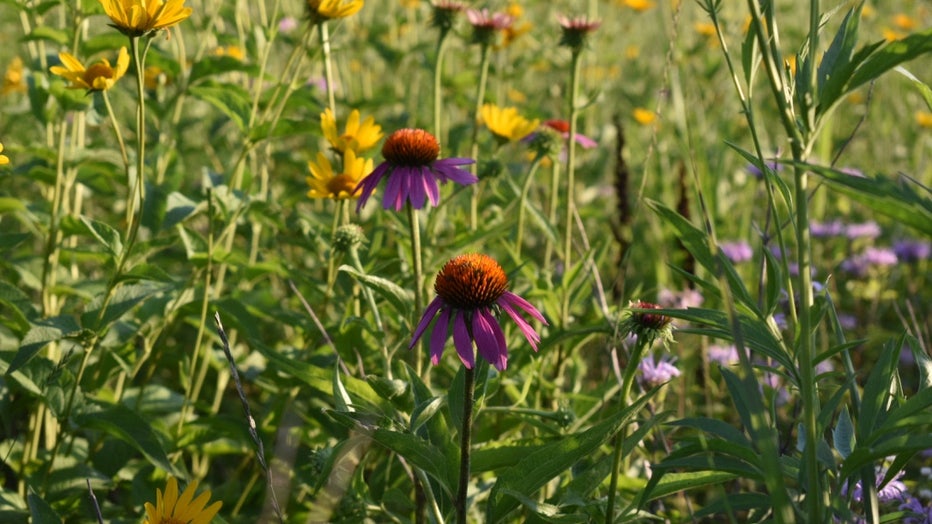 A small patch of tallgrass prairie species in Wauwatosa, WI. Included is Purple Coneflower, False Sunflower, Wild Bergamot, and Ironweed. Lower in the mosaic is goldenrod and aster species that have yet to flower. Each month a new species flowers. Wi

The Wisconsin Prescribed Fire Council should be the first contact you make in order to start doing burns on your property. Their resources and knowledge will set you up on the right track.

Prairie Enthusiasts and The Nature Conservancy of Wisconsin are two local groups you can get involved with if you don't have land of your own but would still like to help do prescribed fire in the future throughout Wisconsin. Also, talk with your local city public land manager and ask about their burn plans, if they don't have any it might be the right time to start considering.