MIAMI — Hurricane Michael, which devastated a swath of the Florida Panhandle last fall, was actually stronger than initially measured, prompting forecasters to upgrade it from a Category 4 storm to a Category 5 storm, the National Oceanic and Atmospheric Administration announced Friday.

The upgraded status means Michael was the first hurricane to make landfall in the United States as a Category 5 since Hurricane Andrew in 1992, and only the fourth on record.

"My thought is simply that most of us thought we were dealing with a (Category) 5 anyway," said Al Cathey, mayor of Mexico Beach, which bore the brunt of the storm when it hit.

National Hurricane Center scientists conducted a detailed post-storm analysis for Hurricane Michael, which made landfall near Mexico Beach, Florida, and Tyndall Air Force Base on Oct. 10, 2018. They've determined that its estimated intensity at landfall was 160 mph (257 kph), a 5 mph (8 kph) increase over the operational estimate used last fall, NOAA said in a news release. That puts Michael just barely over the 157 mph (252 kph) threshold for a category 5 hurricane. 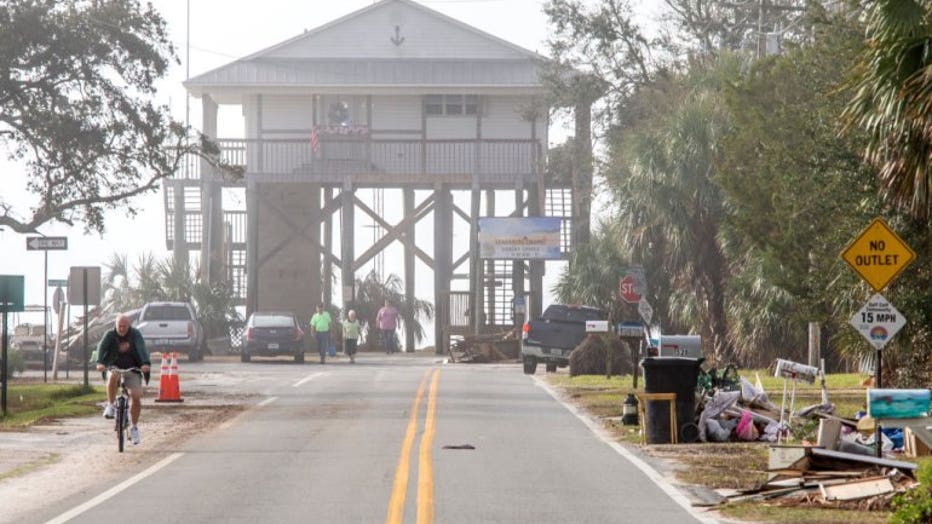 SHELL POINT BEACH, FL - NOVEMBER 06: As the sea fog rolls in, displaced voters pass through debris to vote in a new polling location after their regular polling building was damaged by Hurricane Michael at Shell Point Beach in Wakulla Country, Florid

Just 36 hours before hitting Florida's coast, Michael was making its way through the Gulf of Mexico as a 90 mph (145 kph) Category 1 storm.

But the reclassification doesn't come with the much-needed state and federal funding Cathey said is necessary to rebuild. "Whether it was a 5 or a 4, it really isn't relative to anything for most of us who are here. It's just another number," Cathey said Friday.

And the numbers tell the story in Mexico Beach, where Cathey said there were about 1,200 residents and 2,700 housing units before Hurricane Michael hit. Today, the population has dipped to about 400 people and there are less than 500 structures standing. And many of those suffered catastrophic damage. 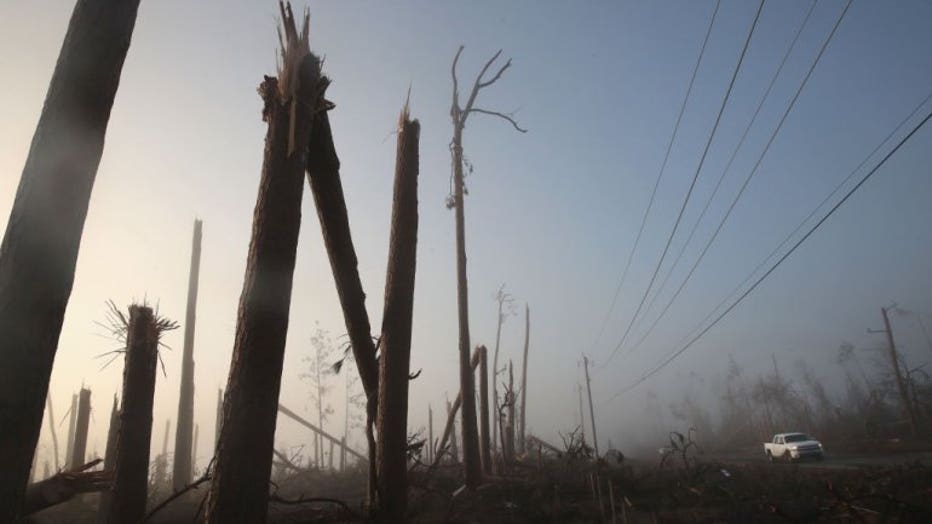 According to NOAA, Category 5 winds were likely experienced over a small area, and the change is of little practical significance. Both categories signify the potential for catastrophic damage. Michael was directly responsible for 16 deaths and about $25 billion in damage in the U.S., and parts of the Florida Panhandle, including Mexico Beach and nearby Panama City, are still recovering from the destruction more than six months later.

The new landfall speed was determined by a review of the available aircraft winds, surface winds, surface pressures, satellite intensity estimates and Doppler radar velocities, NOAA said. That includes data and analyses that weren't available during the storm. The increase in the estimated maximum sustained wind speed from the operational estimate is small and well within the normal range of uncertainty, NOAA said.

"You still ride through our city and it's depressing," Cathey said, adding that they've dealt with 1 million cubic yards (0.76 million cubic meters) of debris.

"We still don't have a pretty face. It's a mess," he said. "But we are working diligently at getting ourselves cleaned up and being proactive and helping people get their feet back under them."

In addition to Hurricanes Michael and Andrew, the only other Category 5 storms known to have made landfall in the U.S. are the Labor Day Hurricane that hit the Florida Keys in 1935 and Hurricane Camille, which ravaged the Mississippi coast in 1969. Michael is also the strongest hurricane landfall on record in the Florida Panhandle and only the second known Category 5 landfall on the northern Gulf coast.

Besides wind speed, atmospheric pressure is also used to measure storm intensity, with a lower central pressure generally meaning higher winds. Michael's central pressure at landfall is the third lowest on record for a landfall in the U.S. since reliable records began in 1900, trailing only the Labor Day Hurricane of 1935 and Hurricane Camille of 1969.