The blazing starlike object in the western sky after sunset is the planet Venus. We are accustomed to seeing it in the evening sky after sunset or in the morning sky before sunrise because it is an "inferior" planet to Earth. In this case, the word "inferior" means the planet orbits inside the Earth's orbit around the Sun. Venus is the second rock from the Sun, Earth is the third. Being inferior means we only see it either early mornings or early evenings. From our line of sight here on Earth, Venus never strays far from the Sun.

Lately you may have noticed that Venus is not too close to the horizon after sunset. It is quite high in the western sky and remains above the horizon even past 8 p.m. Venus is reaching its greatest elongation in late March. The elongation is its apparent distance from the Sun as seen from Earth.

So does Jupiter, the planet that seems to be following Venus along the ecliptic. Jupiter is the other bright starlike object appearing after sunset. It is high in the southwest sky at sunset. Over the next few weeks, Jupiter will close the distance to Venus. In mid-March they pass each other in the western sky. Watch for the two of them getting closer each night.

Add to the Venus-Jupiter combination the crescent Moon later this week and you have quite a show to watch in the post-sunset sky. Venus and the thin Moon will be close to each other on February 25; Jupiter and the Moon cozy up on February 26. Let's hope for clear skies. Nature is putting on quite a show. Enjoy! 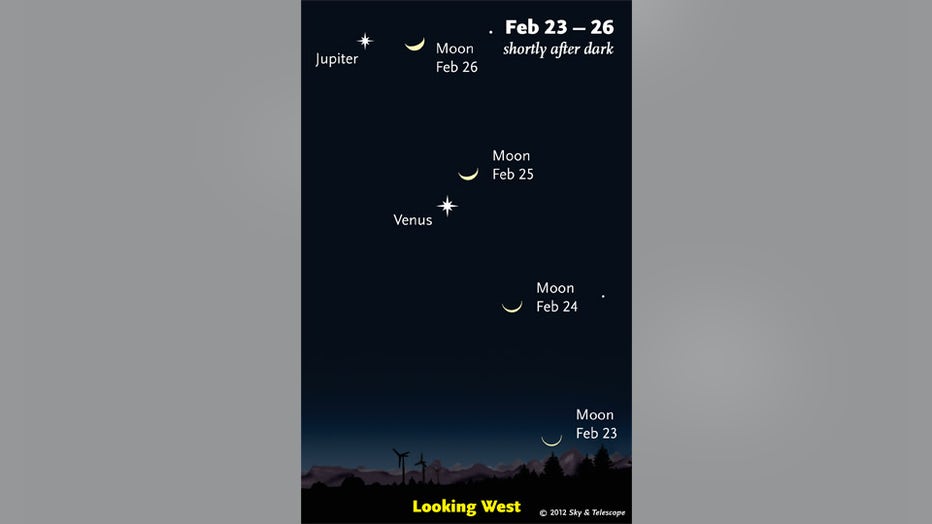 As an added bonus, on June 5, Venus will be passing between Earth and Sun. This is called the transit of Venus. Through telescopes with special solar filters (never look at the Sun through a telescope with the naked eye!), Venus will appear as a small black dot crossing the huge solar disk. This is a rare event. The last Venus transit visible to us was in 2004 and the next will take place in the year 2117.