The U.S. National Hurricane Center said the dangerous Category 3 storm hit near the town of Isla del Bosque in Sinaloa state. There were no early reports on damage.

The storm was moving inland at 10 mph (17 kph) and was forecast to quickly begin losing power.

Willa came ashore about 50 miles (80 kilometers) southeast of Mazatlan, a resort city that is home to high-rise hotels and about 500,000 people, including many U.S. and Canadian expatriates.

Although hotels, restaurants and stores were boarded over, people ventured onto Mazatlan's coastal boulevard to watch a spectacular sunset as the hurricane obscured the sky to the south. 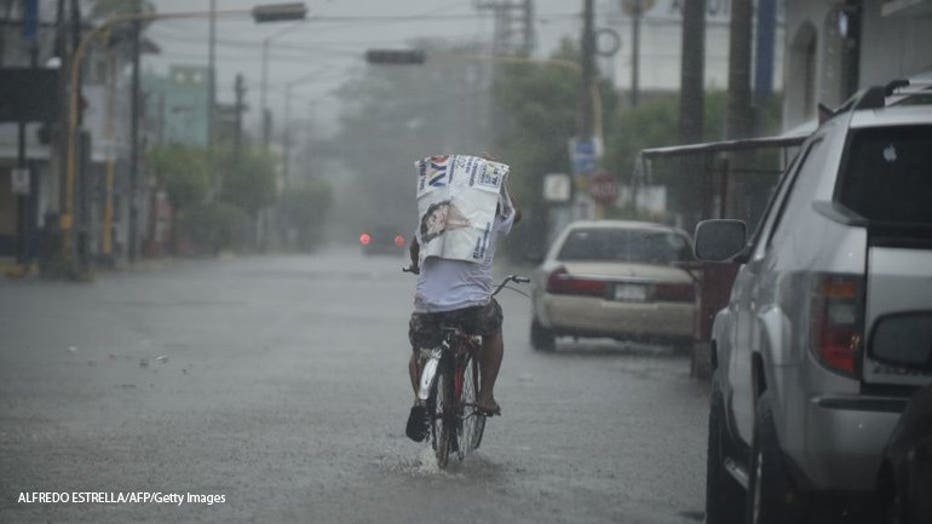 A resident rides his bike along a street as the Hurricane Willa arrives to Escuinapa, Sinaloa state, Mexico, on October 23, 2018. - Mexico braced Tuesday for the impact of Hurricane Willa as the Category 3 storm barreled toward its Pacific Coast with

Alberto Hernandez, a hotel worker in the town of Teacapan, close to where the storm made landfall, expressed confidence before it hit that the building would hold up. He and his son, who also works at the hotel, were staying on the job, though the rest of his family had left the area.

"We've had rain all day. There is nobody in the streets. Everything is closed," Hernandez said. "But not everyone wanted to leave, even though authorities made it clear that he who stays does so at his own peril."

Torrential rains began in the afternoon, and emergency officials said they evacuated more than 4,250 people in coastal towns and set up 58 shelters ahead of the dangerous storm.

The storm also battered the Islas Marias, a group of Mexican islands about 60 miles (100 kilometers) off the mainland that include a nature preserve and a federal prison. Federal authorities declined to comment on precautions that were taken at the prison, citing security concerns, but said the safety of prisoners was a priority.

As Willa closed in, the beach in Mazatlan almost disappeared, with waves slamming against the coastal boulevard under looming black clouds. A few surfers took advantage of the high waves even as workers boarded up windows on hotels, shops and homes. Schools were closed and the streets nearly empty.

Some families went to a Mazatlan convention center, which opened its doors as a shelter. They spread out blankets along the walls and waited for the storm.

"The house we're living in is not well built," said Sergio Ernesto Meri Franco, who rents a studio apartment.

The federal government issued a decree of "extraordinary emergency" for 19 municipalities in Nayarit and Sinaloa states.

Bob Swanson, who is from Saskatchewan, Canada, and spends two to six months of the year in his house in the Cerritos neighborhood near the shore in Mazatlan, said he filled his washing machine with water, topped up his home fuel tank and gassed up his car in case he needs to head into the mountains for safety.

"I'm kind of waiting with bated breath," he said over the phone, adding that he was sitting on his porch and smoking a cigarette.

Forecasters said the hurricane could bring 6 to 12 inches (15 to 30 centimeters) of rain — with up to 18 inches (45 centimeters) in some places — to parts of Jalisco, Nayarit and Sinaloa states, with flash flooding and landslides possible in mountainous areas.