I've always been a huge fan of astronomy. Going back to as far as I can remember, watching the stars and planets has been an interest of mine. Using either small telescopes or binoculars, I would scan the nighttime heavens as a nine or ten year old and go to the library to read up on anything astronomical.

I suppose it helped that I was brought up in the 1960s, when putting a human in orbit and then sending them to the Moon was a national priority. We had much to learn about the Moon and the planets, and we still do. NASA missions have been legendary over the decades, going beyond our wildest imaginations.

But these missions to space, most of them robotic, cost a boatload of money. Budgets are tight. Is it worth the millions and billions to explore our solar system and the universe beyond, or would this money be better spent on domestic projects? That is an argument that goes beyond the scope of my expertise and this blog, but it is a worthy question to ponder.

In the meantime, I was happy to see the recent cuts to the NASA budget did not include the Kepler mission. It has been green-lighted for four more years - at least. Kepler is an unmanned spacecraft launched in March 2009. It's mission is to literally stare at approximately 145,000 stars in a certain section of the sky and wait for them to blink. What does that accomplish? A lot.

The Kepler mission has uncovered over 2,000 possible exoplanet candidates, i.e. stars that may have planets orbiting them. Some of those planets have already been confirmed through further study.

Stars are enormously distant pinpoints of light. Kepler's powerful telescope watches for periodic dimming of starlight. This would be caused by a planet, in orbit around the star, passing between Kepler and the distant star. These measurements must be made carefully because an Earth-like planet orbiting a star like our Sun would cause a dip in brightness of only 85 parts per million, or 0.0085%. And if the orbital period of the planet is one year, like our Earth, then this dip in brightness would have to be measured in subsequent years to confirm the brightness dip. 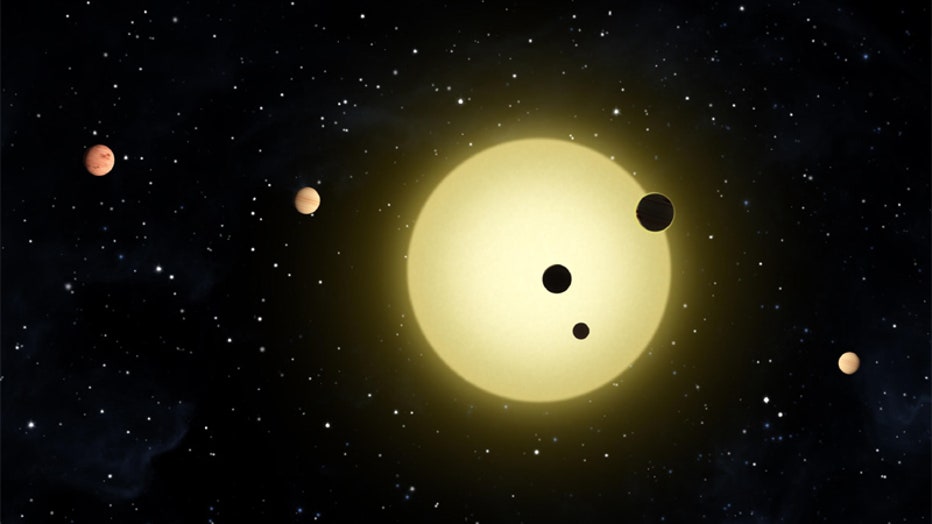 The Kepler mission's four year extension will cost $60 million. It continues to find exoplanets (planets outside of our solar system) and also studies the masses of these parent stars. Research from Kepler is also adding to the field of astroseismology by studying the vibration and pulsing of these stars.

Kepler will undoubtedly go in the books as one of the most successful NASA missions ever. To learn much more about this amazing spacecraft and what it has discovered, go to the Kepler mission page HERE.