One-hundred holes of golf in one day. That’s the feat Wauwatosa’s Matt Goodson is on a mission to complete. Lily Zhao goes Beyond the Game at Blue Mound.

WAUWATOSA, Wis. - One-hundred holes of golf in one day. That’s the feat Wauwatosa’s Matt Goodson was on a mission to complete.

"It's been fun," said Matt Goodson, golfing 100 holes in one day. "This is definitely way more than I’ve ever done before."

"It feels amazing. I mean, it really does," said Goodson. "I'm very appreciative to the members here because they've been great as far as donating."

Half of Goodson’s donations will go to PGA Reach Wisconsin, and the other half will go to Rogers Behavioral Health Foundation of West Allis.

It’s a foundation that’s near and dear to his heart. 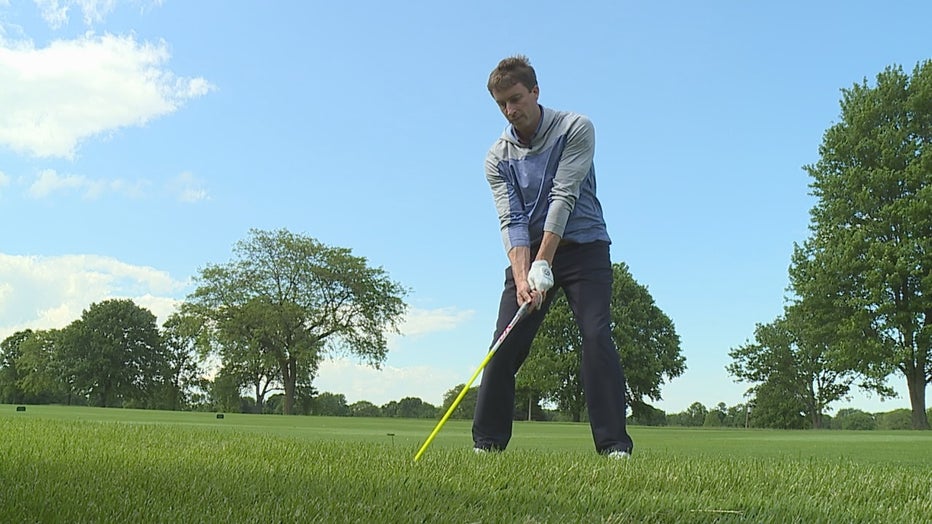 "I've had my own personal mental health struggles, and I feel like with the mental health crisis in this country right now after the pandemic, I feel like Rogers is a very important foundation and one that needs as much help as they can get," said Goodson.

Now, he’s in a position to help by playing the sport he loves.

"It feels really good," said Goodson. "I mean, it just feels really good for me. It's a way to feel like I'm kind of giving back because a lot of people have helped me to get to a better place than I was a year ago. So, yeah, it's just really good."

To make sure he completed all 100 holes, Goodson teed off bright and early at 7 a.m.

In his 27 years of golfing, he’s only ever played, at most, 54 holes in a day, so doubling that was quite the challenge.

One tee shot and one putt at a time, Goodson took the feat in stride.

"It's hard," said Goodson. "I've lost focus a few times today, and I've had to take a few breaks, get lunch, come in for a little while. It is kind of hard, but I mean, just kind of try and refocus yourself. Every hole is a new hole, so get through a hole. I'm not really keeping score, which is kind of nice, and just playing, so it's fun."

FOX6 caught up with Goodson through 65 holes, and he could already envision the finish line.

"Definitely starting to feel it a little bit," said Goodson. "We're going to try and power through the last 35 holes and get done."

After 12 hours and 15 minutes on the course, complete with 15 birdies, Goodson finished his 100 Holes of Golf – a big undertaking for a great cause.

To donate to Goodson’s cause, visit: https://givebutter.com/wpga100years/mattgoodson