WEST LAFAYETTE, Ind. — Jonathan Taylor rushed for a career-high 321 yards and scored three times including the decisive 17-yard run in triple overtime to give Wisconsin a 47-44 come-from-behind victory at Purdue on Saturday.

Taylor's 33 carries matched his career high from earlier this season and helped the Badgers (7-4, 5-3 Big Ten) avoid back-to-back losses for the first time this season.

Wisconsin has won 13 straight in the series dating to 2004.

Fifth-year senior David Blough threw for 386 yards and four touchdowns in his final game at Ross-Ade Stadium but came up short of leading the Boilermakers (5-6, 4-4) to a bowl-clinching victory. Freshman Rondale Moore had nine catches for 114 yards and two scores — wiggling his way through four Badgers defenders on a 15-yard TD catch in the first overtime.

Purdue appeared to be headed toward its crucial sixth win after Markell Jones bounced off a defender and scored on a 12-yard run and Moore caught a pass on the move, made a nifty move at full speed and scored on the 46-yard play to make it 24-13 with less than a minute to go in the third.

But the Badgers charged back.

Danny Davis made a spectacular one-handed, 5-yard grab near the sideline to cut the deficit to 27-20. He tied it with an 18-yard TD catch with 2:51 left in regulation.

Taylor then matched Moore's score with a 12-yard TD run. And after the teams traded scores in the second overtime, Purdue made a 41-yard field goal in the third overtime to take a 44-41 lead. 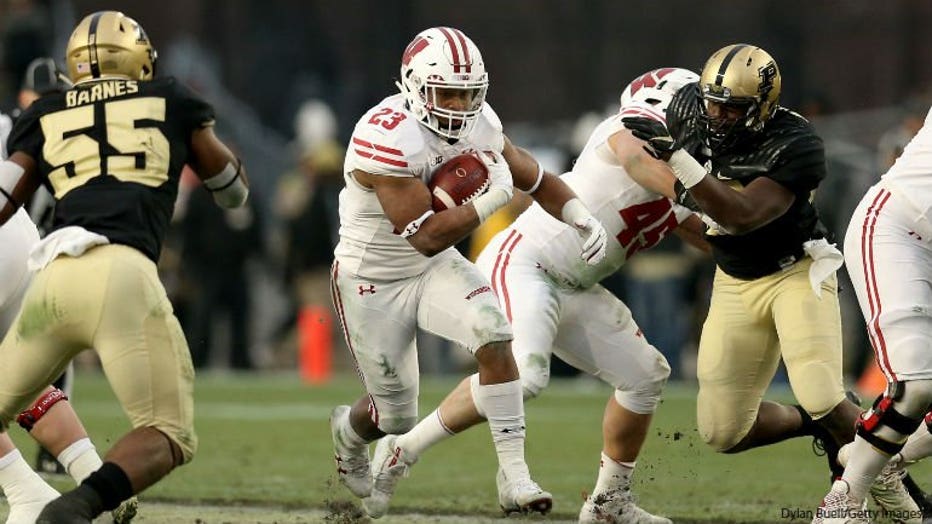 Wisconsin: The Badgers got their first win in three tries without injured quarterback Alex Hornibrook and though it won't save their playoff hopes or Big Ten title aspirations, it should give the Badgers a shot at a better bowl game.

Purdue: The Boilermakers let this one slip away and it could prove costly as they'll have to win their regular-season finale on the road to extend coach Jeff Brohm's streak of making a bowl game in every season he's been a head coach.

Wisconsin: The Badgers drew 13 penalties for 171 yards. ... Quarterback Jack Coan made his second straight start and was 16 of 24 with 206 yards and two TDs. ... A.J. Taylor had five catches for 89 yards while Davis had four receptions for 82 yards.

Purdue: Blough had has seventh 300-yard game of the season and tied Curtis Painter (12) for the second most in school history. He also moved into third in school history in pass attempts and TD passes. He was 31 of 48. ... Markell Jones moved into eighth on the school's career rushing list and tied Stan Brown for No. 9 all-time in career TD runs (19). ... Terry Wright caught five passes for 99 yards. ... D.J. Knox ran 11 times for 39 yards and had five receptions for 49 yards and one TD.

Wisconsin: Hosts Minnesota next Saturday for the Paul Bunyan Axe.

Purdue: Closes out the regular season with its biennial trip to rival Indiana next weekend.