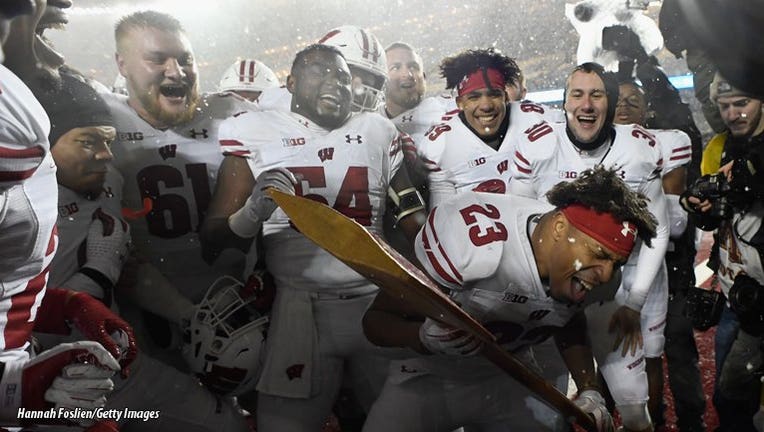 MINNEAPOLIS -- Minnesota's claim to Paul Bunyan's Axe in the Wisconsin-Minnesota rivalry didn't last long -- one year to be exact.

The Badgers beat the Golden Gophers 38-17, Nov. 30 to take back the Axe after a one-year layover in Minneapolis. Jonathan Taylor scored three touchdowns -- two rushing, one receiving.

The win also clinched the Big Ten West Division title for the Badgers, who finish conference play 10-2 -- Saturday's win serving as a tiebreaker with the 10-2 Golden Gophers.

Wisconsin will play Ohio State for the Big Ten Championship. It'll be a rematch of the 2017 championship, which Ohio State won 27-21. It will be Wisconsin's sixth appearance in the title game since it began being played in 2011 -- the Badgers' first since 2017.

Wisconsin went three-and-out to open the game, handing the ball over to Minnesota. It only took Minnesota two plays to open the afternoon's scoring. Tanner Morgan completed a pass to Rashod Bateman for a 51-yard touchdown -- just two minutes and 15 seconds into the game.

On the ensuing drive, Wisconsin kicker Zach Hintze made a 26-yard field goal. Eventually, the Badgers found the endzone -- Jack Coan completed a 28-yard pass to Jonathan Taylor, giving the Badgers a 10-7 lead.

Quintez Cephus and Jack Coan connected on a 31-yard play minutes into the third. Later that same drive, the two made a bigger play -- 47 yards to the endzone.

Minnesota responded with a field goal shortly after.

After a big kickoff return by Aron Cruickshank -- to the Minnesota 39 -- the Badgers needed just two plays to score again. The scoring play came on a 26-yard run from wide receiver Kendric Pryor.

Refusing to let off the gas, Wisconsin score another touchdown in the fourth. This time Jonathan Taylor scored on the ground, an 11-yard scamper.

Minutes later, Taylor did it again -- scoring from 1-yard out.

The Golden Gophers scored with just over five minutes remaining in the game -- a 12-yard touchdown pass from Morgan to wide receiver Tyler Johnson.