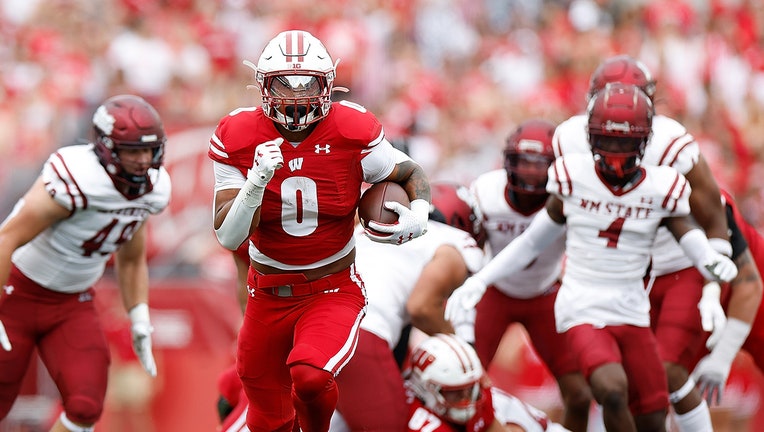 The three-TD performance for Allen matched a career high. The sophomore running back finished with 15 carries for 86 yards and three scores for the Badgers (2-1), who rebounded from a 17-14 loss last week to Washington State.

Allen broke away for a 39-yard rush for a score to give Wisconsin a 7-0 lead just 90 seconds into the game.

Allen’s effort marked just the third time in his last 12 games that he’s been held under 100 yards.

Chez Mellusi had a 2-yard touchdown run to cap a seven-play, 63-yard yard drive that pushed Wisconsin’s lead to 14-0 with 14:56 to go in the first half.

Keontez Lewis caught an 18-yard touchdown pass to increase the Badgers’ lead to 21-0 with 12:22 left in the first half.

Badgers linebacker Maema Njongmeta got a pick on an Aggies deflection at New Mexico State’s 2-yard line that set up Allen’s second TD two plays later, a 1-yard rush that pushed Wisconsin to 28-0.

Myles Burkett, a true freshman, replaced Mertz with 5:34 to go in the third quarter. Deacon Hill was inserted with less than 30 seconds remaining in the third.

The Aggies (0-4) just had 100 yards of offense in the first half. They collected 82 yards during a 13-play drive with less than 3 minutes remaining.

New Mexico State kicker Ethan Albertson missed a 29-yard field goal try with 4 seconds left in the first half and its only score was a 1-yard rush for a touchdown by Ahmonte Watkins with 8:10 left in the game.

The Aggies got flagged seven times for 68 yards in the loss.

Wisconsin kicker Vito Calvaruso, who missed 51- and 43-yard field-goal attempts last week in the Badgers’ 17-14 loss to Washington State, was sidelined with a right leg injury.

Wisconsin, which fell out of the Top 25 poll last week, likely won’t gain much ground to get back in the rankings.

Wisconsin: The Badgers play at No. 3 Ohio State on Saturday.