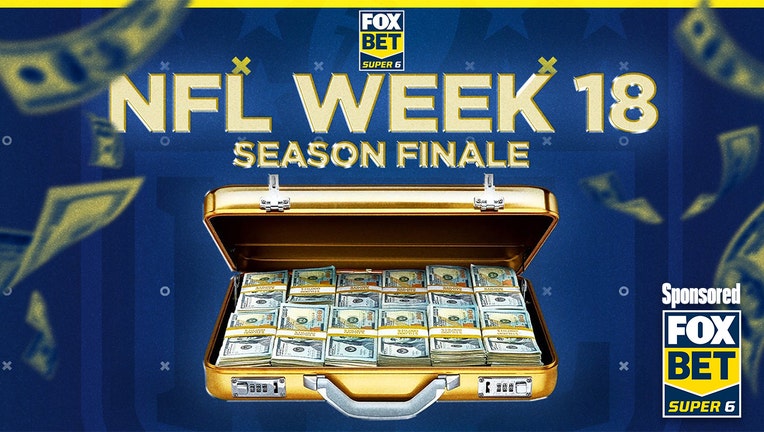 Siri, play Boyz II Men, "It's So Hard to Say Goodbye to Yesterday" because the NFL Week 18 Season Finale has got us feeling very emo.

Now, if you've been with us all year, you know we've had fans win everything from the million-dollar prize to a state-of-the-art entertainment system. People really do win. So it's your turn to try to score big by playing.

FOX Bet Super 6 is a free-to-play contest where you pick the winners of all six marquee games with their margins of victory for a chance to win $100,000 in our NFL Sunday Challenge. Just download the FOX Bet Super 6 app on your phone or mobile device, make your picks and submit your selections before Sunday’s games kick off.

Oh, and did we mention that it's so easy and, more importantly, FREE to play?

But you have to get in the game to get the green. So before you make your predictions for Sunday's marquee matchups, read all about our picks below.

Since Tampa Bay has already clinched its playoff spot as the NFC South champions, you'd think this game might not matter as much. But then you remember that if Tom Brady loses this matchup, that would mean he'd clinch the first losing season of his career.

Not on Tom Terrific's watch.

As a matter of fact, Brady mentioned on his Let's Go podcast earlier his week that, despite the Bucs being locked into their playoff spot, he plans to play.

At FOX Bet, the Bucs are currently 4.5-point underdogs. But if we take Tom's word that he and other starters are suiting up, fading the Falcons here should be easy.

Buccaneers by 4 to 5 points

A win for the Vikings this week would mean they would post 13 wins or more for only the third time in franchise history. And this weekend, Minnesota faces a Bears team that's playing for pride while the Vikes, on the other hand, are playing out of pure obligation.

Minnesota has already secured a playoff berth, and most likely, they'll end up as the No. 3 seed behind the Eagles and the Niners. So Vikings -7.5 points at FOX Bet seems like too big of a spread considering Minnesota has a good grasp on its postseason fate.

So what should we expect in the season finale between these NFC North foes? Bears quarterback Justin Fields is going to sit the finale, which means Minnesota will win. The Vikings won't be too motivated, so look for them to take home the win, but not by much.

Vikings by 4 to 5 points

The 7-9 Jets enter this contest having been eliminated from playoffs while the 8-8 Dolphins come into this matchup on the postseason bubble. At first glance, you'd go, "Dolphins should win easily." However, this game between conference rivals will come down to the wire.

Miami has benefited from having offensive weapons like Tyreek Hill on the roster, but the squad has missed having consistent play from Tua Tagovailoa because concussion protocol has forced him to miss several games. Week 18 will be another matchup the third-year QB will miss. And with second-string quarterback Teddy Bridgewater hurt, third-stringer Skylar Thompson is expected to start for Miami.

Both squads are on five-game losing streaks, but only one is playing for the postseason. So in this AFC East showdown, we're going with the 1-point underdog Dolphins to squeak one out.

Dolphins by 1 to 2 points

Oh, the lowly NFC South. The division where the team that owns it could very well end up having a losing record. When these two teams last met in Week 3, Carolina won 22-14. And the Panthers are on the prowl as they seek their first season sweep on the Saints since 2015.

Unfortunately for the Panthers, they'll miss the mark again.

New Orleans is on a three-game winning streak and playing good football. The Saints' tight end group has accounted for 17 touchdowns this season. That's tied for the most in the NFL as a group with Kansas City.

At FOX Bet, NO is favored by 3.5 points. We like the Saints to go marching into the offseason with a win.

Looking at the trajectory of Pittsburgh's season, who would've thought that in Week 18, the Steelers would have a chance to sneak into the playoffs? But sneak is the operative word here.

For Mike Tomlin & Co. to clinch a Wild Card spot, they need to beat the Browns, the Dolphins to lose to the Jets and the Patriots to lose to the Bills. Technically, all stars could align for the Black & Gold, but for now, let's focus on their game.

The Steelers' 8-8 season has been underwhelming but with a few bright spots. Since Week 13, the Steelers are one of two teams holding opponents to under 150 yards passing per game, and safety Minkah Fitzpatrick is tied for the league lead with six interceptions. Running back Najee Harris is 46 rushing yards away from 1,000 for the season.

So will the Steelers whip up a win against a dismal Cleveland squad in this season finale and do their part to keep their postseason dreams alive? Absolutely.

At FOX Bet, Pittsburgh is a 2.5-point favorite. We're siding with the oddsmakers on this one and taking Pittsburgh to win but by at least a touchdown.

Dallas is in. Washington is out. But if the Cowboys aspire to do better than their current fifth-seed position, they'll put their best boot forward in this game.

A Dallas win, coupled with a Giants win over the Eagles, means America's Team would own the NFC East. If all that happened AND if the Niners fell to the Cardinals, then Dallas wins the No.1 seed in the NFC and gets a first-round bye. Long-winded way of saying this game matters.

Since Week 9, the Cowboys are averaging 34.8 points per game, and also since Week 9, they are the only team that averages 250 plus passing yards and 125 or more rushing yards per contest. Zeke's 12 rushing touchdowns are tied for fifth in the league, and CeeDee Lamb's eight receiving TDs are tied for seventh. They have the offensive firepower to roll in this game.

Look for Dak and crew to cover the 7.5-point spread and then some as they try to claw their way to the top of the conference.

How to play FOX Bet Super 6

It's your turn to jump in and win some money this last week of the NFL regular season!

After you download the app and submit your selections for the upcoming contest, be sure to share your picks with us by tagging @FOXSuper6 and @EricaReneeD and using the #EricaSuper6 hashtag across all social media platforms.

Download the FOX Bet Super 6 app for your chance to win thousands of dollars on the biggest sporting events each and every week! Just make your picks and you could win the grand prize. Download and play today!