SANTA CLARA, California — If this was the final game of Peyton Manning's 18-year career, he couldn't have scripted the ending much better.


A 2-yard rushing touchdown from running back C.J. Anderson -- in addition to a defensive score and three field goals from kicker Brandon McManus -- gave the Denver Broncos a 24-10 win over the Carolina Panthers in Super Bowl 50 in front of 71,088 at Levi's Stadium in Santa Clara, California. Broncos outside linebacker Von Miller, who had two strip-sack fumbles of Panthers quarterback Cam Newton, was named Super Bowl Most Valuable Player.

Manning, at 39, is the oldest starting quarterback in Super Bowl history. Going into Sunday, he hadn't confirmed if Super Bowl 50 would be his last game. But it sure felt that way. And like his boss, Broncos general manager and executive vice president of football operations John Elway, Manning can ride off into the sunset after securing his second championship in his career.

After the win, Manning was noncommittal on his future.

"You know, I'll take some time to reflect," Manning said. "I have a couple of priorities first. I want to go kiss my wife and my kids, I want to go hug my family. I'm going to drink a lot of Budweiser tonight. I promise you that. I'm going to take care of those things first, and say a little prayer to thank the man upstairs for this great opportunity. I'm just very grateful."

Manning is also the first quarterback to win a Super Bowl with two different teams. He also won Super Bowl XLI when he was with the Indianapolis Colts.

With the win, Manning became the first NFL quarterback with 200 career wins (186 regular season and 14 postseason). He had been tied with Brett Favre, a member of the Pro Football Hall of Fame Class of 2016, with 199.

"Being on two different teams, winning a Super Bowl with each team, I'm proud of that," Manning said.

Manning -- good enough for the win

Manning didn't play flawlessly, but he did enough, which is all a suffocating Broncos-led defense has needed this season. Manning's line: 13 of 23 passing for 141 yards with one interception and a lost fumble.

Manning's 18th -- and perhaps final -- season has been his most challenging.

He was benched for the first time in his career, which was a loss to the Kansas City Chiefs in November. While backup Brock Osweiler filled in, Manning missed six games because of a partially torn plantar fascia in his left foot.

But in Week 17, Manning returned, coming off the bench to lead Denver to a win over the San Diego Chargers to clinch a first-round bye in the playoffs.

Manning called it "a unique season."

"I certainly knew with this defense that this team would have a chance," Manning said. "Our defense has just been from the get-go, they've been nothing but awesome. Being hurt, the struggle early in the season wasn't a lot of fun, so I was grateful to get back healthy and to try to play my part these last couple of weeks."

It started well for the Broncos (15-4) on their opening drive, capped by a 34-yard McManus field goal to take an early 3-0.

The Panthers, having lost just once coming into this game, were accustomed to having their way offensively.

But Carolina didn't face a defense like Denver's all season. The Broncos lead the NFL in total defense, pass defense and sacks. Newton got to see -- and feel -- that up close. He was sacked seven times, tying a Super Bowl record.

The one that was the most costly came in the first quarter, Carolina's second turn on offense. On Carolina's 15-yard line, Miller forced a Newton fumble on the strip sack for an 11-yard loss while defensive end Malik Jackson scooped up the ball for the score to give Denver a 10-0 lead. It was the first fumble recovery for a touchdown in a Super Bowl in 22 years.

Courtesy of a huge mistake by Broncos' cornerback Aqib Talib, the Panthers were able to capitalize and get on the scoreboard with a 1-yard run by running back Jonathan Stewart. What transpired the play before was a face mask personal foul penalty by Talib.

Talib had a terrible first half with three penalties, two of which were personal fouls.

But Carolina squandered an opportunity early in the third quarter when a 44-yard field goal attempt by Graham Gano hit the right upright. Later in the quarter, Newton threw an interception into the hands of safety T.J. Ward, quashing a promising drive that had Carolina in Denver territory.

Gano hit a 39-yarder with 10:26 remaining to cut the deficit to 16-10, but late in the period, Miller forced his second fumble from Newton. Ward recovered and returned it to the Carolina 4-yard line. Anderson iced the game with Denver's first offensive touchdown of the day with 3:08 left.

"I just wanted to key into my guy, key into my tackle, the center, key into Cam," Miller said on his strip sacks. "His cadence is definitely one of the hardest to get down in the National Football League. We just keyed in. That's the type of defense that we've been playing all year long."

Newton, named the 2015 NFL MVP on Saturday, finished the day 18 for 41 for 265 yards and those three turnovers (two fumbles, one interception).

Following the game, Newton for the most part kept his answers terse.

"We had our opportunities," Newton said. "There wasn't nothing special that they did. We dropped balls. We turned the ball over, gave up sacks, threw errant passes. That's it. They scored more points than we did."

When asked to put his disappointment into words, all Newton would say was, "We lost."

"Played a heck of a football game," Panthers coach Ron Rivera said of Miller. "He deserves to be the Super Bowl MVP."

McManus, meanwhile, stayed perfect in the postseason, going 10 for 10 overall. He finished the day with three field goals for 34, 33 and 30 yards.

Game-time temps hovered around 70 degrees at kickoff in a beautiful day in Santa Clara. The game also had a throwback feel.

With kickoff at 3:30 p.m. local time (6:30 p.m. ET), the game basked in daylight for the first half, making it feel reminiscent all the way back to Super Bowl I -- then called the "First AFL-NFL World Championship Game" -- which was held in Los Angeles on January 15, 1967.

The crowd -- mostly pro-Broncos fans judging by the amount of orange in the stands, though both fan bases still were well-represented -- filled up Levi's Stadium quickly.

Both sides got their vocal chords warmed up when the NFL honored all of the previous Super Bowl MVPs. Manning was in the locker room when his name was called, but that didn't stop a huge roar from the crowd.

It then turned into adoration for Lady Gaga, who belted out a stirring rendition of the national anthem. The energy level also remained at a fever pitch for the halftime show featuring Coldplay, Beyonce and Bruno Mars. 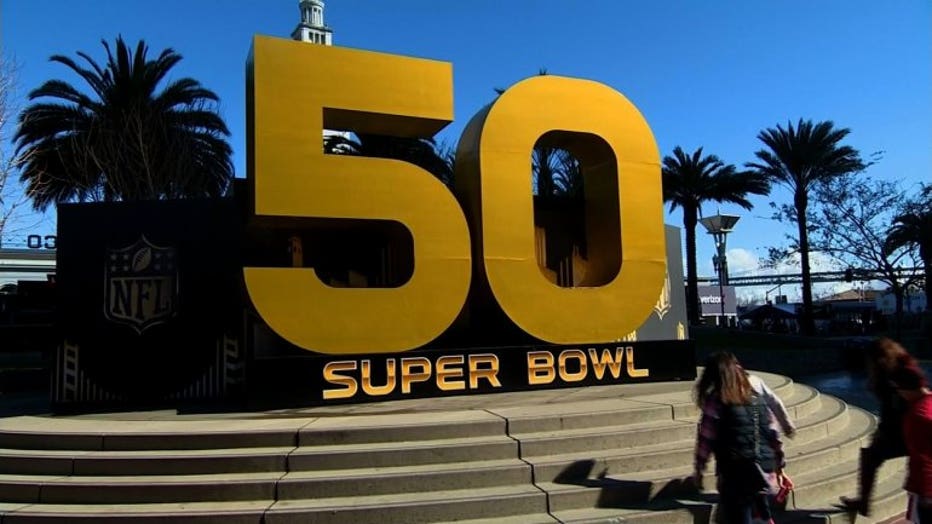 Fans and media are gearing up for the big game at Super Bowl City in San Francisco.