NEW YORK -- They’re called “Simone Things,” a catchall phrase for the casual ease with which Simone Biles seems to soar through her sport and her life.

The irony, of course, is that there’s nothing casual or easy about it. Any of it. The greatest gymnast of all time and 2019 Associated Press Female Athlete of the Year only makes it seem that way.

Those jaw-dropping routines that are rewriting her sport's code of points and redefining what can be done on the competition floor? Borne from a mix of natural talent, hard work and a splash of ego.

The 25 world championship medals, the most by any gymnast ever? The result of a promise the 22-year-old made to herself when she returned to competition in 2017 after taking time off following her golden run at the 2016 Olympics. 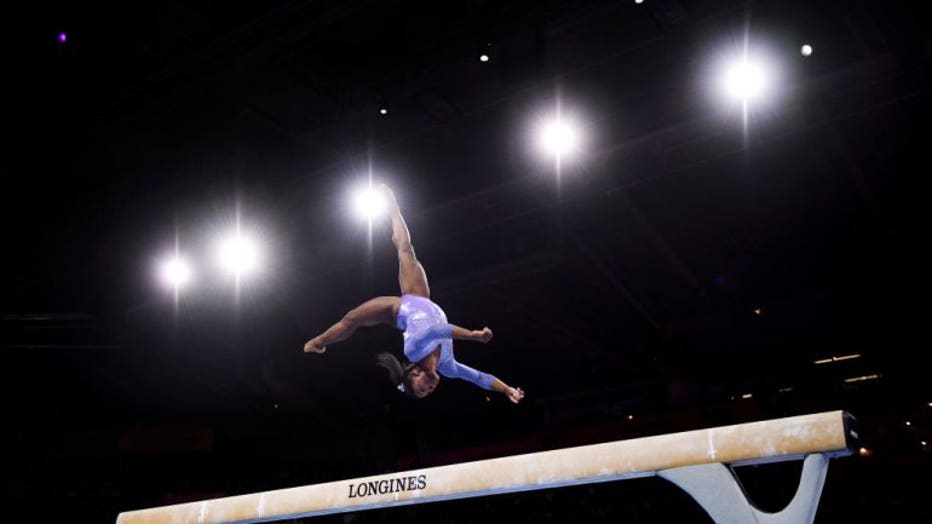 STUTTGART, GERMANY - OCTOBER 13: Simone Biles of USA competes on Balance Beam during the Apparatus Finals on Day 10 of the FIG Artistic Gymnastics World Championships at Hanns Martin Schleyer Hall on October 13, 2019 in Stuttgart, Germany. (Photo by

The stoicism and grace she has shown in becoming an advocate for survivors — herself included — and an agent for change in the wake of the Larry Nassar sexual abuse scandal that’s shaken USA Gymnastics to its core? The byproduct of a conscious decision to embrace the immense clout she carries.

“I realize now with the platform I have it will be powerful if I speak up and speak for what I believe in,” Biles told The Associated Press. “It’s an honor to speak for those that are less fortunate. So if I can be a voice for them in a positive manner, then of course I’m going to do whatever I can.” 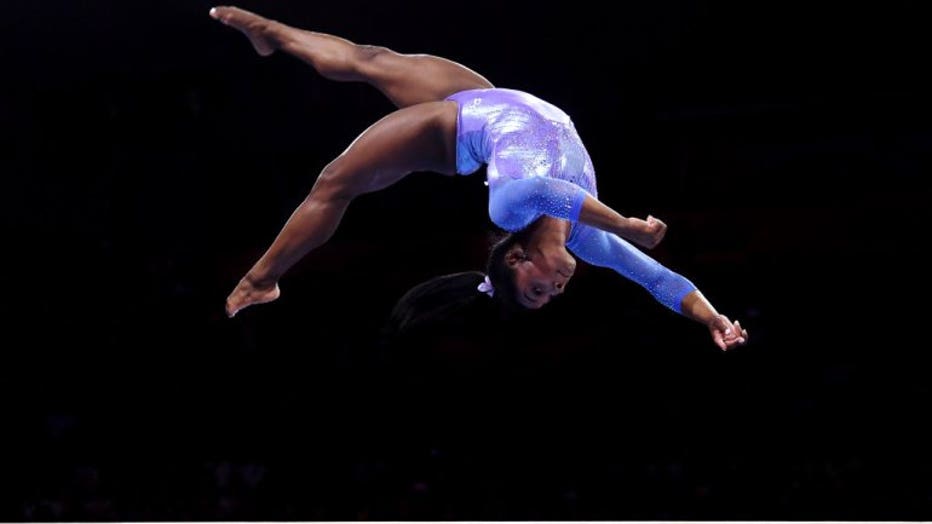 STUTTGART, GERMANY - OCTOBER 13: Simone Biles of USA competes on Balance Beam during the Apparatus Finals on Day 10 of the FIG Artistic Gymnastics World Championships at Hanns Martin Schleyer Hall on October 13, 2019 in Stuttgart, Germany. (Photo by

And it's that mission — combined with her otherworldly skill and boundless charisma — that's enabled Biles to keep gymnastics in the spotlight, a rarity for a sport that typically retreats into the background once the Olympic flame goes out. She is the first gymnast to be named AP Female Athlete of the Year twice and the first to do it in a non-Olympic year.

Biles edged U.S. women's soccer star Megan Rapinoe in a vote by AP member sports editors and AP beat writers. Skiing star Mikaela Schiffrin placed third, with WNBA MVP Elena Della Donne fourth. Biles captured the award in 2016 following a showstopping performance at the Rio de Janeiro Olympics, where she won five medals in all, four of them gold. She spent most of the following 12 months taking a break before returning to the gym in the fall of 2017, saying she owed it to herself to mine the depth of her talent. 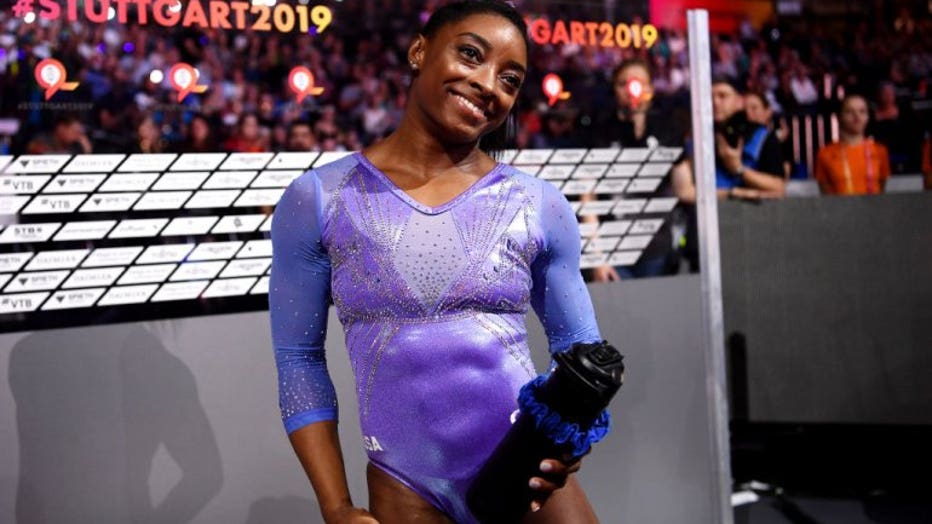 Check social media following one of her routines and you’ll find people -- from LeBron James to Michelle Obama to Chrissy Teigen -- struggling to distill what they’ve witnessed into 280 characters or fewer, with whatever they settle on typically followed by multiple exclamation points and a goat emoji, a nod to Biles being considered the Greatest Of All Time.

This is both the blessing and the curse of making the nearly impossible look tantalizingly attainable. When Biles learned about the FIG's decision, she vented on Twitter, her palpable frustration highlighting the realness she's maintained even as her first name has become synonymous with her sport's royalty.

It can lead to a bit of a balancing act. In some ways, she's still the kid from Texas who just wants to hang out with her boyfriend and her dog and go to the grocery story without being bothered. In other ways, she's trying to be respectful of the world she's built.

Take the GOAT thing. It’s a title she embraces — Biles wore a goat-themed leotard during training at the national championships in August — but also takes with a grain of salt, determined to stay grounded even as the hype around her grows. Yes, GOAT happens to be the acronym for her planned post-Olympic “Gold Over America Tour,” but ask her where the inspiration came from and she laughs and gives credit to a friend, Kevin, who came up it in a group chat. It is both paying tribute to and winking at her status at the same time.

Biles has become well aware over the last three years that her every word and action carries far greater weight than she ever imagined. Her most impactful moment of 2019 might not have come during a meet but sitting for an interview on the eve of winning her record sixth national title, when she fought back tears while talking about how USA Gymnastics, the U.S. Olympic and Paralympic Committee and the FBI failed to protect athletes during an investigation into Nassar's abusive behavior.

The moment went viral, as most things surrounding her tend to do these days.

“I’m starting to realize it’s not just the gymternet anymore,” Biles said, using the term for her sport's dedicated fans. "It’s an overall thing. It’s weird to get that kind of attention, but at the end of the day, I feel gymnastics has been overlooked in non-Olympic years. Yeah, it puts pressure on me. But I’m not trying to think about all the attention from the outside world.”

The attention figures to only grow in the run-up to Tokyo, where she will attempt to become the first female gymnast in more than half a century to repeat as Olympic champion. Her smiling face serves as the exclamation point at the end of every television promo for the Summer Games.

Let it be known: The smile is real. That might not have always been the case, but is is now. Heading into the final months of a singular career, she is trying to revel in the journey while anxiously awaiting what's next. Add it to the list of Simone Things.

“I feel like this is the beginning of my life and I don’t want gymnastics to be my whole entire life,” she said. “I’m definitely going to soak in the moment and enjoy it so 10 years from now I can look back and say ‘I had the time of my life out there’ ... rather than ‘I was good, but I was miserable.’”