MILWAUKEE -- Ryan Braun knew the best night of his career at the plate wouldn't mean much if the Milwaukee Brewers didn't win.

Braun made sure they did with his career-high sixth hit, a two-run single with one out in the 18th that lifted the Brewers to a 4-3 comeback victory over the New York Mets on Saturday night in the longest game in Miller Park history.

Braun stood on first base with his hands raised above his head as Yasmani Grandal slid across home plate with the winning run, ending the game that lasted 5 hours, 22 minutes. A jubilant bunch of Brewers ran out to greet Braun, who was the only Milwaukee player to have multiple hits. 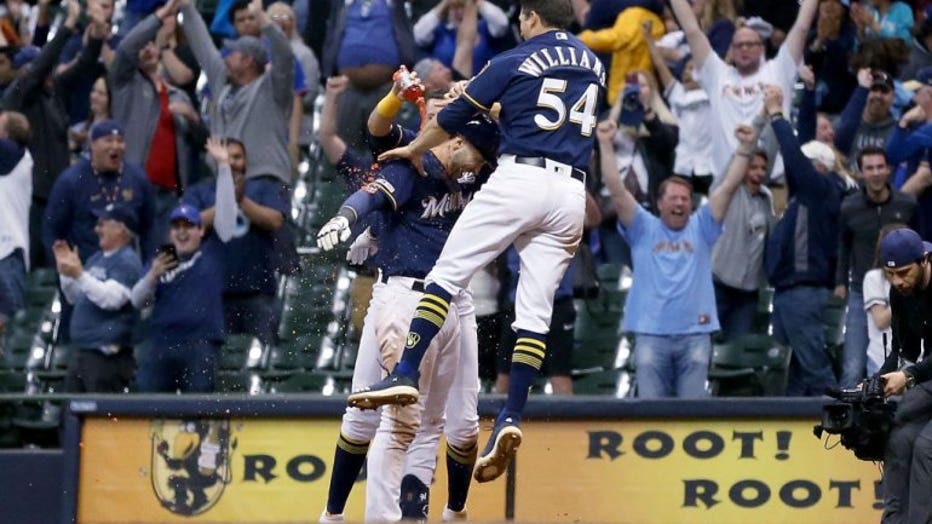 MILWAUKEE, WISCONSIN - MAY 04: Hernan Perez #14, Taylor Williams #54, and Ryan Braun #8 of the Milwaukee Brewers celebrate after Braun hit a single to beat the New York Mets 4-3 in 18 innings at Miller Park on May 04, 2019 in Milwaukee, Wisconsin. (P

"We had 11 hits and one guy had six of them," Brewers manager Craig Counsell said. "That should say everything about how crazy this game was."

The Mets took a 3-2 lead in the top of the 18th on Jeff McNeil's run-scoring single off Taylor Williams (1-1), who was Milwaukee's eighth and final pitcher. McNeil was thrown out at second base for the third out after trying to stretch his hit.

The Brewers — the last major league team to play an extra-inning game this season — were far from done.

Eric Thames then drew a leadoff walk from Chris Flexen (0-2), who got Mike Moustakas to fly out to center. But Flexen, just recalled from Triple-A Syracuse earlier in the day, walked Grandal and Travis Shaw to load the bases for Braun. The Brewers' longest-tenured player hit a sharp grounder past first baseman Pete Alonso and into right field, scoring the tying and winning runs.

"I thought I had a chance to make a play," Alonso said. "The corners were in, so I didn't have much of a reaction time."

Manager Mickey Calloway praised the overall performance of his staff after the Mets (16-17) fell below .500 for the first time this season.

"We threw the ball great," Calloway said. "There at the end, we didn't throw the ball over the plate. You give free passes, you're going to be beat."

Miller Park, which opened in 2001, had two previous 17-inning games, in 2003 and 2015. Both teams used eight pitchers and all of their position players in this one.

Alonso had tied the game in the ninth with a first-pitch, leadoff home run off Brewers reliever Junior Guerra.

"This one really doesn't sit well," Alonso said. "This is a really tough pill to swallow. It was really unfortunate to come up on the short end of this one."

But both teams struggled offensively in the extra innings. The Brewers had a chance to end it in the 17th when Braun led off with a double off Flexen but was stranded.

The Brewers slugger also doubled off Robert Gsellman, the seventh Mets pitcher, with one out in the 14th.

Williams allowed one run and three hits with three strikeouts in four innings to earn the win.

Much earlier in the night, the Brewers got a strong outing from Gio Gonzalez, who made his second start after signing as a free agent on April 27. Gonzalez retired 11 of the last 12 batters he faced. He gave up three hits and one run in 5 1/3 innings, didn't walk a batter and struck out seven.

NL MVP Christian Yelich didn't start for a sixth consecutive game due to lower back discomfort but came on as pinch hitter to lead off the 10th and lined out to center on the first pitch from Seth Lugo.

The Mets got a run in the second on Amed Rosario's run-scoring triple.

The Brewers tied it in the third on Lorenzo Cain's run-scoring single off Zack Wheeler, then took the lead on Moustakas' double, which scored Cain.

Wheeler allowed six hits and two runs in seven innings, and had 10 strikeouts while tying a season high with 111 pitches.

Mets: Placed LHP Luis Avilan on the 10-day injured list with left elbow soreness. Avilan left Friday night's game in the eighth. "We're going to get him to New York and have him evaluated there," Callaway said. Flexen took Avilan's spot. ... INF Jed Lowrie, who has been on the injured list since opening day with a left knee capsule strain, started for Syracuse on Saturday on a rehab assignment. He went hitless in four at-bats.

Brewers: Yelich took batting practice for a second consecutive day. "The guys who have been playing have done a really nice job filling in, but we want (Yelich) in the lineup, for sure," manager Craig Counsell said.

The Brewers played their first extra-inning game of the season, while the Mets played their third. It marked the Brewers' longest game in innings since May 1, 1991, when Milwaukee defeated the Chicago White Sox 10-9 in 19 innings.

The Brewers failed to hit a home run at home for the first time this season. The streak of home runs in 19 consecutive home games ranks as the second-longest streak ever to start a season, trailing only the Toronto Blue Jays, who hit home runs in 21 consecutive games to start the 2000 season.