BOSTON -- The Fenway Funhouse proved too tricky, too cold and just too much for the beach boys.

Andrew Benintendi, J.D. Martinez and the Boston Red Sox came out swinging in the World Series opener, seizing every advantage in their quirky ballpark to beat the Los Angeles Dodgers 8-4 on a chilly, windy Tuesday night.

Benintendi delivered four hits, Martinez drove in two early runs and pinch-hitter Eduardo Nunez golfed a three-run homer to seal it. The 108-win Red Sox got a strong effort from their bullpen after an expected duel between aces Chris Sale and Clayton Kershaw never developed.

From the get-go, Fenway Park caused all sorts of problems for the Dodgers.

Mookie Betts led off for the Red Sox with a popup that twisted first baseman David Freese as he tried to navigate the tight foul space near the stands. Lost, he overran the ball and it dropped behind him.

Given a second chance, Betts lined a single that set up a two-run first inning.

In the seventh, left fielder Joc Pederson looked hesitant as he chased Benintendi's soft fly, rushing toward the seats that jut out down the line. The ball ticked off his glove for a double, and soon Nunez connected to break open a 5-4 game. 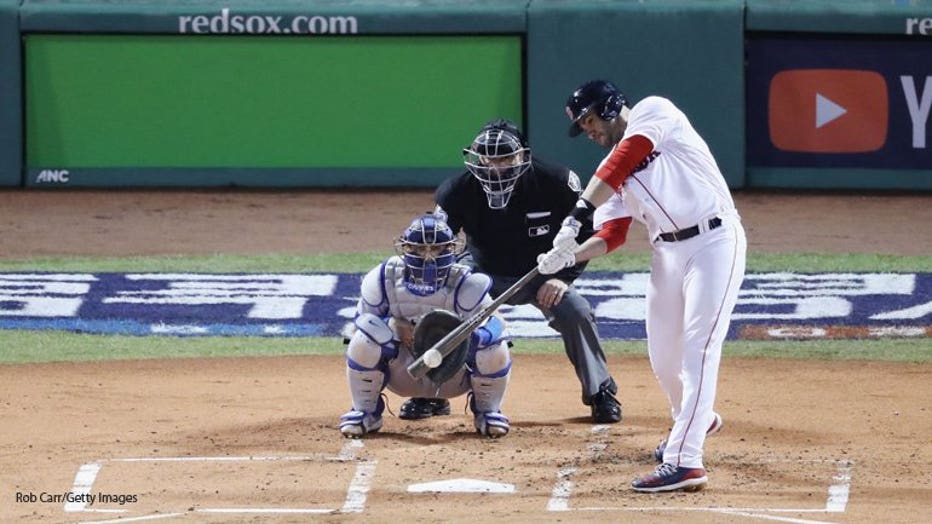 BOSTON, MA - OCTOBER 23: J.D. Martinez #28 of the Boston Red Sox hits an RBI single during the first inning against the Los Angeles Dodgers in Game One of the 2018 World Series at Fenway Park on October 23, 2018 in Boston, Massachusetts. (Photo by Ro

The crowd and cold temperatures were no picnic for the Dodgers, either. 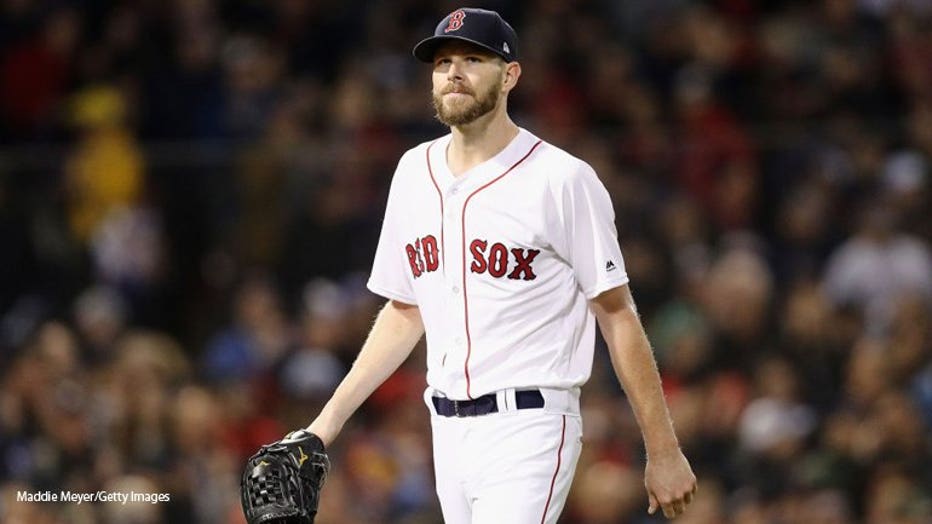 BOSTON, MA - OCTOBER 23: Chris Sale #41 of the Boston Red Sox walks to the dugout after pitching during the second inning against the Los Angeles Dodgers in Game One of the 2018 World Series at Fenway Park on October 23, 2018 in Boston, Massachusetts

Only one person wearing Dodger blue drew a cheer: Manager Dave Roberts, saluted in pregame introductions for the daring steal that turned the tide in Boston's 2004 playoff comeback against the Yankees.

It was 53 degrees for the first pitch, the coldest game for Los Angeles this year and quite a contrast from last year's World Series, when it was a record 103 degrees for the opener at Dodger Stadium.

Game 2 is Wednesday night, when it's supposed to be even colder. David Price, fresh from beating Houston in the ALCS clincher, starts against Hyun-Jin Ryu.