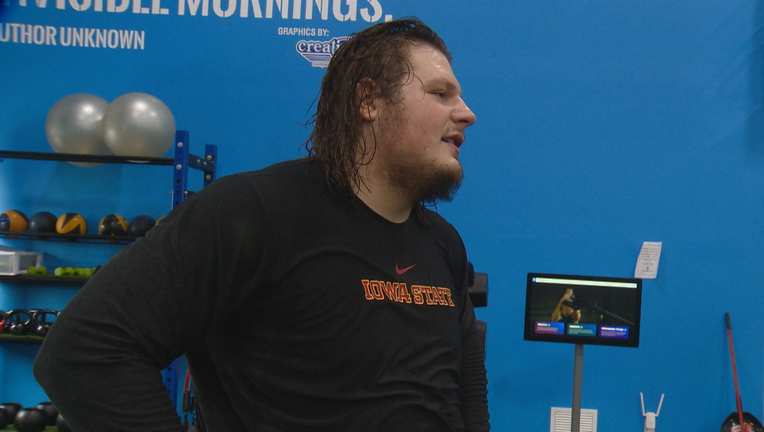 GREEN BAY, Wis. - Derek Schweiger, like a lot of football players this time of year, is hitting the gym hard.

"It's been a really good experience," said Schweiger. "I mean, to be with other guys that are in kind of in the same position as you, working their way to become better at what they do, better at their craft."

Most days, you can find the Plymouth native at Synergy Sports in Green Bay.

"I'm pretty decent where I'm at, where I want to be," Schweiger said. "But you can always grow and get better. So if I can get a little extra juice and a little adrenaline and get a few more bench reps or the higher jumps, further jumps or a little faster times, can't really complain with that."

Five years ago, Schweiger had no idea where football would take him.

A three-year starter with the Panthers and First Team All-Conference honors his senior year, Schweiger went to Iowa State in hopes of walking on.

"I started as a walk-on, really just kept working my way to be trusted by the coaches and my teammates," said Schweiger. "And [I] got on the field and made an impact and started two years. And last year, I moved out to tackle because the team needed me to. So I had to do what was necessary and had a really good season."

After playing just three games in his first three years, Schweiger became a starter for the Cyclones.

He transformed himself into a team captain, garnering All-Big 12 Second Team honors.

Just as his future was an unknown in 2017, the same can be said today as he puts in the work to become an NFL player.

"Growing up, it's always a dream to - you watch the Green Bay Packers growing up your entire life, and it's a dream to play on the biggest stage," Schweiger said. "Just working and finding a deeper love for the game and things like that just really makes you want to continue and become the best you can be at the highest level, which is the NFL."

Although Schweiger moved to tackle his final season in Ames, Iowa, he sees himself as a guard or center.

He also sees himself looking for a team after the draft is finished.

"Late to undrafted is what I've heard, but I really only need one opportunity," said Schweiger. "Just give me that shot. Let me show what I can do and see what kind of player I am. It's kind of my mentality going into it."

Mentally, Schweiger is prepared for anything.

But he knows what he is worth.

"It's one of those things where I know what I can do," Schweiger said. "I know the impact I can have on a team. I know the qualities that I bring to a team once I'm on it and whatever happens, happens and you just kind of roll with it and keep working."

A car and an MCTS bus crashed at Locust Street and Dr. Martin Luther King Drive on Wednesday. MCTS said the car ran a red light, hitting the bus.