GREEN BAY -- It is Week 3 of the NFL regular season -- and the Green Bay Packers are back home this Sunday, September 25th to face the division rival Detroit Lions at Lambeau Field.

Heading into this matchup, the Packers are coming off a tough loss vs. Minnesota. The game was played Sunday, September 18th at the Vikings' brand new US Bank Stadium. The Packers lost to the division rivals 17-14 and are 1-1 on the season.

Pass-rushing linebacker Clay Matthews wouldn't be on the field for this matchup due to ankle and hamstring injuries.


The Packers downgraded Matthews' status for the home opener from questionable to out after practice Saturday. Matthews didn't practice all week.

Green Bay would also be without Morgan Burnett after the starting safety was ruled out on Saturday with a groin injury.

Top cornerback Sam Shields was ruled out for a second straight game with a concussion.


As play got underway at Lambeau Field, the Detroit Lions won the coin toss and deferred. The Packers would then receive. Packers wide receivers Ty Montgomery and Trevor Davis were back to receive the opening kickoff.

Packers tight end Jared Cook was able to earn a first down on a 15-yard catch off a slant on third down as play got underway.

The first Packers touchdown came early in this matchup with a pass from Aaron Rodgers to wide receiver Davante Adams. With the extra point after this 14-yard TD, the score was then 7-0. 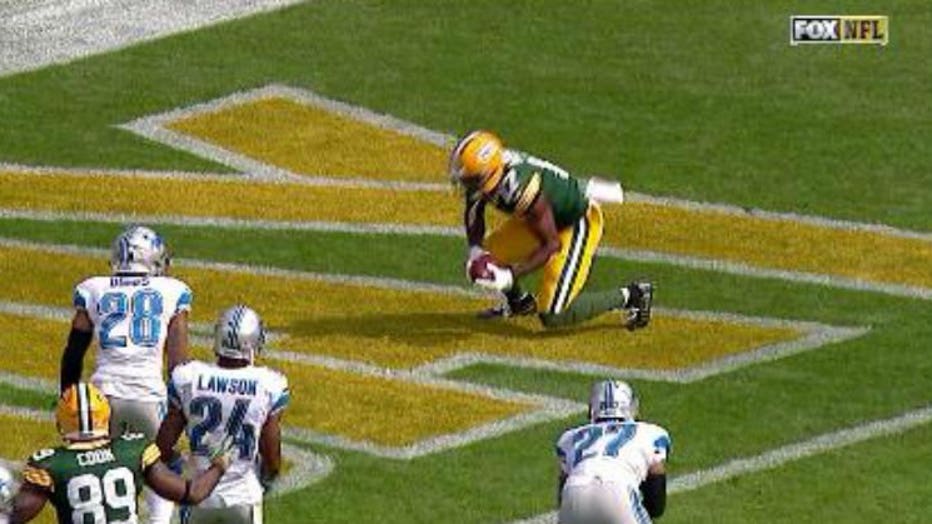 Aaron Rodgers to Davante Adams for touchdown vs. Lions

Following this touchdown, we saw the first Lambeau Leap of the season at Lambeau Field -- with Davante Adams jumping into the stands.

Packers outside linebacker Julius Peppers was able to blast into the backfield to stop a run by Lions running back Theo Riddick during their first possession after that Adams TD. Packers Nick Perry was able to tackle Riddick for a six-yard loss.

The Packers defense was able to get a pair of three-yard tackles for loss, to force a 42-yard field goal by Lions placekicker Matt Prater.

The score was then 7-3, with Green Bay leading.

Packers QB Aaron Rodgers was able to hit Jordy Nelson across the middle for a 49-yard completion. It was then Packers first down at the Detroit 11 yard line.

The Packers second TD this game came via an Aaron Rodgers to Jordy Nelson pass for an eight-yard TD! Following the extra point, the Packers led the Lions 14-3. 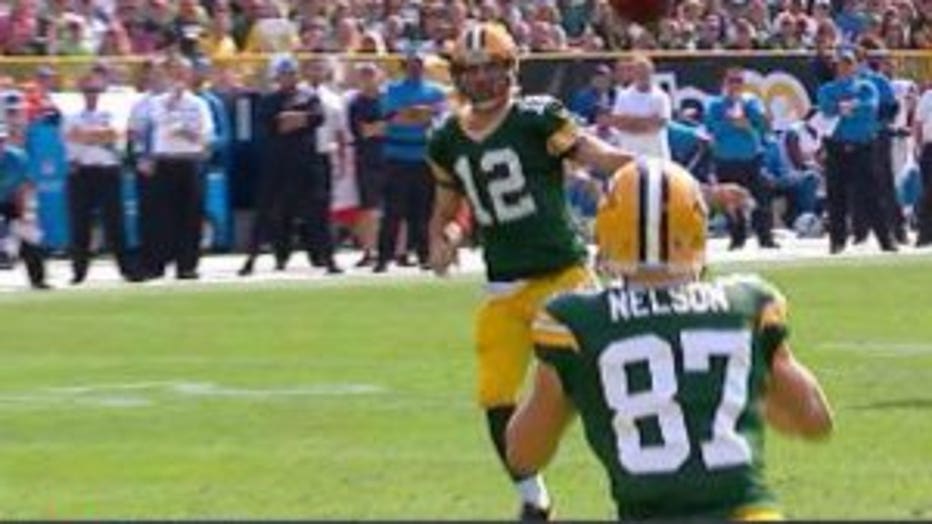 Aaron Rodgers to Jordy Nelson for the TD vs. the Lions

The Packers defense was then able to force a three-and-out, and Packers wide receiver Trevor Davis was back to receive the punt.

The Packers led the Lions 14-3 as the first quarter came to an end.

CLICK HERE for a first quarter recap via Packers.com.

Aaron Rodgers and Trevor Davis were able to draw a deep defensive pass interference penalty on Lions cornerback Nevin Lawson -- and then, Rodgers threw his third TD pass in 15 minutes and 14 seconds! It was Richard Rodgers with the touchdown -- and Green Bay then led the Lions 21-3!

The Packers scoring drive included two plays in :47 for 67 yards gained. The drive began at the Green Bay 33 yard line. 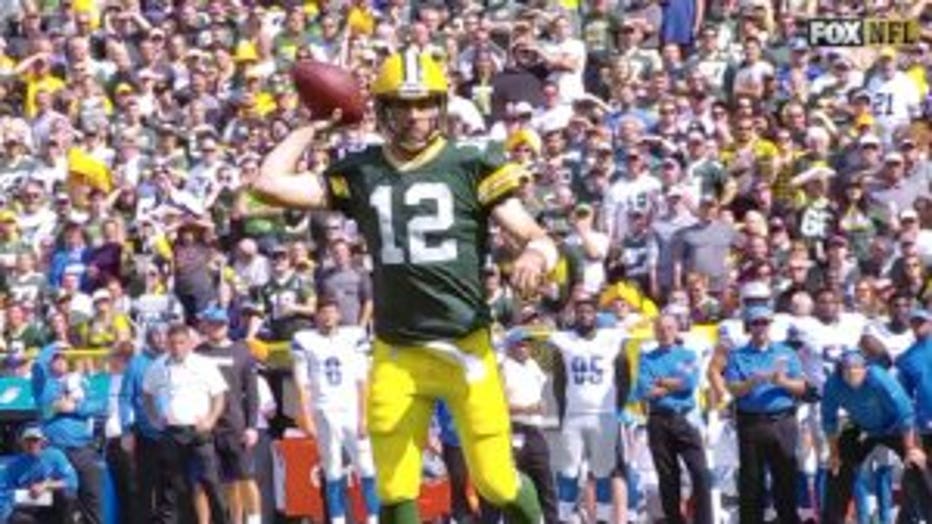 Packers cornerback Damarious Randall was able to take the ball away from Lions TE Eric Ebron for a 44-yard interception return.

Packers kicker Mason Crosby was able to successfully complete a 36-yard field goal to put the Packers ahead 24-3 with 10:41 left in the first half. 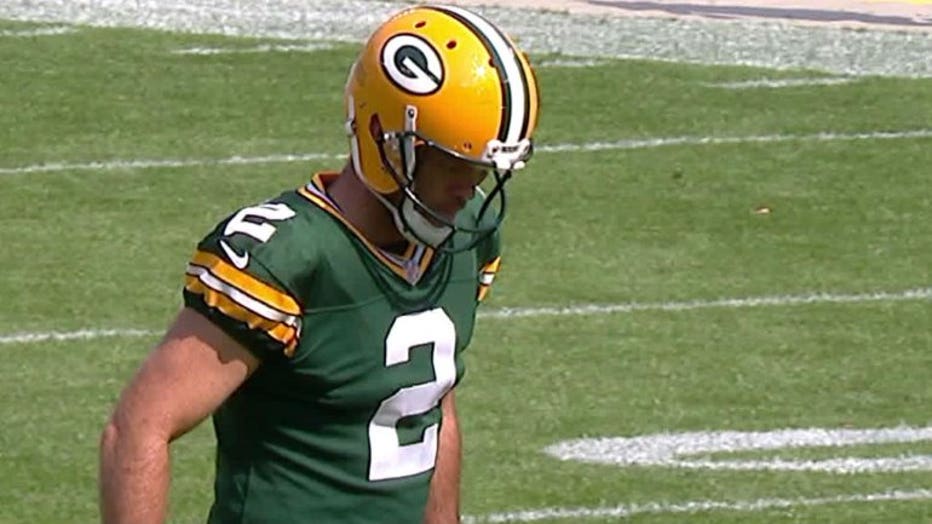 The Packers scoring drive included four plays in :59 for seven yards gained. The drive began on the Detroit 25 yard line.

Packers officials in the second quarter announced tight end Jared Cook was questionable to return to this game with an ankle injury.

Packers outside linebacker Jay Elliott was able to take down Golden Tate in the backfield for an eight-yard loss on the reversal during Detroit's next possession.

Lions placekicker Matt Prater tried a 43-yard field goal -- and that attempt was NO GOOD.

The Packers then took over at their own 33 yard line -- leading Detroit 24-3.

The Packers announced linebacker Blake Martinez was getting stitches to his nose in the locker room. Packers officials said he was expected to return to the game.

Packers running back Eddie Lacy was able to make a 25-yard carry to the Detroit 37 yard line leading up to the two-minute warning ahead of halftime.

An Aaron Rodgers pass to Jordy Nelson in the end zone meant a 17-yard TOUCHDOWN for the Packers! With the extra point, the Packers then led the Lions 31-3 with 1:10 left in the first half. 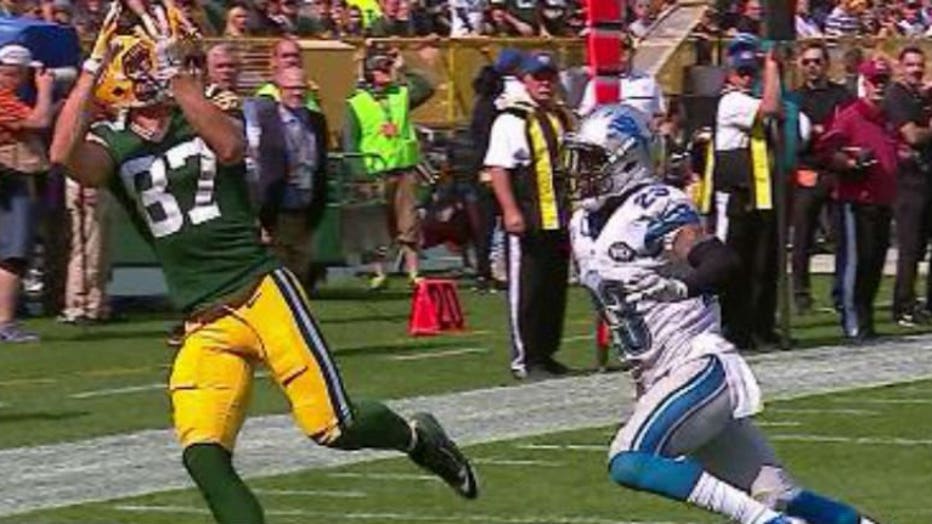 Rodgers to Nelson for TD vs. the Lions

According to the Packers, this meant six receptions for 101 yards and two touchdowns for Jordy Nelson this game.

The Packers scoring drive included seven plays in 3:53 for 67 yards gained. The drive began on the Green Bay 33 yard line.

The Lions responded with a 73-yard TD pass from Lions QB Matthew Stafford to TJ Jones. It was then 31-10 with the Packers leading, with 32 seconds left in the first half.

As the second half got underway, the Detroit Lions started with the ball.

Packers DE Mike Daniels was able to power through to stop Lions running back Dwayne Washington for a one-yard loss on third-and-goal from the Green Bay one yard line.

The Packers in the third quarter announced 78,411 were on hand to watch the Packers take on the Lions at Lambeau:

Packers officials also announced Jared Cook would not be returning to the game with that ankle injury, and Packers fullback Aaron Ripkowski was out with a back injury.

The Packers next score came in the form of a Mason Crosby 46-yard field goal, putting the Packers ahead 34-17 with 3:14 left in the third quarter.

The Packers scoring drive included nine plays in 5:09 for a total of 47 yards gained. The drive began on the Packers 25 yard line.

The Packers led the Lions 34-17 as the third quarter came to an end.

Packers Nick Perry was able to sack Detroit QB Matthew Stafford for an eight-yard loss on third down.

Detroit kicker Matt Prater was able to successfully complete a 50-yard field goal, bringing the score to Packers 34, Lions 20 with 12:32 left in the game.

Packers outside linebacker Jay Elliott was able to tackle Lions wide receiver Andrew Roberts for a one-yard gain after Packers punter Jake Schum's 40-yard punt. It was then Detroit's ball at their own 13 yard line.

Packers Nick Perry and Kyler Fackrell each got a sack to force a Lions punt.

After a 43-yard punt from Packers Jake Schum, the Lions took over at their own 38 yard line with 5:05 left in the game.

Marvin Jones was able to catch a 35-yard touchdown pass from Lions QB Matthew Stafford, and Detroit cut its deficit to 34-27.

Packers running back Eddie Lacy was able to power ahead for nine yards and a first down -- putting him over 100 yards rushing on the day.

This, just ahead of the two-minute warning at Lambeau Field.

CLICK HERE for a recap of the Packers victory over the Lions at Lambeau Field.

The Packers have a bye next week, before an October 9th matchup vs. the New York Giants at Lambeau Field.

Monitor FOX6Now.com for updates throughout the game.