GREEN BAY -- The offensive line kept QB Aaron Rodgers upright, the two-time MVP threw for 235 yards and a touchdown, and Aaron Jones tied a career high by running for two scores to lead the Green Bay Packers to a 27-16 victory over the Denver Broncos on Sunday, Sept. 22. The Packers were hopeful they could end the month of September with a perfect record as they geared up to take on the Philadelphia Eagles at Lambeau Field Thursday, Sept. 26.

FOX6's Tim Van Vooren went Inside the Huddle with LB Blake Martinez to talk about the great start of the team and defense.

"Yeah, I mean, it was a special game," said Martinez. " I think we'll kind of look back and see a lot of things to correct, but overall, we made the plays that we needed to to get the win." 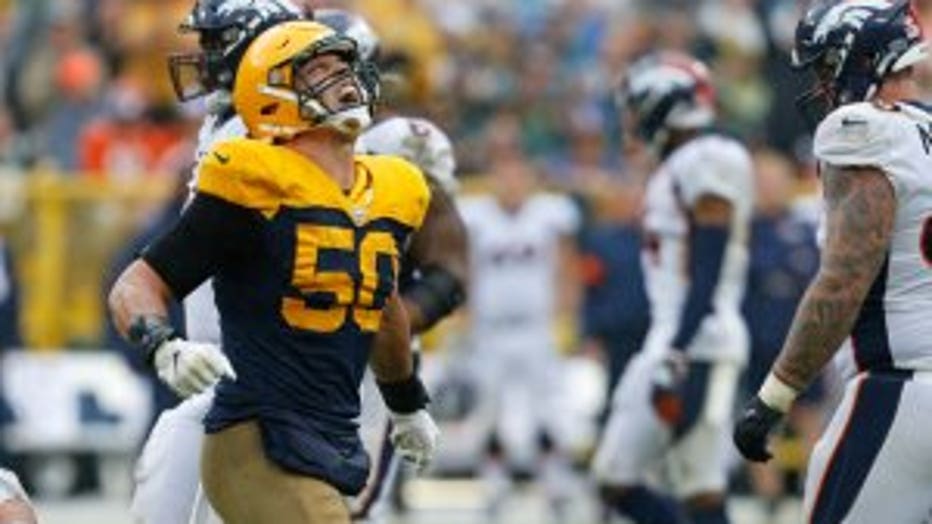 GREEN BAY, WISCONSIN - SEPTEMBER 22: Blake Martinez #50 of the Green Bay Packers reacts after tackling Phillip Lindsay #30 of the Denver Broncos during the second half at Lambeau Field on September 22, 2019 in Green Bay, Wisconsin. (Photo by Nuccio D

FOX6's Tim Van Vooren: "Let's start with the positive. 3-0 for the team, and the defense, which was expected to be good, is good again for the third straight week. You get that penetration, you get some takeaways. Is this the formula you guys want to follow?"

"Oh, yeah," said Martinez. "It's kind of been something that we've talked about since we got here in OTAs. Working on getting the ball out. Working on getting big plays in the backfield. Setting up rush stuff for Preston, Zadarius. I think they have five sacks combined, so just those types of things, and having perfect coverage, perfect guys in the right windows, everyone doing their job, and things happen.

"No, it's one of the things that, kind of, I went through this off-season, things I want to correct, kind of going from last year, I kind of called my rookie season, and Pettine's defense," said Martinez. "So it's just kind of one of those things. I just want to keep getting better every day."

FOX6's Tim Van Vooren: "Well, I know you love football, Blake, since the time you were drafted here, and way before that, but that's when we first got to know you, but this team really seems to love what's going on here. I don't want to compare, necessarily, to the past, but what would you say about just, kind of, the emotional vibe you guys are on right now." 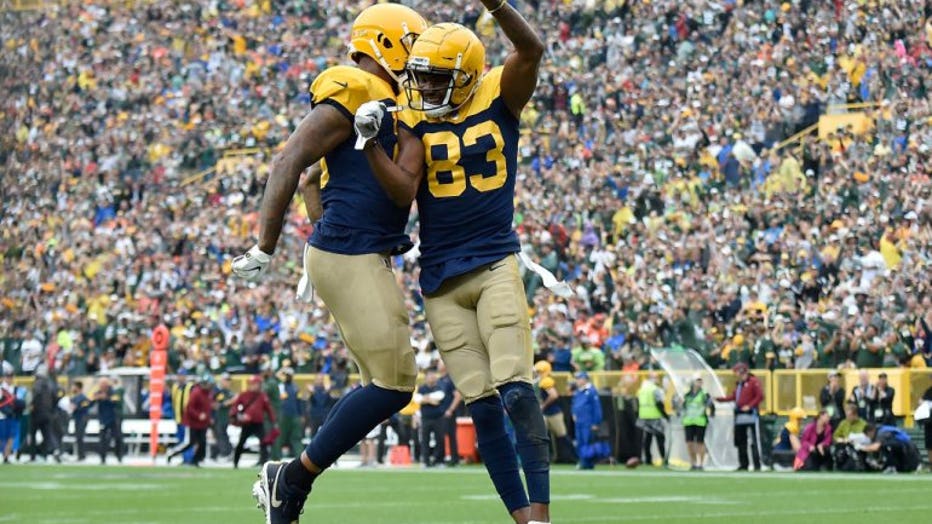 GREEN BAY, WISCONSIN - SEPTEMBER 22: Marquez Valdes-Scantling #83 of the Green Bay Packers score a touchdown in the first quarter against Kareem Jackson #22 of the Denver Broncos at Lambeau Field on September 22, 2019 in Green Bay, Wisconsin. (Photo GREEN BAY, WISCONSIN - SEPTEMBER 22: Phillip Lindsay #30 of the Denver Broncos is brought down by Preston Smith #91 of the Green Bay Packers and Blake Martinez #50 during the second half at Lambeau Field on September 22, 2019 in Green Bay, Wisconsin. 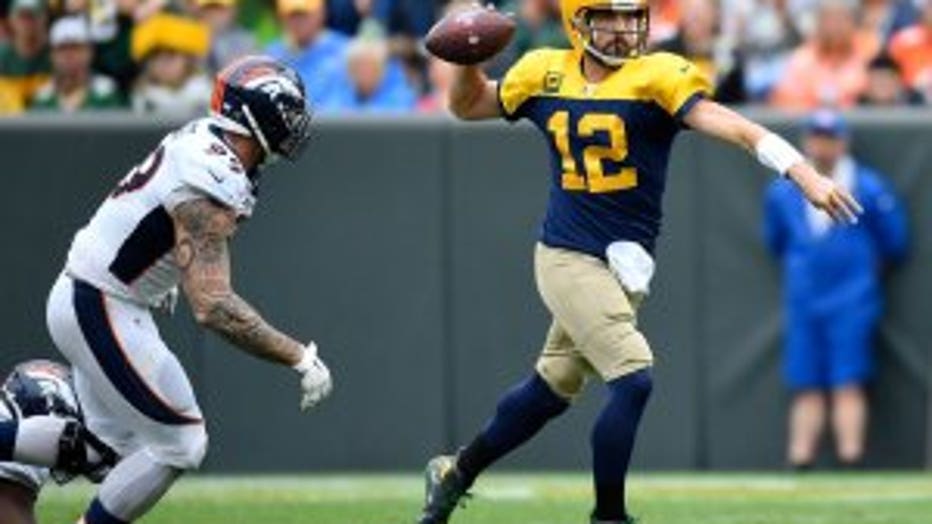 GREEN BAY, WISCONSIN - SEPTEMBER 22: Aaron Rodgers #12 of the Green Bay Packers looks to pass as Adam Gotsis #99 of the Denver Broncos pursues in the first quarter at Lambeau Field on September 22, 2019 in Green Bay, Wisconsin. (Photo by Quinn Harris

"No, yeah, it's special," said Martinez. "I think the culture we're kind of building here is something amazing. I think the new guys coming in, the free agencies, the first-round draft picks, every single person is a professional. Every single person wants to be the best. They don't want to let each other down. So every single time we step on the field, we're testing each other to be the best, and it's just making us better every day."

FOX6's Tim Van Vooren: "Some of those young guys you talked about with the picks, Darnell Savage with an interception today, Rashawn Gary with the fumble recovery, and the veterans, and the offensive guys seemed like, hey, they're patting you guys right on the back, too. This is a 53-man operation. From appearances, does it feel that way?"

"Oh yeah, 100%," said Martinez. "I think it's one of the things that we're keeping, keep working towards, being that full team, whether it's special teams, defense, offense, every single person, no matter what situation we're in, whether offense has some bad play, defense comes in, and we stop them. Or defense has a bad situation, offense comes in, scores a couple touchdowns to kind of, ease the momentum, or special teams needed a big punt. JK's punting, booting it, literally, to the moon. So just those types of things that all of us are working really well together." 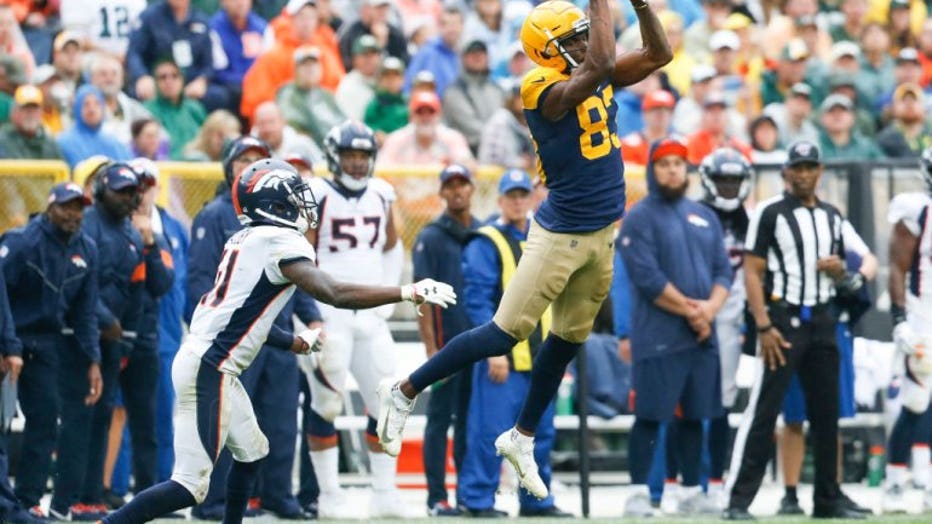 GREEN BAY, WISCONSIN - SEPTEMBER 22: Marquez Valdes-Scantling #83 of the Green Bay Packers makes a catch in front of DeVante Bausby #41 of the Denver Broncos during the second half at Lambeau Field on September 22, 2019 in Green Bay, Wisconsin. (Phot