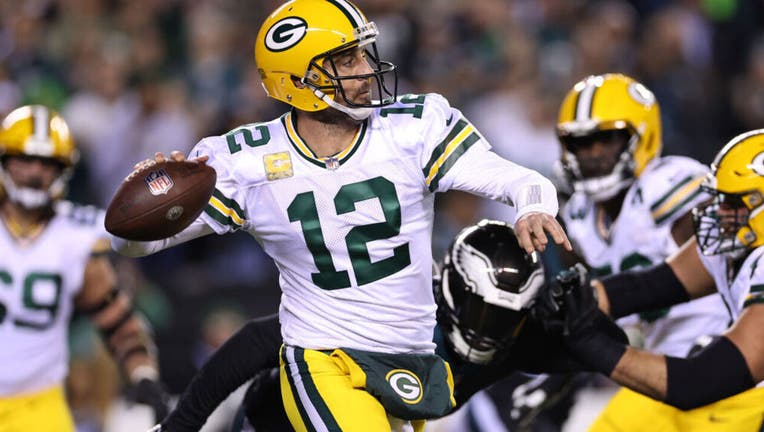 PHILADELPHIA - Jalen Hurts ran for 157 yards to set an Eagles record for a quarterback, and Packers QB Aaron Rodgers suffered an oblique injury in Philadelphia’s 40-33 victory over Green Bay on Sunday night.

Hurts also threw for 153 yards and two touchdowns for the NFC-best Eagles, who moved to 10-1 for the fifth time in history. Miles Sanders ran for 143 yards and two scores as Philadelphia rushed for 363 overall, the second-best total for the franchise.

Rodgers left in the third quarter with his team trailing 34-23 after grimacing his way through a drive that led to a Packers' field goal. He had already been playing with a broken thumb and took several hard hits. 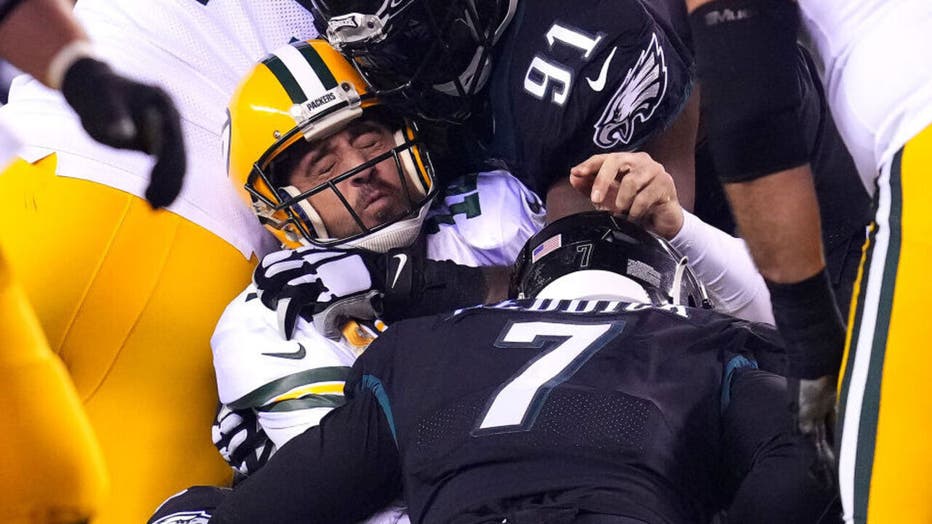 Rodgers’ replacement, Jordan Love, kept the Packers (4-8) in the game by connecting with Christian Watson for a 63-yard catch-and-run touchdown that cut Philly’s lead to 37-30.

But the Packers ran out of time against Hurts, who seems poised to take the torch from Rodgers as the next MVP.

In the second half, he hit A.J. Brown for a 6-yard TD pass and a 34-20 lead that just added to his staggering numbers on one of the great nights ever for an Eagles QB. Hurts topped Michael Vick’s 130 yards rushing set in December 2010 against the New York Giants.

Rodgers was 11 of 16 passing for 140 yards, two touchdowns and two first-half interceptions.

Hurts put on a show in a lively first half that saw two Eagles get their first career picks and both teams miss an extra point while combining for seven touchdowns. 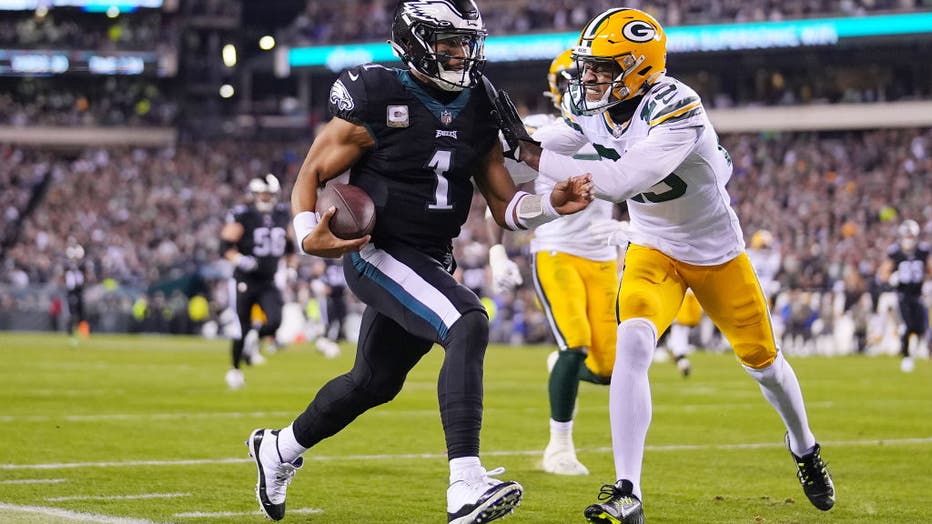 Bettors could have cashed in on the over in the first 30 minutes.

Philadelphia’s high-octane offense had slowed of late — notably during the first loss of the season in the previous home game against Washington and last week’s win over Indianapolis that needed a fourth-quarter rally — but Hurts put the Packers on notice with early rushes that would make an All-Pro running back envious. He ran for 52 yards on the opening drive and set up Kenneth Gainwell’s 4-yard TD.

Then the game got wild. Rodgers had his second pass attempt batted by cornerback Darius Slay and snagged by Josiah Scott for his first career pick. Three plays later, Sanders scored on a 15-yard run. But Jake Elliott missed the PAT.

Rodgers led the Pack right back. A.J. Dillon scored on a 20-yard run, Rodgers hit Randall Cobb for an 11-yard score, and it was 14-13 late in the first quarter. 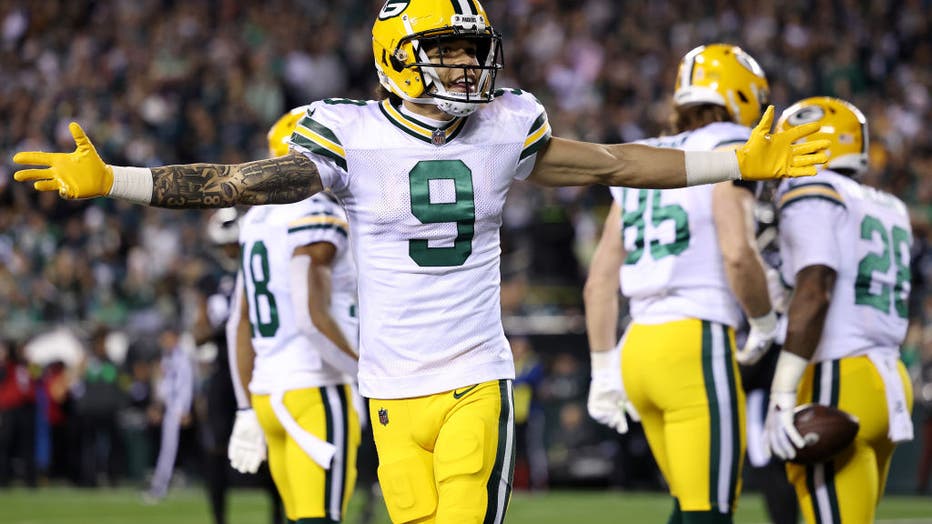 Hurts, though, closed the half with a 42-yard run and a 1-yard run, close enough to the end zone to set up Sanders’ 2-yard scoring run on the first play of the second quarter.

Rodgers again came back and threw a 23-yard TD pass to Aaron Jones. Mason Crosby matched Elliott with a missed extra point and it was 20-20.

That was about all Rodgers could muster.

Hurts took it from there threw a 30-yard TD pass to Quez Watkins — whose fumble against the Commanders played a pivotal role in the Eagles’ lone defeat.

Jalen Hurts ran for 24 and 27 yards during the Eagles' opening drive which resulted in a touchdown. Philadelphia led 7-0 with the extra point with 11:19 remaining in the first quarter.

During Green Bay's first drive, Aaron Rodgers escaped a sack, but a pass went off the head of Eagles' CB Darius Slay and Rodgers was picked by Josiah Scott.

Philadelphia scored again, courtesy Miles Sanders. The touchdown brought the score to 13-0 with about 9 minutes remaining in the first.

The Packers' offense responded with a touchdown courtesy AJ Dillon via a 20-yard run. The TD and extra point brought the score to 13-7.

A Rodgers to Randall Cobb touchdown pass added 6 for the Packers. Mason Crosby's extra point put Green Bay in the lead 14-13 with about 3 minutes left in the first.

During the Eagles' next possession, Jalen Hurts took off again, running for 41 yards, making for over 100 rushing yards in the first quarter.

A Miles Sanders' touchdown put Philadelphia back in the lead early in the second quarter, 20-14.

Aaron Rodgers was intercepted again, this time by Reed Blankenship.

The Eagles fumbled as Rudy Ford stripped the ball away, and Quay Walker recovered, leading to a 63-yard fumble return. Rodgers fired into the end zone to Aaron Jones for the touchdown. Crosby's extra point attempt was no good, and the game was tied at 20 with 7:41 left in the first half.

The Eagles added a touchdown just before halftime to take the lead once again, 27-20.

Starting the second half, Packers' Keisean Nixon had the longest kick return for Green Bay this season for 52 yards. Unfortunately, the Packers' offense ended up going 3 and out.

The Eagles were the first to score in the second half via a reception by AJ Brown. It brought the score to 34-20 with just over 7 minutes left in the third.

The Packers cut Philly's lead to 34-23 with a Mason Crosby 29-yard field goal.

Aaron Rodgers appeared to be in a fair amount of pain in the third quarter; the broadcast showed him pointing to his ribs and grimacing. This, in addition to his broken thumb on this throwing hand. The Packers said he suffered an oblique injury and was questionable to return.

A 31-yard Eagles' field goal made this a 14-point game with just over 11 minutes left in the fourth quarter; Philly leading 37-23.

It was then Jordan Love time.

Love connected with Christian Watson who ran for the touchdown, his sixth in the last three games. Crosby's extra point was good, cutting the Eagles' lead to 37-30.

Love had a couple shots into the end zone, but they were incomplete. Mason Crosby's 33-yard field goal made it 40-33 Eagles, the final score.