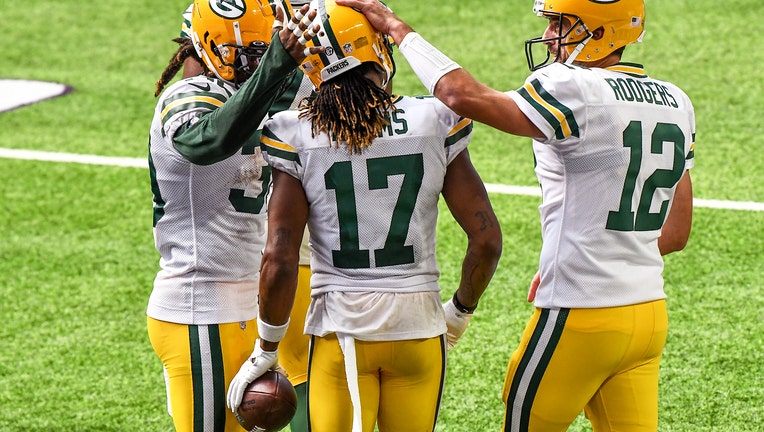 Davante Adams is congratulated on his 3rd quarter 1-yard touchdown reception against the Vikings. (Photo by Nick Wosika/Icon Sportswire via Getty Images)

Adams hasn’t practiced this week since leaving the Packers’ 42-21 victory over the Detroit Lions in the second half. LaFleur has said there’s a possibility Adams could play even without practicing all week if the three-time Pro Bowl selection feels fine on Sunday.

“We’ll give him the rest of the week to see where he’s at, but ultimately we’ve got to see if he’s able to go,” LaFleur said Friday. “I know he’s doing everything in his power to make that happen, but I’d say right now he’s probably doubtful.”

Adams has 17 catches for 192 yards and two touchdowns this season. He caught 14 passes in a season-opening victory at Minnesota to tie Don Hutson’s 78-year-old franchise record for receptions in a game.

The status of defensive tackle Kenny Clark also remains uncertain after he missed the Lions game with a groin injury. Clark has practiced some this week.

“He’s made progress, there’s no doubt,” LaFleur said. “He’s definitely not 100% yet. Again, he’s another guy we’re going to give up until game time and we’ll have to determine whether or not he can go.”