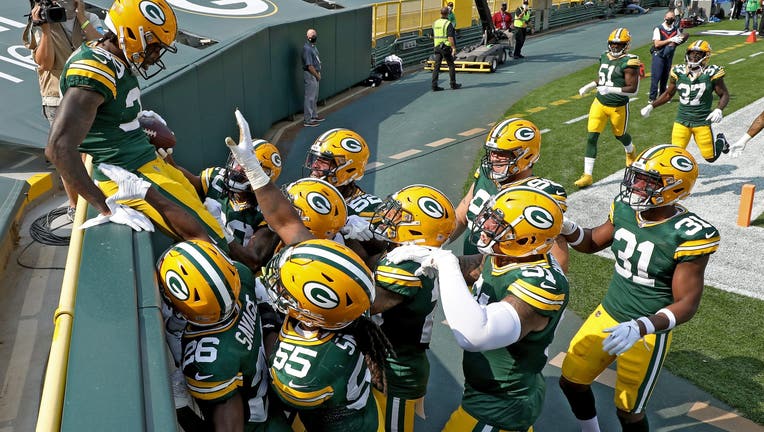 GREEN BAY, WISCONSIN - SEPTEMBER 20: Chandon Sullivan #39 of the Green Bay Packers celebrates with teammates after scoring a touchdown in the third quarter against the Detroit Lions at Lambeau Field on September 20, 2020 in Green Bay, Wisconsin. (Pho

GREEN BAY, Wis. - Aaron Jones rushed for a career-high 168 yards and scored three touchdowns, including a 75-yard breakaway, as the Green Bay Packers rallied from an early 11-point deficit to beat the Detroit Lions 42-21 on Sunday.

Jones also had a team-high 68 yards receiving on four catches as the Packers won their home opener for an eighth consecutive year. Jones had a 14-yard touchdown run and a 7-yard touchdown catch to go along with his 75-yarder.

Aaron Rodgers was 18 of 30 for 240 yards with touchdown passes to Jones and Robert Tonyan.

See complete box score of the game on FOXSports.com

One week after blowing a 17-point, fourth-quarter lead in a 27-23 loss to the Chicago Bears, the Lions allowed an 11-point advantage to vanish by halftime as they fell for the 11th consecutive time.

Green Bay took the lead for good 17-14 on Rodgers’ 11-yard pass to Tonyan with 14 seconds left in the second quarter. Jones then raced through a hole on the right side and scored on the Packers’ first play from scrimmage in the second half.

Jones’ 75-yard burst was the longest touchdown run by a Packer since Ahman Green had a 90-yarder against Dallas in 2004.

The Packers extended the lead to 31-14 later in the third quarter when Rashan Gary pressured Matthew Stafford into throwing an interception that Chandon Sullivan returned for a 7-yard touchdown. Sullivan fell to the ground before crossing the goal line but got back up and reached the end zone. 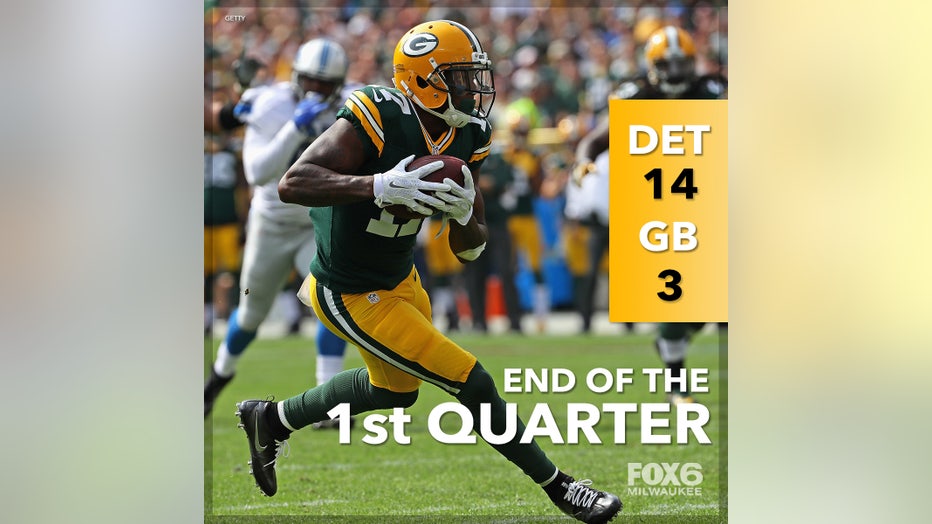 Detroit was playing without several key players due to injury but took an early 14-3 lead by scoring touchdowns on its first two possessions. Kerryon Johnson capped the first series with a 1-yard run. Detroit’s second drive ended with Matthew Stafford’s 4-yard touchdown pass to Marvin Jones.

That gave Stafford 35 career touchdown passes against the Packers, the most by any Green Bay opponent. He would increase that total to 36 by throwing a 24-yarder to Marvin Hall in the fourth quarter.

Stafford went 20 of 33 for 244 yards with two touchdowns and an interception. Stafford has thrown for 5,430 career yards against the Packers to lead all Green Bay foes.

At that point, Green Bay had given up touchdown drives on five straight series – the last three possessions of a victory at Minnesota last week and the first two drives of this game. But after giving up 150 yards on Detroit’s first two series, Green Bay’s defense stiffened the rest of the way. 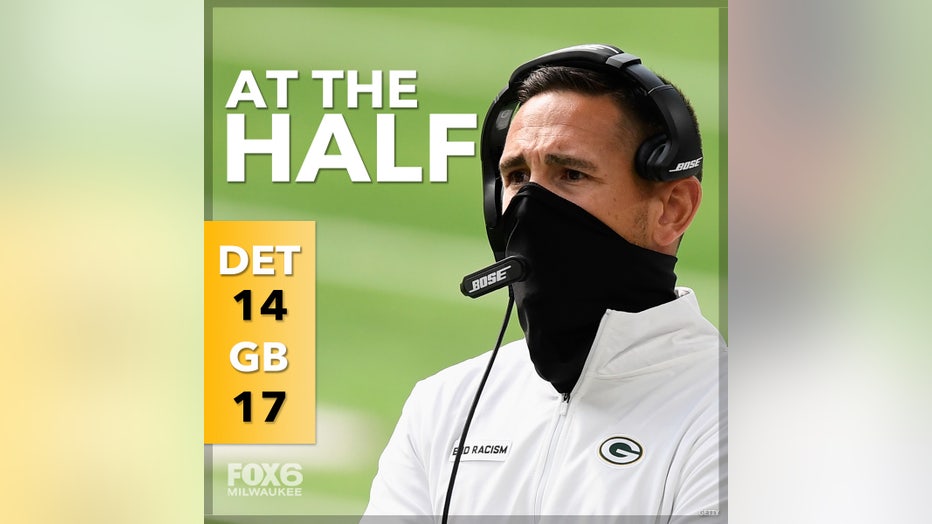 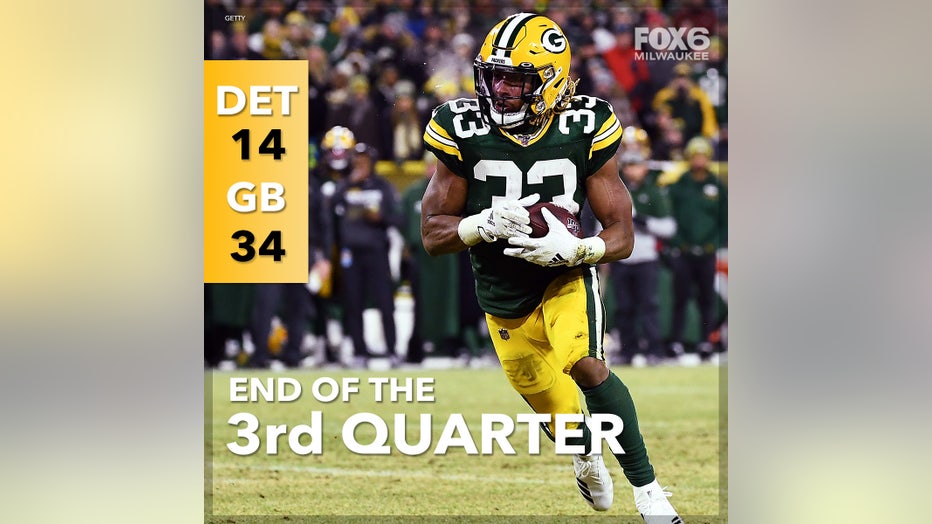 Jones did the Packers’ first Lambeau leap of the season, even though he didn’t get to share the experience with any fans.

With no fans at Lambeau Field due to the pandemic, green tarps were placed over the first several rows in the stands. Some of the tarps featured Packers logos or slogans, while others had advertising.

After scoring on a 7-yard reception early in the second quarter, Jones leaped onto one of the curtains to celebrate.

Earlier in the game, Johnson had done his own version of a Lambeau leap as he leaned into a tarp and gave out high-fives to the air after scoring on a 1-yard run for Detroit. 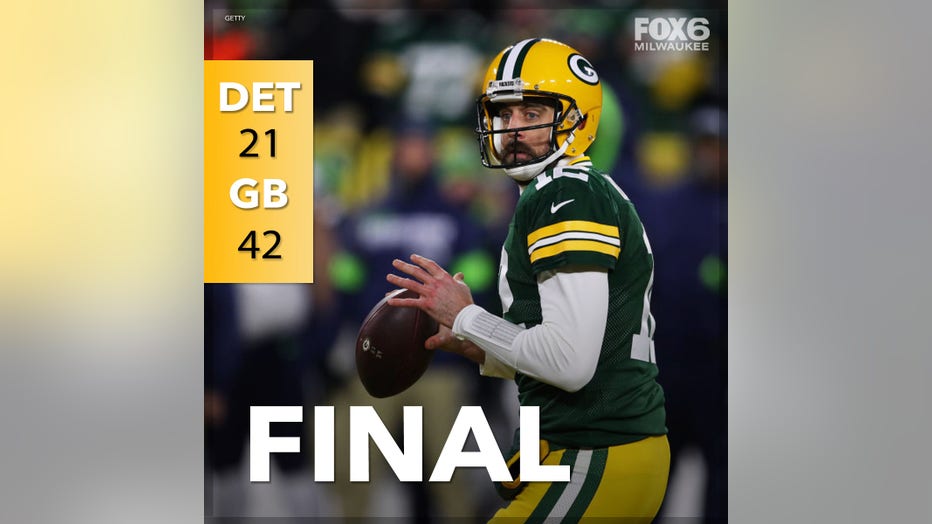 Packers: travel to New Orleans for a Sunday night game.