Hornibrook finished 9 of 19 for 143 yards, but bounced back from an interception early in the third quarter with some of his best throws of the season.

He connected with Taylor through a tight window in the end zone for a 14-10 lead with 3:31 left in the third quarter.

After a three-and-out for Michigan, Wisconsin's Danny Davis made a one-handed catch with a defender draped on him for a 27-yard gain. Pryor followed with his 32-yard scoring run with 24 seconds left in the third for a two-score lead.

It took a while for the offense to get going. The defense stood firm most of the day.

Linebacker Leon Jacobs forced Michigan quarterback Brandon Peters to fumble at the Wisconsin 2 in the second quarter. The pressure picked up in the second half. 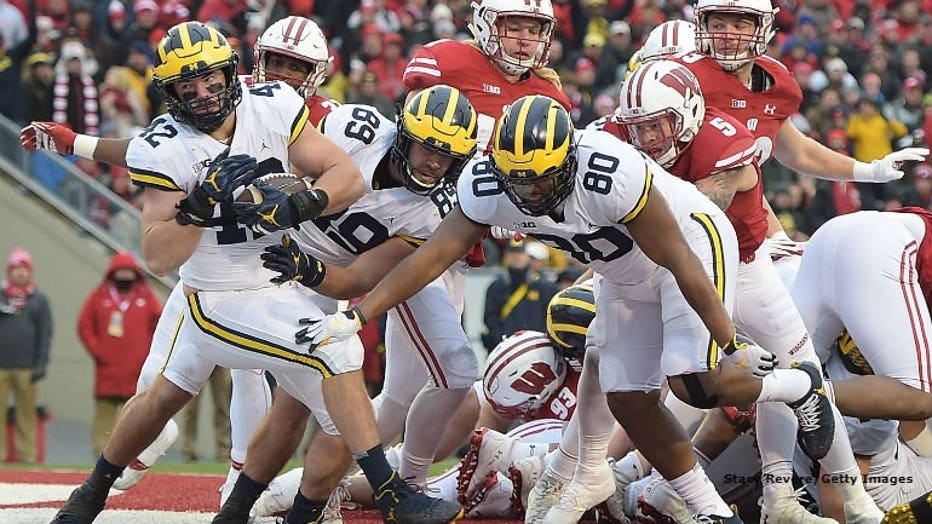 MADISON, WI - NOVEMBER 18: Ben Mason #42 of the Michigan Wolverines scores a touchdown against the Wisconsin Badgers during the second quarter of a game at Camp Randall Stadium on November 18, 2017 in Madison, Wisconsin.

Peters had to be carted off the field in the third quarter after getting hit by linebacker Andrew Van Ginkel following an incompletion on third-and-5 from the Michigan 30.

Without him, the already limited Wolverines didn't have the firepower to come back from a double-digit deficit. The run game was held to 58 yards on 37 carries.

Defense gave Michigan its best chance to upset Wisconsin on the road, and it looked as if that might happen for two-plus quarters.

Momentum turned after Hornibrook showed he could make clutch throws late in the third quarter.

Jonathan Taylor finished with 132 yards on 19 carries, with 87 yards in the second half.

The teams played to a 7-all tie at the half, though Michigan went into the locker room with momentum after fullback Ben Mason scored on a 1-yard run with 2:24 left. Wisconsin was outgained 169-99 in the first half, with its only score coming on Nick Nelson's 50-yard punt return.

Michigan: Before getting hurt, Peters made some nice throws against the nation's top-ranked defense, especially during the seven-play, 84-yard touchdown drive that ended with Mason's score in the first half. Peters had one big mistake in the first after fumbling near the goal line during his scramble out of the pocket from the 5. Overall, the sophomore can build on some positives in his third career start at a tough road venue, especially considering the opponent.

Wisconsin: The defense gave up a couple deep shots, including a 48-yard completion to receiver Donovan Peoples-Jones on the first-half touchdown drive. Otherwise, the unit had another stout day, and coordinator Jim Leonhard dialed up a couple different blitzes in the second half. The Badgers followed a season-long script of recovering from mistakes. A second straight win over a ranked opponent should look good to the College Football Playoff selection committee.

Michigan: The Game against Ohio State at the Big House on Nov. 25.

Wisconsin: Travels to Minnesota on Nov. 25 in the rivalry game for Paul Bunyan's Axe.