EAST RUTHERFORD, N.J.  — Eli Manning ended his 16-year NFL career on his own terms. He was classy, well-prepared and walked away as a New York Giant.

In a roughly seven-minute speech touched with a little humor and almost no emotion, the 39-year-old Manning officially ended his career Friday at a packed news conference surrounded by his family, friends and former teammates and coaches and the two Super Bowls he delivered to the storied franchise.

“From the very first moment I did it my way,” said the low-key Manning, who followed in steps of Archie, his father, and Peyton, his brother, as NFL quarterbacks. “I could not be someone other than who I am. Undoubtedly, I would have made the fans, the media, even the front office more comfortable being a rah-rah guy.

“But that's not me," Manning said. “Ultimately I choose to believe that my teammates and the fans learned to appreciate that. What they got was pure unadulterated Eli."

The one person who was emotional was Giants co-owner John Mara, who said Manning would be inducted into the team's ring of honor at MetLife Stadium next season and that the quarterback's No. 10 jersey was being retired.

Mara's eyes welled, recalling the final game of Manning's rookie season in 2004. The kid from Ole Miss by way of New Orleans rallied the Giants to a win over Dallas. It was the last game the late co-owner Wellington Mara watched.

“I can remember walking to the locker room with him afterward and him saying to me, "I think we found our guy." And how right he was," John Mara said of his father.

The holder of almost every Giants' passing record, Manning said he had no immediate plans. He admitted he would miss the time with teammates, the game preparation, the fans and the beers in the back of the bus after wins. He plans to spend time with his family and friends reliving the positive memories, ignoring the bad times, enjoying himself and being an assistant coach on his daughter's third-grade basketball team. A job with the Giants is a possibility, he said. 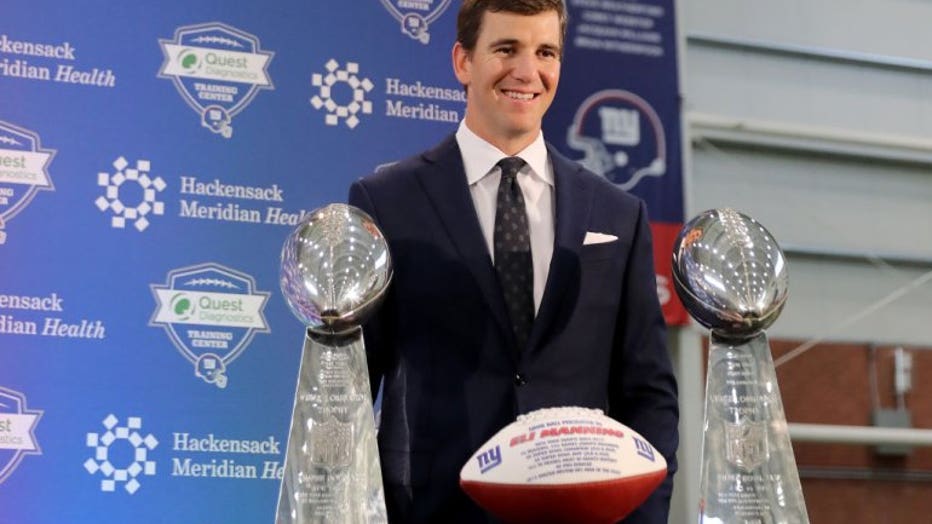 “For most of my life, people have called me easy. Believe me, this is nothing easy about today," said Manning, who has been the face of the organization with his play on the field and his charity work off it. “Wellington Mara always said, "Once a Giant, Always a Giant." For me, it's ‘Only a Giant.’''

Manning was No. 1 overall pick by the Chargers in 2004 but he was traded to the Giants on draft day. He became the Giants' quarterback after nine games and started the next 222 games overall in a streak that ended in December 2017.

Manning led the Giants to titles after the 2007 and '11 seasons, beating the Patriots both times.

His first and the team's third Lombardi Trophy was over the then-undefeated Patriots. It was highlighted by the David Tyree helmet catch and the game-winning touchdown pass to Plaxico Burress. 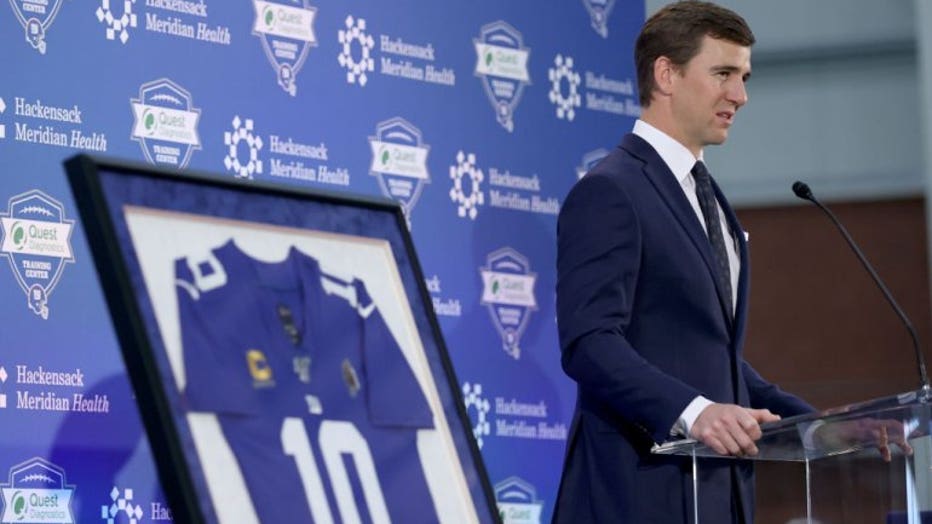 His second title game featured a late game-winning, 88-yard drive ignited by a 38-yard-pass to Mario Manningham right in front of the Patriots' sideline.

It was classic Manning, not being bothered by the pressure of the moment.

“How good was he today?” said Tom Coughlin, who was the head coach of Manning's two Super Bowl teams. “He was composed for the most part and refused to get too sentimental about things we all talk about.''

Coughlin will always remember the Manning he saw on a daily basis.

“You just knew the quality of the man," Coughlin said. “There he is sitting right in front of you every day, the start of every day was always a meeting. You knew you were going to get his best and it was going to be a focused best.”

Manning wasn't a saint. He was prankster in the locker room, changing the languages on teammates' cell phones or putting colored dyes in their socks. He once smeared petroleum jelly on center Shaun O'Hara's car after a disagreement.

It was all part of the game, although the last eight years were tough, with the Giants making the playoffs once.

His final season ended with him being replaced by rookie Daniel Jones as the starting quarterback after two games. He did have a final hurrah, starting and winning a game over the Dolphins after Jones was hurt in December.

“That was my farewell and a moment I will cherish forever," said Manning.

So will Jones, who is the future quarterback after being taken sixth overall in last year's draft. He learned from Eli all season, when times were good and when times were bad.

“More than anything you learned how he did it," Jones said. “You watched how he interacted with people, how he works himself. There is no better way to learn from than to see it in action and done every day at a consistently highest level in terms of leadership and being a good teammate.”

“I knew 100% I'm not going to regret this," Manning said. “When I make a decision, I commit to it and make it the right decision. This is it and this is the right one. It's an honor to have played here 16 years and to have only played here."