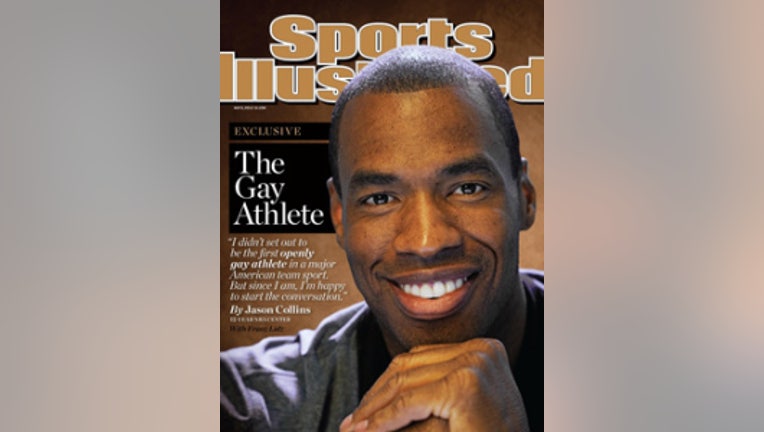 (CNN) -- Jason Collins, who played with the NBA's Boston Celtics and Washington Wizards this season, has disclosed that he is gay. This makes him the first active openly gay male athlete in the four major American pro team sports. The center, who said he is now a free agent "literally and figuratively," made the disclosure in a column appearing in the upcoming issue of Sports Illustrated.

It likened the announcement to Jackie Robinson, the first African-American to play in major league baseball in the modern era.

"At a time when millions are reflecting on the life and legacy of Jackie Robinson, Jason Collins is a hero for our own times," the group said.

Collins is a 7-foot center who played with six NBA teams over the past 12 seasons. Along with the Wizards and Celtics, they are the Minnesota Timberwolves, New Jersey Nets, Atlanta Hawks and Memphis Grizzlies. He has averaged 3.6 points and 3.8 rebounds in 713 career games and he has had a great deal of playoff experience with the Nets mostly and the Hawks.

"We are proud he has assumed the leadership mantle on this very important issue," he said in a statement.

Washington Wizards President Ernie Grunfeld said the team is "extremely proud of Jason and support his decision to live his life proudly and openly."

Boston Celtics head coach Doc Rivers called Collins "a pro's pro" and one of his favorite players he ever coached.

"If you have learned anything from Jackie Robinson, it is that teammates are always the first to accept," River said. "It will be society who has to learn tolerance."

"He has been a leader on and off the court and an outstanding teammate throughout his NBA career. Those qualities will continue to serve him both as a player and as a positive role model for others of all sexual orientation."

Collins played his college ball at Stanford University. Chelsea Clinton, the daughter of former President Bill Clinton and a Stanford alumna, wrote on Twitter that she is "very proud of my friend Jason Collins for having the strength & courage to be the first openly gay player in the NBA."

Bill Clinton called the announcement an "important moment for professional sports and in the history of the LGBT community."

Collins, who had been traded by the Celtics to the Wizards this season, wrote in his essay that U.S. Rep. Joe Kennedy, D-Massachusetts, helped prompt his decision to come out as gay. Kennedy and Collins were roommates at Stanford. He recounts hearing about Kennedy, who is not gay, marching in Boston's Gay Pride Parade.

"For as long as I've known Jason Collins he has been defined by three things: his passion for the sport he loves, his unwavering integrity, and the biggest heart you will ever find," Kennedy said. "I'm proud to stand with him today and proud to call him a friend."

President Barack Obama, a big basketball fan, hadn't yet weighed in, but White House spokesman Jay Carney said, "I can certainly tell you that here at the White House we view that as another example of the progress that has been made and the evolution that has been taking place in this country and commend him for his courage and support him."

Active players posted their approval on Twitter. The Los Angeles Lakers' Kobe Bryant said: "Proud of @jasoncollins34. Don't suffocate who u r because of the ignorance of others." Steve Nash, also a Laker, said: "The time has come. Maximum respect."

Michael Strahan, the former New York Giants defensive end, praised Collins for "having the courage to stand up and out for who he is. I support, respect and salute you!!"

Collins' twin brother, Jarron, who also played in the NBA, were teammates at Stanford. Jarron tweeted about Jason: "Very proud of you."

A few athletes have come out as gay after they've left professional sports. One is John Amaechi, a former NBA player.

Amaechi told CNN he hopes Collins will be a catalyst for a wider acceptance of openly gay athletes, saying he believes Collins is better equipped than anyone who came before him to handle the attention that will come his way. But it may take more, Amaechi said.

People like to believe one iconic figure can change things, he said, "but the reality is that when there's this tipping point, or enough people coming together deciding that change is necessary, that's when change happens."

The Women's National Basketball Association has had its share of milestones and openness as far as gays are concerned. In 2005, Sheryl Swoopes -- a top player in the WNBA, the women's pro league -- announced she was gay.

Brittney Griner, the No. 1 pick in this year's WNBA draft, recently said in an interview with Sports Illustrated that she is gay. Griner finished her college career as the NCAA's all-time leading shot-blocker with 748 and as the No. 2 all-time scorer with 3,283 points.