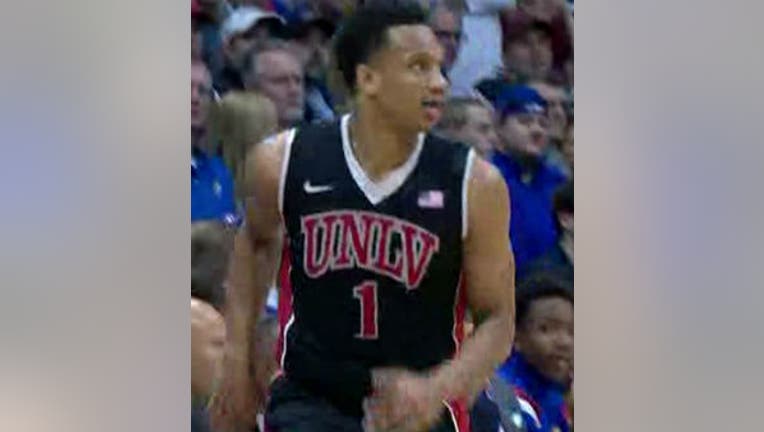 BROOKLYN, New York -- The Milwaukee Bucks tonight selected guard Rashad Vaughn with the 17th overall pick in the 2015 NBA Draft. The team also acquired guard Greivis Vasquez from the Toronto Raptors in exchange for the draft rights to Norman Powell – the 46th overall pick in tonight’s draft – and a protected 2017 first round pick that originally belonged to the L.A. Clippers.

Vaughn, a 6-foot-6-inch guard out of UNLV, was named the Mountain West Conference’s Freshman of the Year, Honorable Mention All-League and Second Team NABC All-District 17 in 2014-15 after averaging a team-high 17.8 points, along with 4.8 rebounds and 1.6 assists per game.

He started all 23 games in which he played for the Rebels before suffering a season-ending knee injury, and at the time of the injury, his scoring average ranked second in the MWC and third in the nation among freshmen. Vaughn scored in double figures in 21 of his 23 games, including in each of his last 19 contests. He registered 20 or more points nine times and 30 or more two times. He scored a season-high 31 points vs. Utah State on Jan. 24, 2015, which tied the league’s freshman class single-game record for most points scored against a conference opponent.

As a high school senior out of Findlay College Prep (Henderson, Nev.), Vaughn was a McDonald’s All-American and played in the Jordan Brand Classic.

"He was in our last workout here on Monday and he shot the ball extremely well for us. Again, he has nice size -- 6'5, he's only 18 years old. You know, we just continue to get younger -- but he'll grow into that prototype NBA guard body and we think he has a chance to be a good player," Milwaukee Bucks General Manager John Hammond said.

Vasquez joins the Bucks after averaging 9.5 points, 2.6 rebounds and 3.7 assists in a career-high 82 games (28 starts) for the Toronto Raptors in 2014-15. Last season, he hit a single-season career-high 133 3-pointers, which is 24 more than his previous best for a season, while connecting on a career-best 37.9 percent of his attempts from three.

The 6-foot-6-inch guard owns career averages of 9.2 points, 2.6 rebounds and 4.9 assists over 375 games (157 starts) in five seasons with Memphis, New Orleans, Sacramento and Toronto. His best statistical season came in 2012-13 when he averaged 13.9 points, 4.3 rebounds and 9.0 assists in 78 games (78 starts) for New Orleans. His 704 total assists that year ranked first in the NBA, and his assists average of 9.0 ranked third in the league. Vasquez earned his only Player of the Week honor when he was awarded the accolade for the Western Conference for the week of Dec. 30, 2012.

The Venezuelan-born player was selected with the 28th pick in the 2010 NBA Draft. He is the first of his nationality to be drafted into the NBA, and only the third Venezuelan citizen to ever play in the NBA. Vasquez attended Maryland and played four years for the Terrapins. In 2010, he earned the Sportsman of the Year Award from the Greater Washington Sports Alliance.