LOS ANGELES — From the red carpet to the main stage, sadness loomed over music’s biggest night Sunday at the arena in downtown Los Angeles where Kobe Bryant played for 20 years for the city's NBA team.

Bryant's death in a helicopter crash earlier in the day was acknowledged in the opening minutes of the Grammys broadcast. Before her performance, Lizzo said, “This is for Kobe.” She went on to perform “Truth Hurts” and “Cuz I Love You.”

Host Alicia Keys said she was feeling “crazy sad” about Bryant. She was joined on stage with Boyz II Men, who collectively sang “It’s So Hard to Say Goodbye to Yesterday.”

“The whole wide world lost a hero,” the singer said in front of the audience. “We are standing her literally heartbroken in the house that Kobe Bryant built.”

Bryant, his 13-year-old daughter Gianna, and seven others were killed in the crash on a steep hillside in dense morning fog in Southern California. He was 41 and had retired from the Lakers in 2016.

Some shed tears for Bryant on the red carpet. Others were almost speechless ahead of the 62nd annual awards show.

DJ Khaled said the news about Bryant's death was “devastating.” He took part in a tribute to the late Nipsey Hussle that also included John Legend, Meek Mill, Kirk Franklin, Roddy Ricch and YG. They performed “Letter to Nipsey" and “Higher."

At the end of the performance, each performer turned around and pointed toward a screen with a picture of Hussle and Bryant. The tribute prompted a standing ovation that lasted for more than a minute.

Tyler, the Creator said he went through different emotions. 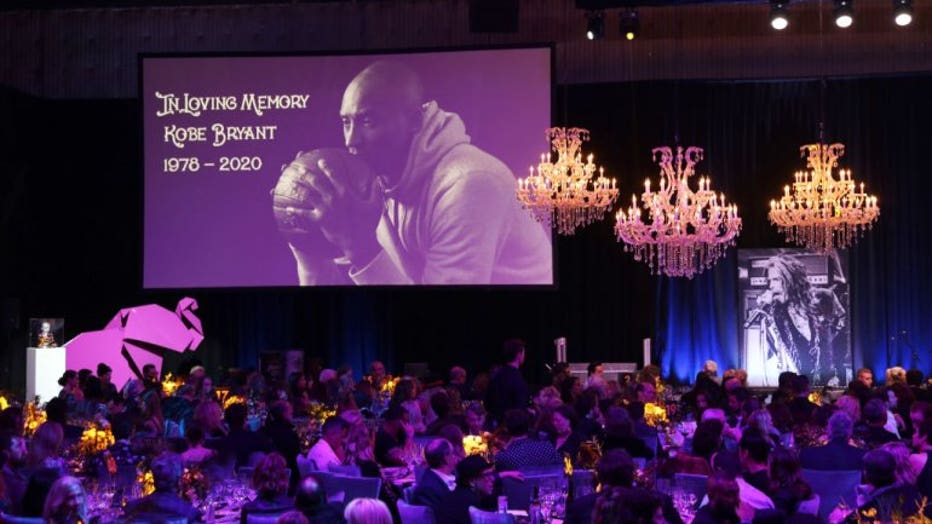 “The news was heavy, especially being in LA and being near the Staples Center within a short period of time between him and Nipsey,” he said backstage after winning best rap album. Hussle, who was known for being a huge Lakers fan, was shot and killed 10 months ago in Los Angeles.

“If you’re from Los Angeles, depending on which sector you’re in, that (expletive) is really heavy," the rapper continued. “We took an L tonight. Rest in peace to Kobe. We also took a win just being from Los Angeles. It’s mixed emotions.”

Cyrus had No. 24, Bryant’s number, on his guitar, and Lil Nas X had a Bryant jersey draped over a chair at the beginning of their performance of “Old Town Road.” 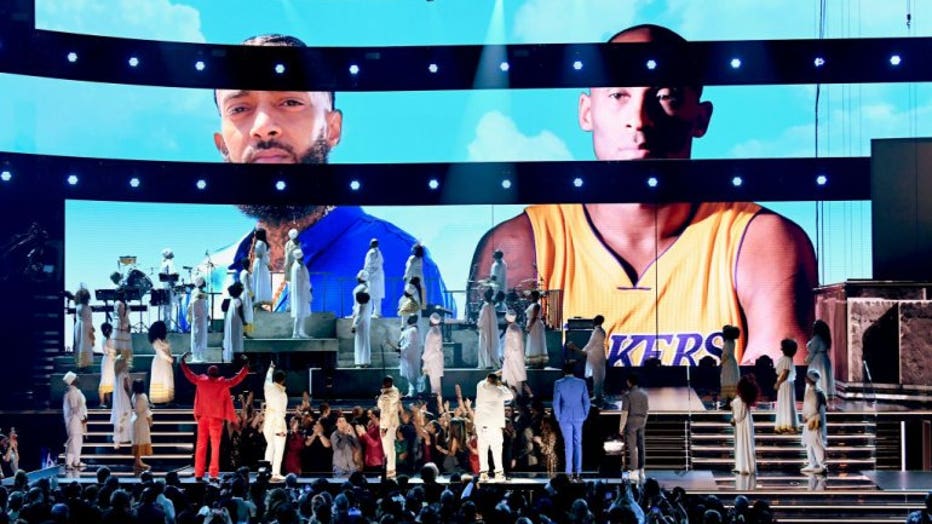 Run-DMC member Joseph “Run” Simmons held up a white Bryant Jersey during the group's performance of “Walk This Way” with Aerosmith.

Ross remembered a brief conversation he had with Bryant that involved him admiring the NBA star’s craft. The rapper said the game would miss him.

“It's just a huge loss to the game,” Ross said on the red carpet. “He was a great example on a lot of different stages.”

Singer Charlie Wilson called Bryant a “beautiful soul” and “one of the greatest who played the game.”

Hit-Boy, who won a Grammy with Hussle and Roddy Ricch for best rap performance for “Racks in the Middle,” said he was not going to attend the awards when he learned about Bryant’s death. But the producer said he decided to stick it out in deference to several relatives who were joining him.

“I was two seconds away from just canceling everything,” Hit-Boy said.

“I hope everyone. ... gives their loved ones a hug and a kiss,” Kraft said. “Don’t take anything for granted. We should pinch ourselves and make sure we remember those we care most about."

Outside Staples Center, fans wearing Bryant’s No. 8 and No. 24 jerseys flocked to the arena to show their respect for the Laker legend. A few hundred people gathered at L.A. Live in front of a mega screen with a smiling Bryant that read, “In Loving Memory of KOBE BRYANT 1978-2020”

Smokey Robinson choked up on camera as he spoke of Bryant, whom he called a friend.

“As a dad myself, to think that his daughter was there with him and there was nothing he could do for her,” he said. “My god.”