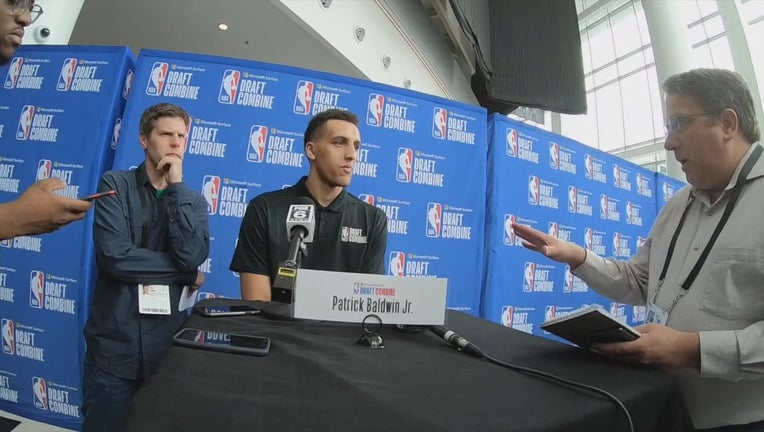 CHICAGO - Patrick Baldwin Jr. is attacking his most important offseason yet.

"I have no excuses anytime I step on the court," said Patrick Baldwin Jr., UW-Milwaukee forward. "I've been on record saying this, I have to be an elite player and I have to perform. There was a lot to uncover this year, and a lot that I really wasn't expected to go through this year. All of it was growing pains, and I'm ready to take that next step and show the player that I am."

Once projected as a lottery pick, mock drafts now have Baldwin slated as a late first-round selection after he played in 11 games for the Panthers because of a lingering ankle issue and COVID. Even so, Baldwin is moving past a difficult freshman season at UW-Milwaukee.

"The biggest priority is just shifting focus," said Baldwin Jr. "Now, just putting that season behind me and take what I can and learn from it. You know, watching film, reviewing film, still trying to get better, but at the end of the day you have to move forward, and you've got to figure out where you fit in in the league, where you can stand out and where you impact winning."

At the NBA Draft Combine in Chicago, the forward wanted to do just that, and wow prospective teams.

"It’s important to stay in the moment, stay locked in," said Baldwin Jr.

While Baldwin did not play in five-on-five scrimmages, he did participate in physical testing. However, his ankle effected his ability to perform at 100 percent. As a matter of fact, Baldwin's standing vertical leap measured 23.5 inches, which was the second-lowest mark of the week. Even so, he is not phased.

"I’m not one to be worried about the testing at all," said Baldwin Jr.

What matters most is that Baldwin's health is progressing.

"It's a disappointing and frustrating injury to deal with, and with that seeing how I am right now, I think I've gotten out of that," said Baldwin Jr. "I think that frustration has been lifted. I'm finally seeing that light at the end of the tunnel."

"You may look at the numbers and say I didn't shoot the ball too well," said Baldwin Jr. "You know at the end of the day, there were just some shots that just didn't go in. I'm still an elite shooter and I'm going to continue to shoot those shots."

Baldwin also believes his strengths will translate over to the NBA.

"You know being 6-10 , anytime you can see the rim, you feel like it's going to go in," said Baldwin Jr. "You feel like you've got a fighting chance at a shot. You know, maybe not the year I would've liked shooting the ball, but I still believe that I have high level shot making and I think that's what I'm going to bring Day 1."

His talents are being noticed by NBA teams. So far, he's met with 13 teams including the Warriors, Lakers, Heat and Celtics.

"It's been good conversation," said Baldwin Jr. "I've learned a lot from the people that I've talked to. So just taking everything on the chin moving forward."

While the 19-year-old is prepared to take that next level leap, he's leaving himself the option to return to college if need be.

"I'm 99.9 percent committed to staying in this process, but just given the injury history, you know you've always got to protect yourself," said Baldwin Jr.

But for now, he's driven to become a pro.

Baldwin Jr. hopes to hear his name called in this year's NBA Draft, which will be held in the Barclays Center in Brooklyn on June 23.