TORONTO -- Kyle Lowry scored 22 points, including the clinching basket with less than 10 seconds to play, and the Toronto Raptors beat the Milwaukee Bucks 106-100 on Tuesday night, evening their first-round playoff series at 1-1.

DeMar DeRozan had 23 points, Serge Ibaka added 13 of his 16 in the second half and Jonas Valanciunas had 10 points and 10 rebounds for the Raptors, who improved to 5-1 when playing Game 2 of a playoff series on their home court. 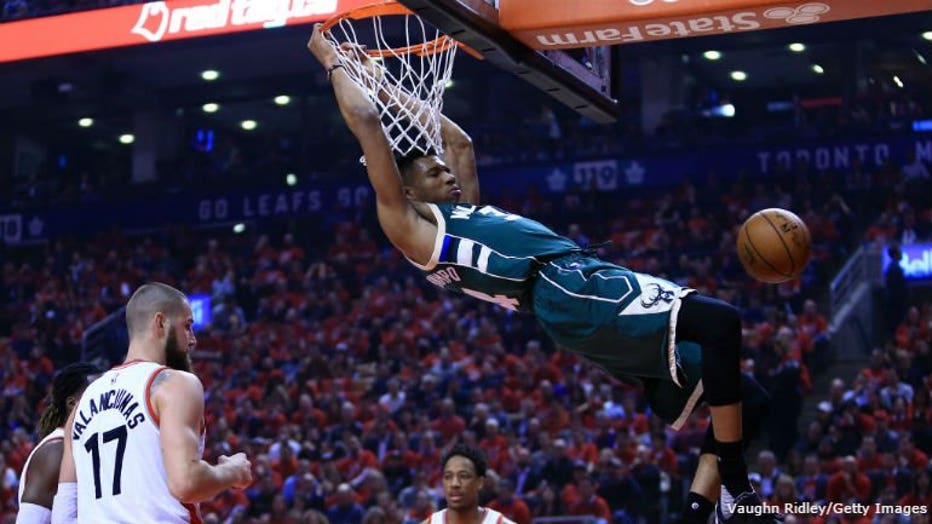 TORONTO, ON - APRIL 18: Giannis Antetokounmpo #34 of the Milwaukee Bucks dunks the ball as Jonas Valanciunas #17 of the Toronto Raptors looks on in the first half of Game Two of the Eastern Conference Quarterfinals during the 2017 NBA Playoffs at Air

Game 3 is Thursday night in Milwaukee.

Giannis Antetokounmpo had 24 points and 15 rebounds for the Bucks. Khris Middleton scored 20 points and Greg Monroe had 18.

Leading 84-83 through three quarters, Toronto opened the fourth with an 11-0 run that included a pair of 3-pointers by Ibaka, and a third from P.J. Tucker.

Milwaukee battled back, and a layup by Antetokounmpo cut it to 98-97 with 2:46 remaining, leading to a Raptors timeout.

Ibaka made a jumper to put Toronto up three but Antetokounmpo answered with a 3-pointer, tying it at 100-all with 2:03 left.

DeRozan broke the tie with a jumper and, after missed 3-pointers by Malcolm Brogdon and Matthew Dellavedova, Tucker missed a pair of free throws.

DeRozan grabbed the rebound on a missed jumper by Middleton, setting the stage for Lowry's decisive basket.

DeRozan scored 12 points in the first and Antetokounmpo made just one of six field goal attempts in the opening quarter as Toronto led 28-25.

Lowry scored 12 points in the second but Milwaukee scored the final five points of the half to keep it close. Toronto led 55-52 at the break.

DeMarre Carroll scored seven points in a 13-0 Toronto run that gave the Raptors a 73-60 lead midway through the third but the Bucks answered with a 15-4 run over the next three minutes. Toronto led 84-83 heading to the fourth.

Bucks: Antetokounmpo missed six of his first eight field goal attempts. His only made basket in the first quarter was a dunk. ... Antetokounmpo finished with seven assists.

Raptors: Ibaka started despite a sore left ankle sustained when he stepped on Antetokounmpo's foot in the third quarter of Game 1. ... Lowry had four rebounds and five assists. ... Former Toronto C Bismack Biyombo attended the game.