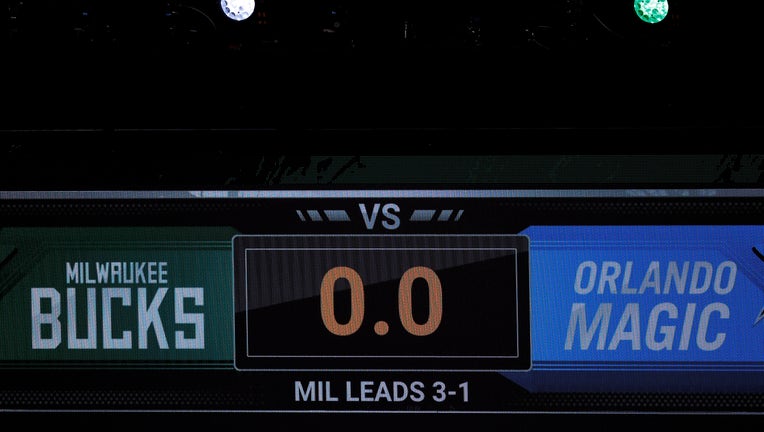 LAKE BUENA VISTA, FLORIDA - AUGUST 26: The game clock sits at 0.0 after the scheduled start time of Game Five of the Eastern Conference First Round between the Milwaukee Bucks and the Orlando Magic during the 2020 NBA Playoffs at AdventHealth Arena a

ORLANDO, Fla. - NBA players made their strongest statement yet against racial injustice Wednesday when the Milwaukee Bucks didn't take the floor for their playoff game against the Orlando Magic. Three other NBA playoff games are also being postponed in the wake of the Bucks' actions, Associated Press reports.

Milwaukee and Orlando were set to begin Game 5 of their series shortly after 4 p.m., with the Bucks needing a win to advance to the second round. 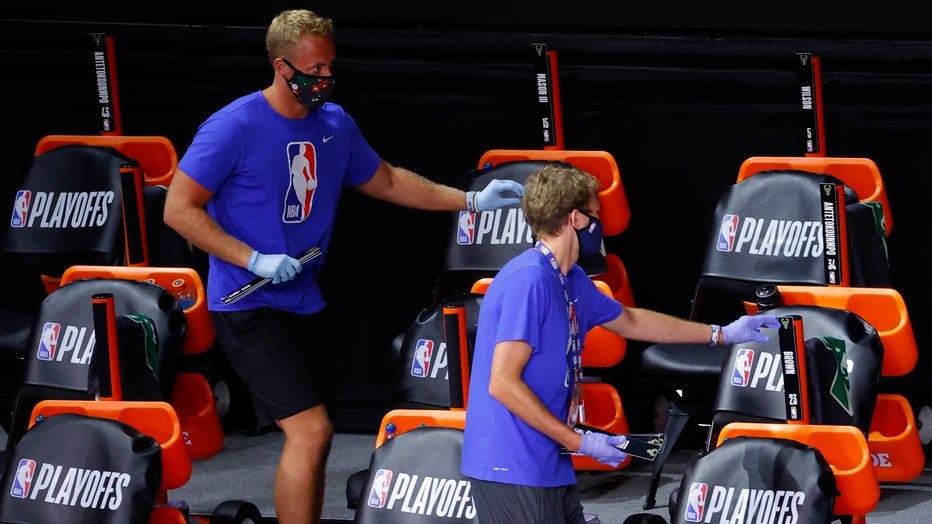 LAKE BUENA VISTA, FLORIDA - AUGUST 26: Workers remove the player name placards from the bench chairs after the Milwaukee Bucks sit out Game Five of the Eastern Conference First Round in protest during the 2020 NBA Playoffs against the Orlando Magic a

Players had been discussing boycotting games in the bubble after the shooting of Jacob Blake, a Black man, by police in Kenosha, Wisconsin. More discussions were expected Wednesday, but even before that the Bucks apparently they would act.

Magic players and referees were on the floor for the game but Milwaukee never took the floor. Eventually, everyone else left and the arena staff soon took the balls, towels, and tags that go on player chairs back inside.

In the NBA rule book, not stepping onto the floor would be a forfeit by Milwaukee. There is also a multi-million dollar fine assessed to a team that forfeits. Whether the league enforces those rules, in this case, remains to be seen.

TheAthletic.com is reporting the Magic is not accepting the Bucks' forfeit.

“The past four months have shed a light on the ongoing racial injustices facing our African American communities. Citizens around the country have used their voices and platforms to speak out against these wrongdoings.

“Over the last few days in our home state of Wisconsin, we’ve seen the horrendous video of Jacob Blake being shot in the back seven times by a police officer in Kenosha, and the additional shooting of protestors. Despite the overwhelming plea for change, there has been no action, so our focus today cannot be on basketball.

“When we take the court and represent Milwaukee and Wisconsin, we are expected to play at a high level, give maximum effort and hold each other accountable. We hold ourselves to that standard, and in this moment, we are demanding the same from our lawmakers and law enforcement.

“We are calling for justice for Jacob Blake and demand the officers be held accountable. For this to occur, it is imperative for the Wisconsin State Legislature to reconvene after months of inaction and take up meaningful measures to address issues of police accountability, brutality and criminal justice reform. We encourage all citizens to educate themselves, take peaceful and responsible action, and remember to vote on Nov. 3.”

We fully support our players and the decision they made. Although we did not know beforehand, we would have wholeheartedly agreed with them. The only way to bring about change is to shine a light on the racial injustices that are happening in front of us. Our players have done that and we will continue to stand alongside them and demand accountability and change.

"The Milwaukee Bucks were scheduled to begin game five of their first round playoff series against the Orlando Magic at 3 p.m. central time. Instead, the team banded together and remained in the locker room to boycott the game in protest of the police shooting of Jacob Blake in Kenosha.

"This is a seminal moment, and we applaud the Bucks for stepping up and providing leadership by putting issues of racial justice ahead of sports. It is our hope that this will encourage others to do the same and use their platforms to push these conversations forward so we can enact meaningful and lasting change. "

"The NBA and the National Basketball Players Association today announced that in light of the Milwaukee Bucks’ decision to not take the floor today for Game 5 against the Orlando Magic, today’s three games – Bucks vs. Magic, Houston Rockets vs. Oklahoma City Thunder and Los Angeles Lakers vs. Portland Trail Blazers - have been postponed.  Game 5 of each series will be rescheduled."

Reaction to fatal shootings in Kenosha amid 3rd night of protests

Reaction to the fatal shooting of two people and wounding of another amid protests in Kenosha is generating a flood of reaction.