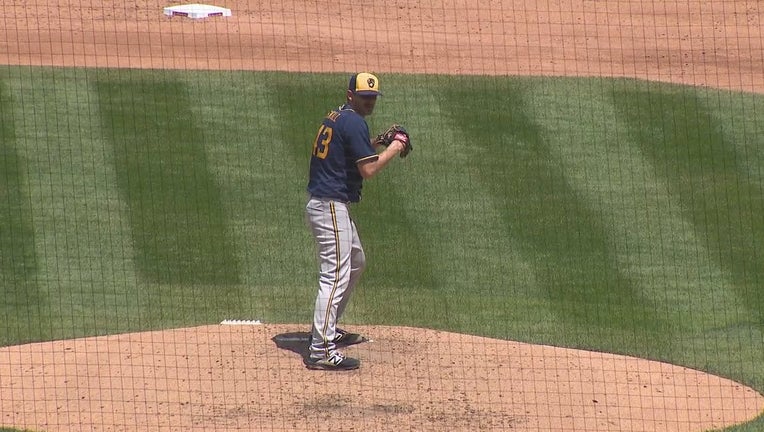 CHICAGO - A major league debut is one to remember for a pitcher, so Memorial Day was a big day for Ethan Small.

The 25-year-old left-hander was making waves in Nashville. Add in injuries to starters Brandon Woodruff and Freddy Peralta, and Small got the call-up.

He was first on the mound in a Memorial Day doubleheader against the Chicago Cubs at Wrigley Field.

And the butterflies he had before his debut?

"(They were) bad," laughed Small. "I would say I was probably more calm when I was warming up than I was like last night and this morning. I was so antsy to get here and get going, so once I got going, I felt pretty good."

Small started out strong against the Cubs, striking out four batters in his first two full innings of work.

"Yeah, I thought the first two were all I could've asked for really," said Small. "I thought I had really good command of my fastball at the top of the zone, which was working for me pretty well, and then the changeup still was playing around the zone. A few high ones early but found it a little bit later on."

However, the third inning quickly got away from him. Small threw 39 pitches and walked four batters in that inning.

"It's kind of tough because I thought I was on cruise control through those first two, and then got out there for the third," said Small. "Made a couple bad pitches and just kind of snowballed. Ended up losing my breath a little bit, could never really get it back, so just turned into one of those ugly long innings that I don't ever want to have, you know."

"Just as far as what I can take away from today's game is slowing myself down, breathing a little bit better and staying in the zone," said Small.

Small's start will also go down in the Brewers record books. For the first time in team history, the Brewers also faced a team with a pitcher making his MLB debut, with Matt Swarmer on the mound for Chicago.

In a duel of youngsters, Small is using his performance as a learning experience moving forward.

"That's one of the biggest takeaways from today is pitching in front of a great crowd like that, being out there and having the adrenaline rush, the nerves, and trying to work through that," said Small.

On the biggest day of his baseball career so far, Small had 21 members of his friends and family in the stands to watch him pitch.

"It's one of the things I've dreamed about since I was a little kid, and you know, tough result at the end of the day but, I'm happy that we all got to experience it together," said Small.