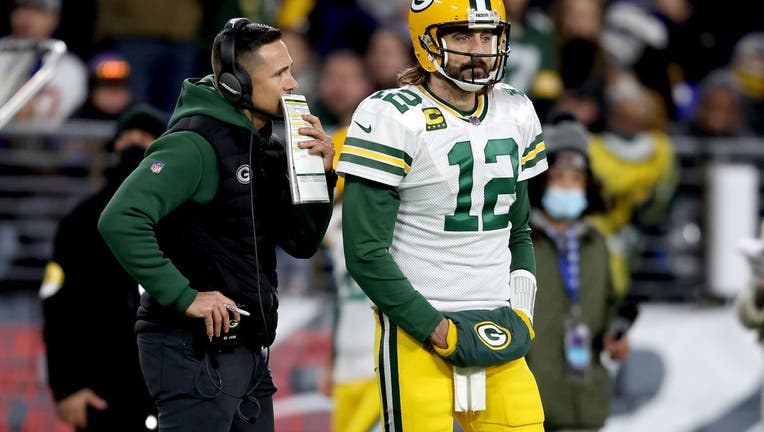 BALTIMORE, MARYLAND - DECEMBER 19: Head coach Matt LaFleur of the Green Bay Packers talks to Aaron Rodgers #12 during the fourth quarter of the game against the Baltimore Ravens at M&amp;T Bank Stadium on December 19, 2021 in Baltimore, Maryland.

GREEN BAY, Wis. - Another season, another disappointing end for Aaron Rodgers and the Green Bay Packers.

After Green Bay’s 13-10 loss to the San Francisco 49ers on Saturday night in the divisional round of the NFC playoffs, Rodgers said that he would take his time to determine his future with the organization. However, Packers head coach Matt LaFleur made it clear that he wants the future Hall of Famer to return.

"This guy does so much for our football team. No only what you guys see on Sundays or every game day, but what he does in that locker room. How he leads. I just know what he puts into this thing. And certainly, I'm extremely disappointed that we couldn't get over the hump, for not only him, but for everybody in that locker room."

LaFleur has been with Rodgers in Green Bay for the past three years. The quarterback-coach combo has 39 victories, which is the most wins for any coach after three seasons in league history. Rodgers completed 67.1% of his passes for 12,416 yards with 111 touchdowns and only 13 interceptions.

They have a 39-9 record and two NFC Championship appearances, but they have a 2-3 playoff record with no Super Bowl appearances.

After the game, Rodgers made it clear that he wants to play for a contender if he returns next year. The Packers are projected to be $40 million over the salary cap this offseason.

"I don't want to be part of a rebuild if I'm going to keep playing," Rodgers said. "So a lot of decisions in the next couple of months."