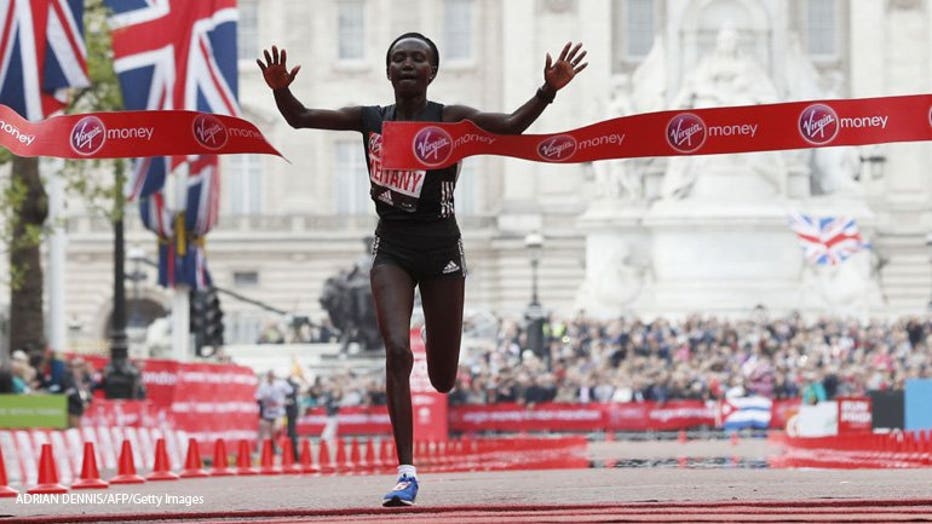 The retired British athlete still remains a world-record holder. Radcliffe fought six years ago with the IAAF to ensure her 2003 marathon time of 2 hours, 15 minutes, 25 seconds — with two male pacemakers — was still recognized as a record rather than just a world-best.

Keitany was on track to break that outright world record halfway through Sunday's race in the British capital in sunny conditions, but the pace eased up. She still ran to victory to seize the women-only record. Tirunesh Dibaba was 55 seconds behind Keitany while fellow Ethiopian, Aselefech Mergia, was third.

"It was very fast pace and I tried to follow it," Keitany said. "I think the course has changed a little bit and it felt better than before. The weather was really good this year. Last year it was very, very cold. My body felt fit enough and I have trained well and I tried to push all the time. I'm very happy with the finish time. Parts of the course are hilly but I train in a very similar area in Kenya so it was not too different for me." 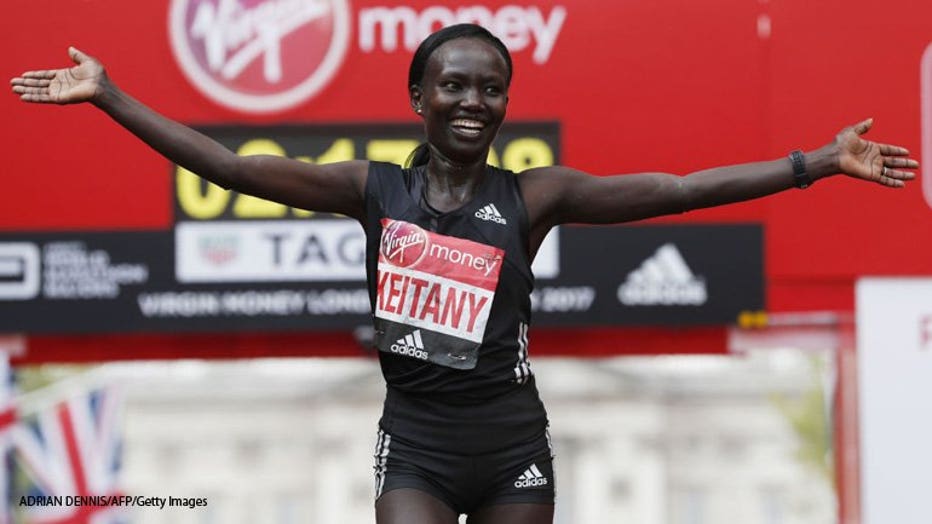 Kenya's Mary Keitany celebrates after winning the women's elite race at the London marathon on April 23, 2017 in London. Kenya's Mary Keitany won a third London Marathon today posting an unofficial time of 2hrs 17min 01sec -- the fastest time in a wo

The women's marathon was missing its defending champion. Keitany's compatriot, Jemima Sumgong, tested positive for the blood booster EPO in a surprise out-of-competition doping test in Kenya in February.

The men's race saw the 24-year-old Wanjiru winning his first major marathon in 2 hours, 5 minutes, 48 seconds. That was nine seconds faster than Kenenisa Bekele of Ethiopia, while Bedan Karoki was third.

The men's and mass race had a royal start, with Prince William, wife Kate and brother Harry pressing a button to sound the klaxon.

There was a British winner in the wheelchair race, with David Weir storming to his seventh victory in the event to end four years of frustration since his last success. The 37-year-old Weir retired from track competition last year after the six-time Paralympic champion failed to win a medal at the Rio de Janeiro Games.

"It's the first time I've felt comfortable in years," Weir said. "It's been a tough four months personally. I've had a lot of background problems in my personal life. It's been tough, especially after Rio. I needed to focus and sort out my head. I knew I had it in the last corner. All I was thinking was 'win, win, win.'"