HOUSTON — Los Angeles Angels catcher Jonathan Lucroy was carted off the field Sunday after a violent collision at the plate with Houston's Jake Marisnick, and manager Brad Ausmus thinks the league should consider suspending the Astros outfielder.

The team said Lucroy was taken to a hospital for a CT scan and is being evaluated for a possible concussion and nose fracture.

The bases were loaded with the game tied at 10 when Marisnick attempted to score on a sacrifice fly by George Springer in a game Houston won 11-10 in the 10th inning.

Marisnick crashed into Lucroy as he attempted to field the throw, and the catcher immediately fell on his back. He didn't move for a few seconds before struggling to sit up. Marisnick tagged home and then leaned over Lucroy to see if he was OK. He lifted his head off the ground a few seconds later as blood dripped from his nose. 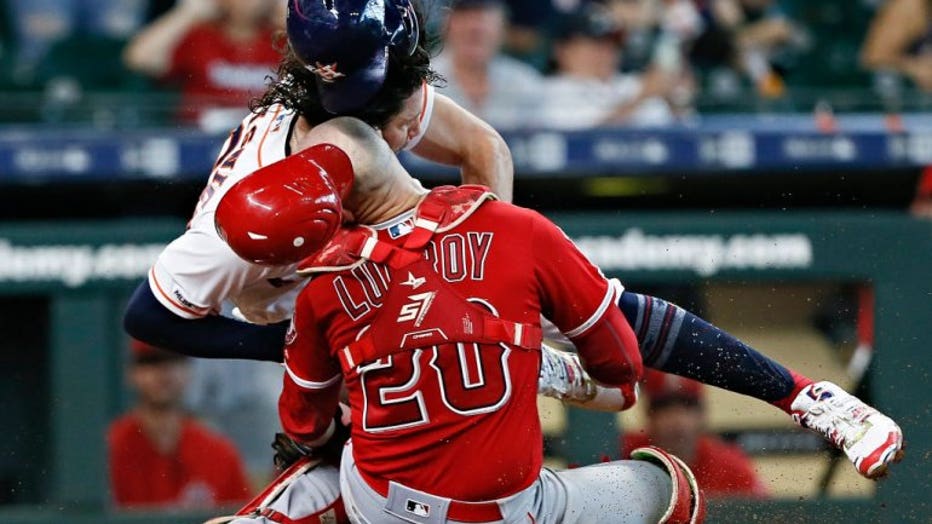 HOUSTON, TEXAS - JULY 07: Jake Marisnick #6 of the Houston Astros collides with catcher Jonathan Lucroy #20 of the Los Angeles Angels of Anaheim as he attempts to score in the eighth inning at Minute Maid Park on July 07, 2019 in Houston, Texas. Mari

"It certainly didn't look like a clean play," Ausmus said. "I don't know what actually happened, but it looked like Marisnick took a step to the left and bowled into him with his arm up. The call was right. Really, I think Major League Baseball should probably take a look at it. Consider some type of suspension, quite frankly."

Marisnick said he was trying to slide headfirst on the inside corner.

"I watched the play again and it looks — he just drops right in front of me and once I kind of made a decision, it was too late," he said. "It was a bad play and I hope he's OK."

"I don't fault Jake because he wasn't hunting him, he wasn't going after him," Hinch said. "He tried to take a step on where Lucroy was going to go, and it's difficult in that little 1-3 foot circle where you're trying to figure out going at full speed what's going to happen. It just turned out to be an ugly play."

Marisnick added that he planned to reach out to Lucroy to check on him.

Angels players rushed to the plate as trainers checked on him. He was lifted to a sitting position after a couple of minutes and held a towel to his nose. He was then helped to a cart and taken off the field while clutching a bloodstained towel.

Mike Trout didn't have a great view, but he sprinted in from center field to see if Lucroy was OK.

"I just saw that it was a pretty big collision," he said. "Just a scary situation."

Ausmus said he hadn't spoken to Lucroy since the game ended, but that he tried talking to him on the field and "he was pretty confused at the time."

Marisnick was called out for colliding with Lucroy and the call was upheld after a crew chief review to end the inning.