“It`s a blast!” Bubble Soccer, originating in The Netherlands, getting lots of attention in Milwaukee

"It`s a blast!" Bubble Soccer, originating in The Netherlands, getting lots of attention in Milwaukee

MILWAUKEE -- Recently, the United States women's soccer team won the Women's World Cup -- drawing terrific television ratings. In Milwaukee, a different kind of soccer is proving to be pretty popular as well. When Serge Usack and Jillian Imilkowski show up and start setting up for one of their events, they attract attention -- and lots of it. That's because they're introducing Milwaukee to "Bubble Soccer." "It's the most aggressive side job that I ever anticipated having, but it's a blast. It's sort of social service/personal amusement quest," Usack said. 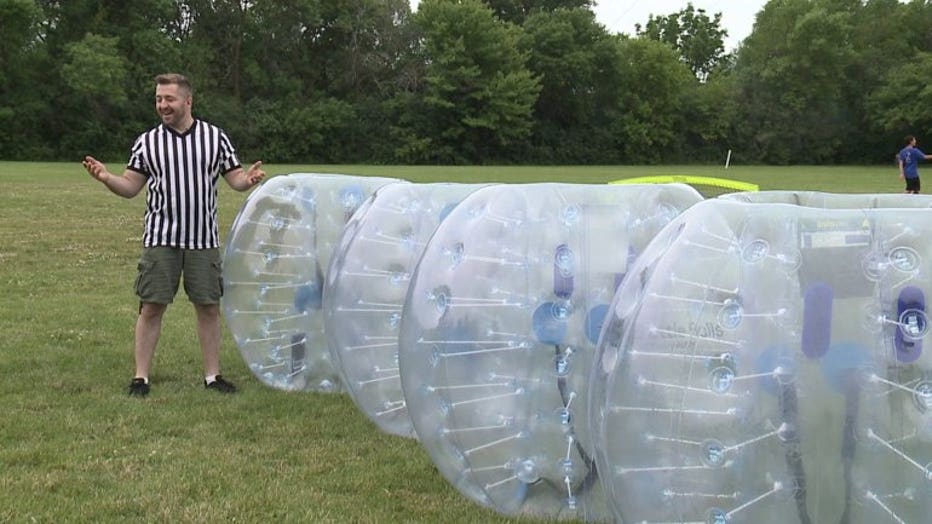 Bubble Soccer is a relatively new activity, originating in The Netherlands within the last decade. Usack and  Imilkowski run the "Milwaukee Bubblers," which is the only crew of its kind in southeastern Wisconsin. Leagues may be a possibility down the road, but right now, they are primarily hiring out for corporate events and private parties, while also staging occasional drop-in games for the public. "It's definitely a sport. It's a workout. These suits weigh about 30 to 40 pounds, so you're running around. They're heavy. It's a workout. It's fun. You're playing soccer in a giant bubble suit, so how seriously can you take it?" Imilkowski said. 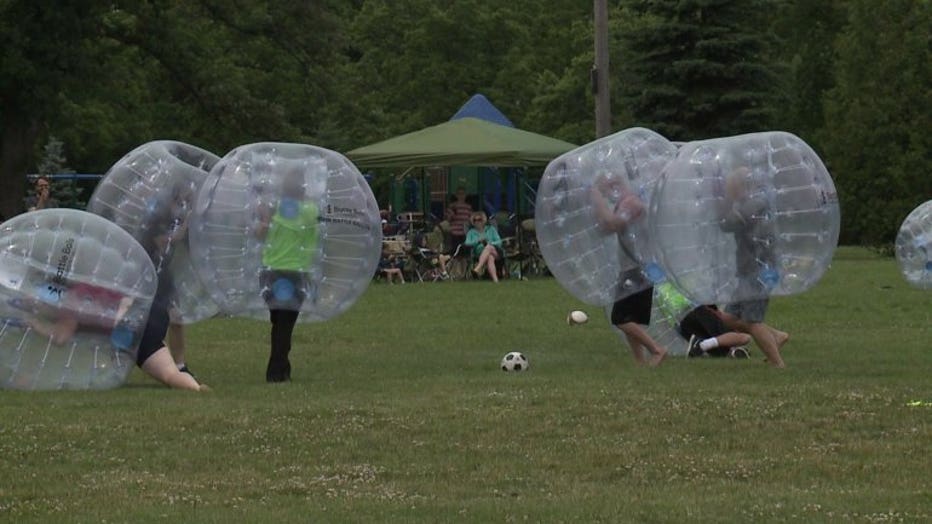 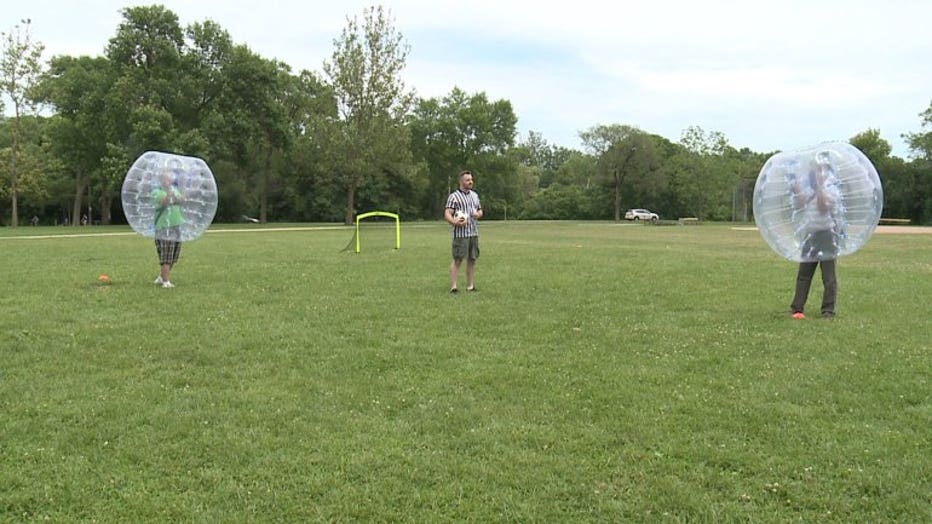 "We've had a bunch of folks pop in and say this was the single best event of their life. We question their life choices, but it's inevitably a really good time for everyone, and to watch adults turn back into eight year olds automatically, it's quite enjoyable," Usack said. "I could see...I was going after green. I could see when they had the ball. The funny thing is, the bubble keeps you from getting as close to the ball as you would if you were just playing soccer naturally, so what happens is you get this cluster of people all going for the ball and then it's just like 'boom' -- everybody falls down," a Bubble Soccer player said. "The good news is, the airbag is already deployed for you, so you really can't get hurt -- even in a high-impact game. But it is fun to watch people really go at each other competitively," Usack said. 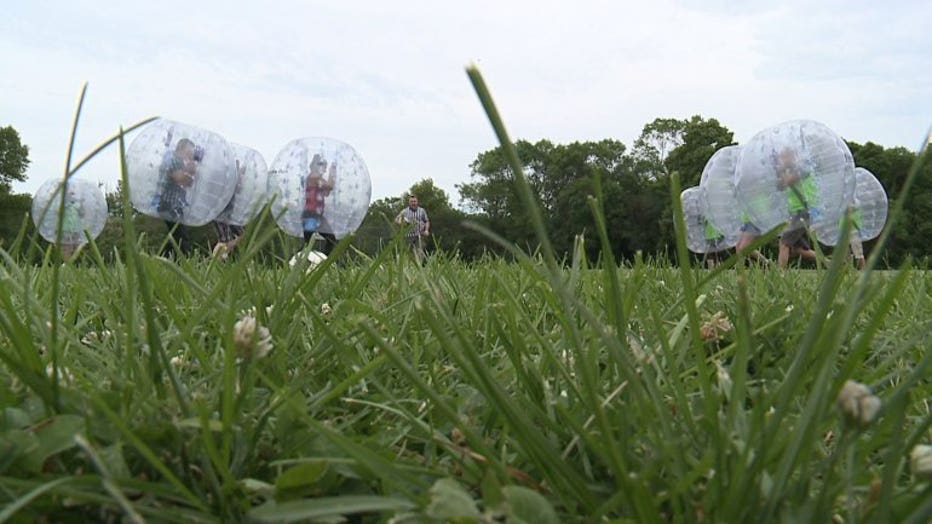 And it has been fun for the two folks in the referee shirts to watch their venture grow. The both work "real" jobs, but you get the sense that they'd love to see how far they can take Bubble Soccer. As it turns out, being on the sidelines is almost as enjoyable as being in the bubbles. "Everybody loves it. Everybody loves it. It's your chance to be a kid again," Imilkowski said. It's not just adults who are recapturing their youth playing Bubble Soccer. Kids get to be kids too. Milwaukee Bubblers does have smaller-sized bubble balls to accommodate the younger set. 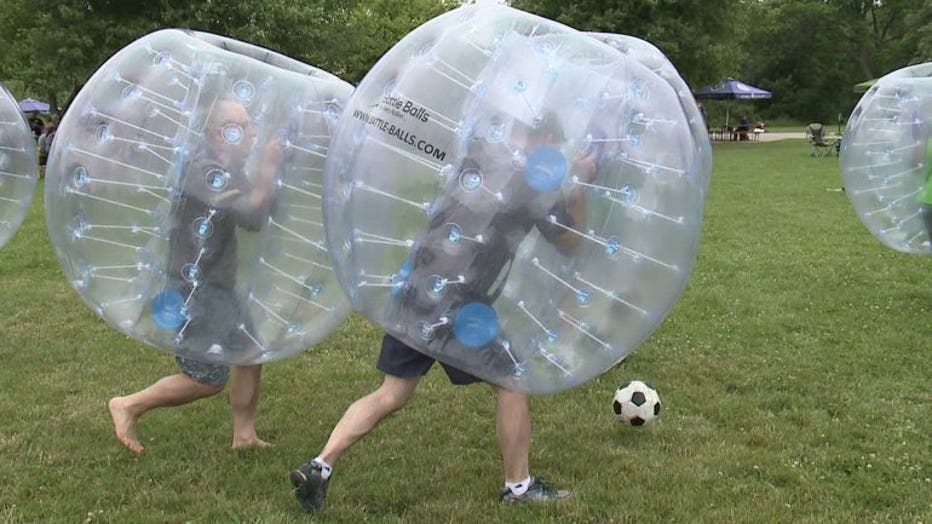 CLICK HERE to learn more about the Milwaukee Bubblers.