“I love him as a brother:” 10-year-old best friends the epitome of the mission of one MPS school

"I love him as a brother:" 10-year-old best friends the epitome of the mission of one MPS school

MILWAUKEE -- The Bill Withers song "Lean On Me" talks about supporting a friend -- and that's just what two Milwaukee Public Schools elementary school students are doing. 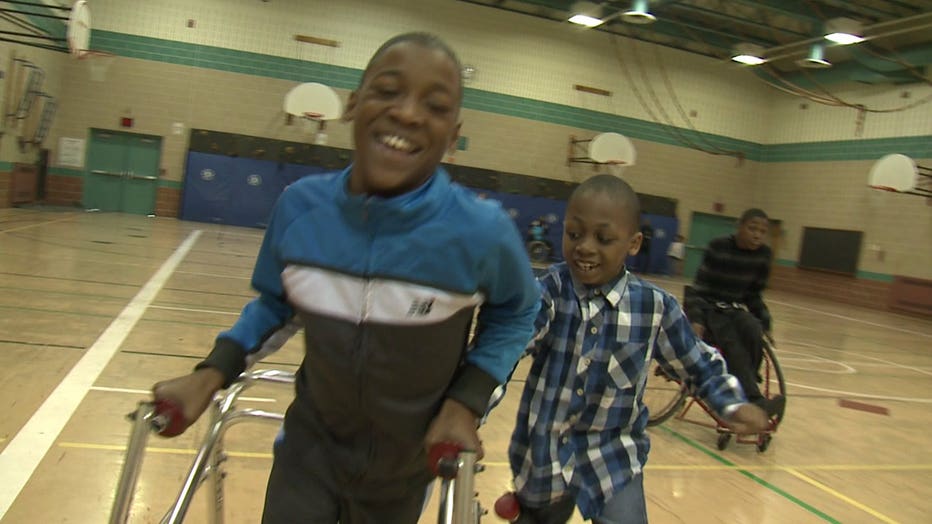 "At the beginning of the year I started hanging out with him for a little bit," Cleveland Nickerson said of his friend, Javon Glass.

Nickerson and Glass met at the beginning of the school year at MPS' F.J. Gaenslen K-8 School. The 10-year-old boys have become fast friends.

Nickerson has attended the school for a number of years. He's in fifth grade. Glass was new to the school at the beginning of this school year. He's in fourth grade. 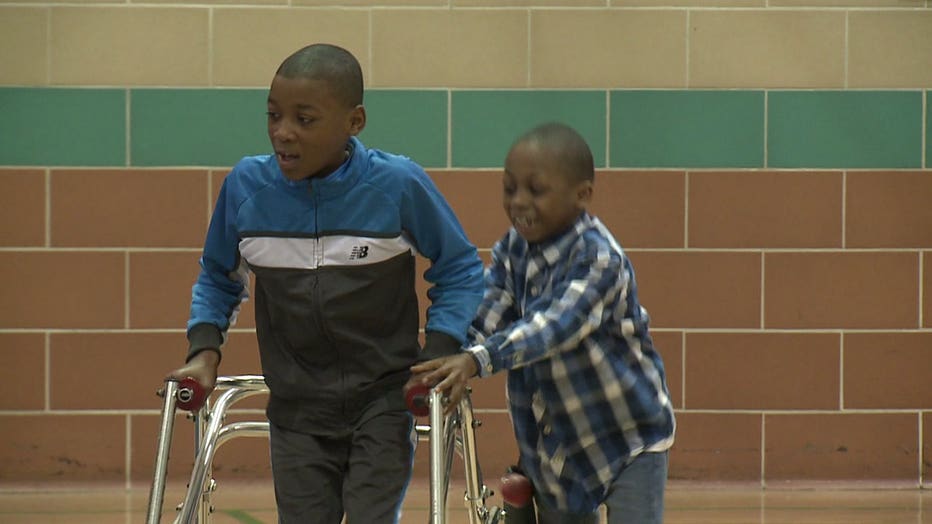 "He's cool. I can play with him when I want to, and he shares stuff with me," Nickerson said.

"They are genuinely best of friends," Carrie Paterson said.

Paterson is their physical education teacher. She has been teaching at Gaenslen School for 30 years. It's a school for able-bodied and special needs students.

"It's been kind of a growing period. At first it was all self contained. The special needs kids all stayed to themselves. And now our program is very inclusionary," Paterson said. 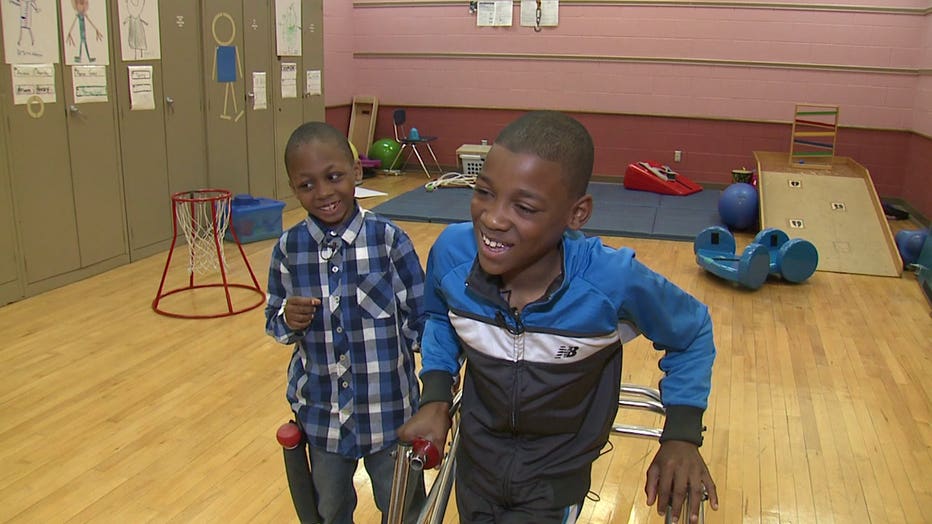 It is that inclusiveness that has given Nickerson, who has been in a wheelchair for most of his life, and Glass, who is blind a chance to enjoy school and their friendship.

"We sing, dance, play outside, play the drums, go in a PT Cruiser outside and sing Uptown Funk You Up by Bruno Mars," Nickerson said.

"I love that song!" Glass said.

But there is much more to this special friendship than singing and dancing. 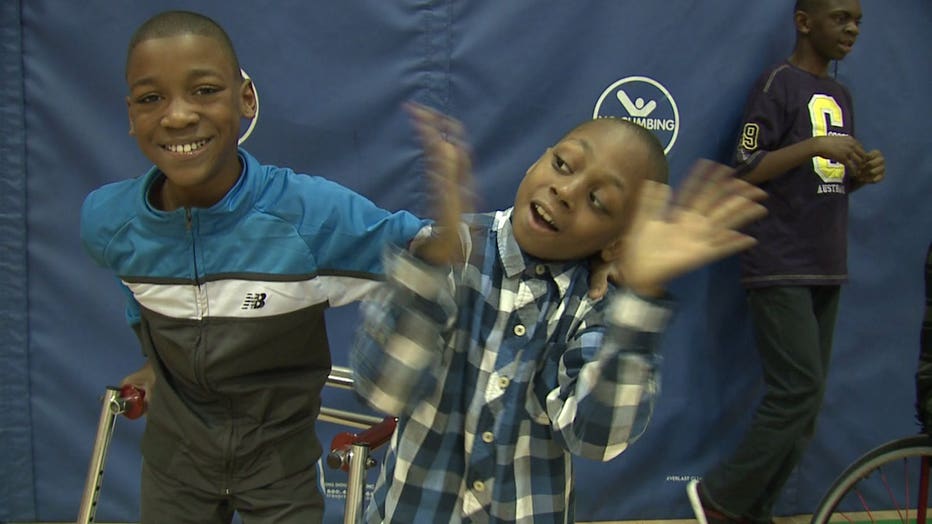 "Sometimes he feels like my little brother. I have to take care of him because he's my friend," Nickerson said.

"It's the right hand man. Javon being blind -- he can follow cues and be independent and do all those things on his own. But there are some things that still need help. Cleveland is his right hand man. He keeps him where he needs to be. But he allows him to be his own self too," Paterson said.

"We're trying to really make that the culture of the room -- just being able to be good helpers, good sharers, good friends. And I think those two have really kind of become the epitome of what that relationship looks like, how you give and take," Martha Reiser said.

Reiser is a physical therapist for MPS, and she's worked with Nickerson throughout his time in the district. 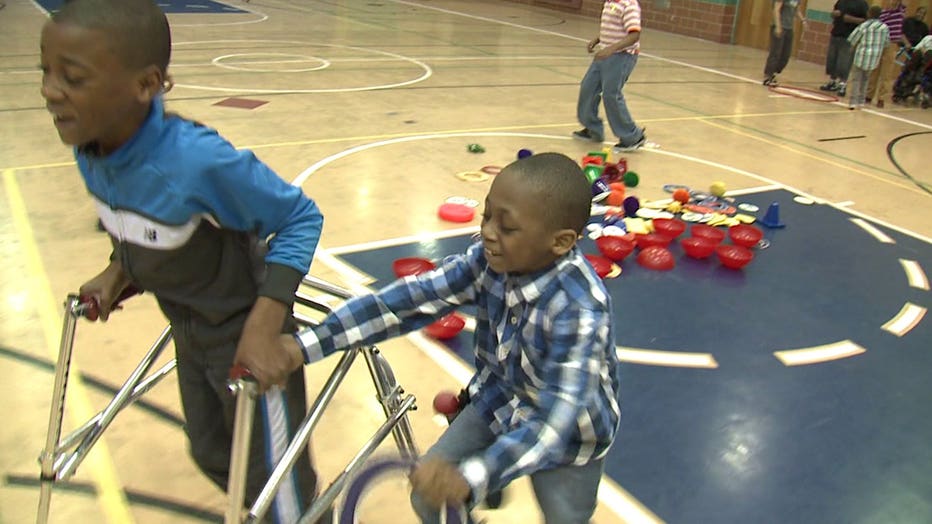 "He's a kid who started out using primarily a wheelchair. Now he uses a walker," Reiser said.

However, Nickerson isn't the only one grabbing onto the walker!

"At the beginning of the year, we started, he started to hang onto my walker," Glass said.

Glass finds the walker helpful and freeing when it comes to his blindness.

But it's the sound that Glass makes when he's holding onto the walker and getting ready to burn some rubber.

"Cleveland is proud of being the guide and he's proud of what Javon can do. And so you see the enthusiasm. Like I said, it just radiates off of them when they are together, working together," Paterson said.

Their friendship and teamwork paid off as the boy who was once restricted to a wheelchair and the other who cannot see competed in the 50-meter dash during the school's track meet. 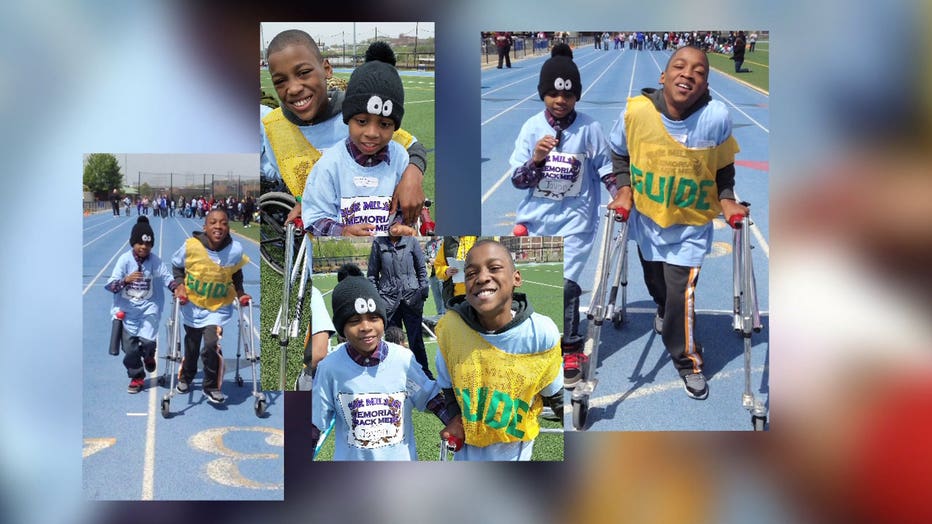 "I said 'hey Javon, why don't I be your guide for the track meet?' He said 'yeah.' We started running and we tried it out at first and it was good. So ever since then, we've been doing it," Nickerson said.

"It makes me feel good because I just love it!" Glass said.

There is a lot of cheering at Gaenslen School from staff members, the students, and of course Nickerson and Glass, who cheer for each other.

"Because he cheers for me, he claps for me and I get a confidence boost," Nickerson said.

"The fact that they have grown in their own rights has made me beyond proud of Cleveland and Javon. And their efforts to work as individuals and to work as a team, it's exactly what we do every day, what we think our job should look like when it's done," Paterson said.

This is what friendship is supposed to look like, as well.

"The reason why I like that because he's my buddy and he's my friend," Glass said.

"He's just like my little brother and I love him as a brother," Nickerson said. 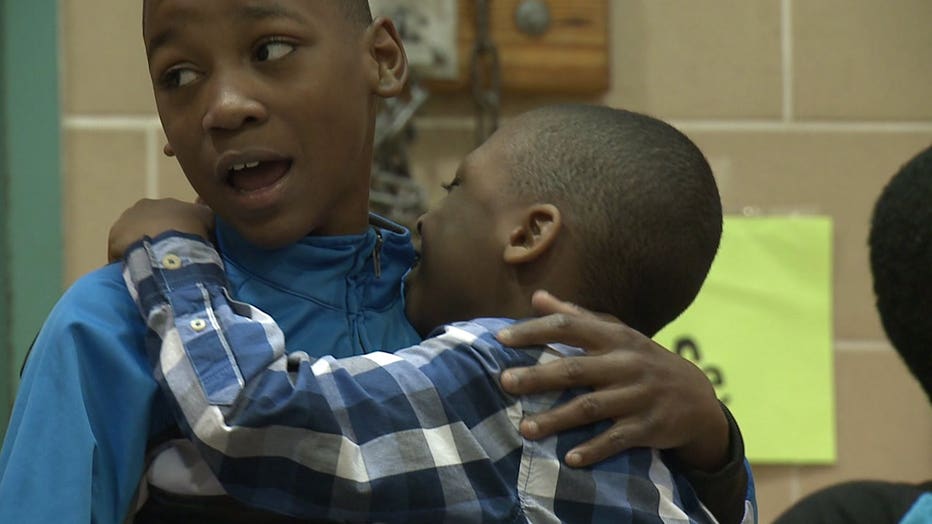